Ring. I’ll get a position right in this office eventually. Won’t I? So tonight I wanted to talk about celebrating failure. Bah bah bah bong. You may say, “Why on earth would you want to do that? Failing at something is pretty bloody depressing.” Well, I’m not going to list all my failures because we’d be here for a very long time, but I do know that… Actually, I believe it in my bones, that every single one of those failures is just getting me to, you know, somewhere better and hell, at least I don’t give up. On my manifesto. Actually, let me grab that manifesto. Manifesto? Here’s the manifesto. My little… If you haven’t already got this, you can go to samanthaleith.com and it is in the download section, and you can download it as a little screensaver. But in here it does say right at the very bottom… Probably should put at the top. Celebrate failure, it means successes around the corner. And I do genuinely believe that.

A couple of weeks ago I spoke about Ash Barty and her and the Australian kind of tall puppy thing. And I just, after the French Open, I think there was some stuff in the media that I don’t think she deserved, and I think we should have treated her better. But anyway, that’s beside the point. She lost at Wimbledon a couple of days ago, and I say lost because well some people go, “Oh she lost, you know, she was world number one, and then she lost at Wimbledon. She got to Wimbledon, people. Like enough. But I think the grace with which she handled that loss, or as some might say, failure just has got her… And I know, let me preface it by saying I know sweet FA about tennis, like nothing. All I know is, in Australia in particular, we seem to have had our fair share of dickheads recently in the sport that I do see play out on media and talk about things. 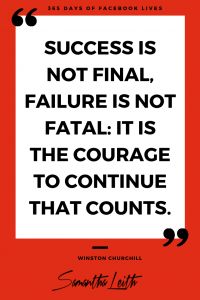 And I go, “Oh, really?” No, we need better sports people as examples for our children, especially. But I want to read you what she said in her press conference. I just love that she said, “Today wasn’t my day. I didn’t want a tennis match. It’s not the end of the world. It’s a game. I love playing the game. I do everything in my power to try and win every single tennis match, but that’s not the case. Today, it’s disappointing right now. Give me an hour or so and we’ll be all good. The sun’s still going to come up tomorrow.” Yes, and I can tell you, if it’s a tennis match or if it’s a business where you’ve lost $100,000, $1 million, if it’s someone you asked out on a date and they’ve said no, the sun is still going to come up tomorrow.

When you’re still breathing and you get to get up again and try something else or try the same thing again with a different methodology or a different attitude or a different team, then it’s still a good bloody day. I just wanted to cover five things that I think are good little tips about how to celebrate… I’ve got a itchy chin… How to celebrate failure. First one is celebrate that you took the chance that you did something. Do you know how many people go to their graves wishing they had written the book, wishing they’d contacted their high school sweetheart, wishing they’d learned how to polka, as in P-O-L-K-A, not P-O-K-E-R, they’d had a business idea.

Can you imagine if the Atlassian guys, who are now like two of Australia’s wealthiest people, if not the… I don’t think they’re quite the wealthiest, but their company is worth a bazillion dollars. I’m pretty sure when they were starting in their humble beginnings, they had a few of their fair share of failures in what they were doing, and they just kept at it. So every time something happens, celebrate that you actually took that chance to do something. Use it as a motivator to try again or to try something new. Evening. Because it is a motivator. Okay well, tick, Method A didn’t try. Let’s try Method B, C, D. There’s lots of letters in the alphabet and there’s a lot of numbers, so you can keep going on a different route. See it as a stepping stone like I do, like I genuinely do.

I could be.. People that have done dirty on me over the years in business, as well, I could be a hard ass about that stuff. But what’s the point? I do genuinely believe all of it is just a stepping stone on the right direction. You know? I’m going across the pond, stepping on the stones, and I’m going to get to the other side. Let it feed a fire in your belly. Like, oh, it’s like, “I know I’m nearly there.” Like let that fire just invigorate you and help you try something else or work that little bit harder. You know, sometimes a failure can just because you put in 95%, you know? I know I’ve had to be really honest with myself sometimes when I’ve failed at things and gone, “But I tried everything,” and if I sit down and really look at it, I didn’t. I absolutely didn’t. I was not 100% committed. I was not 100% on the right path. I did not do everything in my power. I did not hustle like a mofo. I didn’t do all the work. That’s why I failed.

So yeah, be honest with yourself on that one. Another good one to remember is, remember Thomas Edison. You know the light bulb? We’re all using them. I should have actually looked up the quote before I did this, but he, somewhere along the line, he said he didn’t fail 10,000 times, he found 9,999 ways it wasn’t going to work. What a great attitude. Don’t direct quote me on that. But that’s the attitude you need to have with failure. Another one is, share your failures. We keep them bottled up, like a little protection thing. “Oh, I don’t want to tell anybody. Oh my god. If I tell tell somebody I’ve failed, it makes the failure even more so.”

It’s just not true. Because you know what? Like someone might hear the message of that disastrous whatever, insert thing here, and go, “Oh wow. Okay, so that makes my little X, Y or Z not seem so bad.” Or they might look at that and go, “Oh, they failed trying that that way. I bet you if you did it this way it’d work.” It could spark an idea, like it could generate someone. You could really help someone’s heart. I know I’ve talked about, in the past on my blog and in talks and all various ways, the two greatest fail… Biggest failures in my life were my two suicide attempts. And I think me talking about those, one at 11 and one at 21, is a big thing. Thank God I failed at those. But when I’ve shared my story on those things, why they happened and what I learnt out of them, et cetera, I think that’s a big deal. Share failures, people. Don’t be afraid of them at all.

That’s about it all of the sudden, on failures. Tell me how you failed. I’ve just listed two of mine. Do you want some others? There was the retail business, there was the show I couldn’t sell any tickets to, blah de blah de blah de. Oh, there’s that person I asked out on a date because I really, really, really liked them. And then I kind of called them a few too many times and didn’t take the hint. Man, that was a big failure, but thank God we’re not together. Oh, that time I didn’t get married. Oh, a bit of a failure at the time. Felt terrible. You know what? Thank God. So don’t be afraid of failure, people. Do not. I genuinely believe I’m on the right path now, and I’m on that right path because of all the other shit. So don’t let it get you down and have a great night. Oh, and, I can never push the finish button.