Good afternoon. It’s Sam. How are you today? So today’s live, is brought to you by the Samantha Leith manifesto, which you can download on Samantha Leith dot com. Or you can download it… if you asked me really nicely, I’ll give you a real one. You could do what I’ve done in my offers, which is, oh, where is it? Have a huge one on the wall, I think, can you see that? It’s my kind of rules for life. And so, every week or so, I go through one of my little manifest servings for life.

And today, because of some stuff that’s happened, and things that I’ve noticed around me and in conversations with people and in conversations with clients is, I wanted to talk about my line where I say, “Beware of the dream stealers.” Now, these are not those funky dream catches the swing in your bedroom and catch your dreams as you have them and take off the scary ones and keep the good ones.

And as you know, I talk a lot about the pool that we have within ourselves enough that we don’t need that from external forces as well. So, dream stealers, can be coming from a really good place. Okay. They can genuinely… I’ll give you an example. When I was younger, my parents would always say to me, they’d encouraged me to sing, absolutely. And they’d wait for me for hours outside of rehearsals or they’d drive me to Timbuktu to do shows. And my mom would be… I’d be lying, I remember lying on the dining room table with soup bowls and my boobs as she sewed in feathers into a costume. They were very, very encouraging.

But on the flip side, they constantly would say to me, but it’s a really hard profession. Very few people make it in the singing industry. Most people that have become really successful in the music industry get hooked on drugs or they have terrible problems. They never have relationships. They never make good money. So you’ve got to have something to fall back on. Got to concentrate on your studies. So, there was this flip side. So, they did it from a place of love, absolute love.

They wanted the best for their daughter. Now, what I did with that information and how I processed what they were communicating, well that’s my… I’ve got to own, take responsibility for that. What I did with it, that’s my jam. They were just expressing how they felt and it was absolutely true to them that people in the entertainment industry suck and they don’t make money and the ones that do get really successful are bitchy, snobby ass, egocentric maniacs, or hooked on drugs. So, was true to them.

Then there’s the dream stealers who are afraid that if you become successful, you might leave them behind. You’re not as important to them. You’re not as, you don’t value them as much. You are going to, all of a sudden, get that amazing book deal and you’re going to end up living in a Villa in Tuscany writing cookbooks. 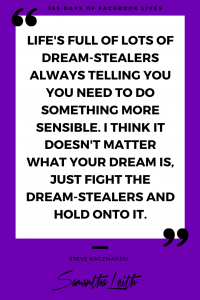 Yep. I don’t know why that came to me, but they came to me. And you’re going to leave them in cold Tasmania and never speak to them again. So, when you tell them that you want to write cookbooks, they’re going to be trying to keep you away from that because they don’t want you to leave them. And sometimes when you are saying things like that, they’re like, “Ah”, and they get a reflection that they don’t have those dreams. So, is something wrong with them because they don’t have big dreams and goals like you do? And that can be really confronting for people.

So they’ll try to drag you down. Okay. And again, I don’t think its coming from a nasty place. I don’t think it’s… I think that those kinds of dreams are, I think, insecurity really on their part is what causes that. So, I think… and then there’s narcissistic sons of bitches who are trying to hold you back and make sure you don’t succeed. So, hopefully, in the talks we’ve done about boundaries and other things, you’re going to spend less time and less energy with those narcissistic, crazy mfs and that’s not going to be… or, you’re just going to set up better boundaries.

I will never tell you that, and I will never suggest that you need to cut out or cut off all negative people or dream stealers out of your life, like cancerous kind of cells and you’ve got to get rid of them off your shoulder. I’m never going to say that because sometimes the most negative dream stealers in your life can actually be the people closest to you. They can be your partners, your children, your parents, your siblings, people you really care about.

So no, you don’t, no, I don’t think you need to cut them off. And I don’t recommend it. But you can definitely set up better boundaries so you don’t have these kinds of issues. The second group of dreams stealers I wanted to talk about, was yourself. You can actually be your own dream stealer, which sucks. Don’t do it. It’s my recommendation. So, how you’re your own dream stealer is, you have this dream, you have this vision and you’re like, “Yes, I’m going to do that.” But then the fear creeps in, doubt creeps in, insecurities creep in.

Then you go, “Oh, but if I do this, then I’m not going to be able to visit Auntie Jane every Sunday for coffee because I’ll be busy. So I better not do that because that coffee’s important. If I go for that dream, I might not have enough time to spend with other people that I care about.” Or, “Oh my God, will shopping at Louis Vuitton suddenly become more important?” I’m joking on that one because I hope that’s not how you think.

That’s one thing. The other one is share what you like. They’re going to go a bli, bli, bli, whether it’s from a caring place or whatever place it’s coming from and you just learn to tune it out. You learn to not listen and that’s again, a boundary thing. Boundaries are a big thing. They really are, people, we’ve got to get good with boundaries. But learn to… not actually listening to what’s going on around you when it’s something that’s really important to you.

You need to learn that anyway. That’s a really important one. A third way to help deal with this dream stealers is, just working on your confidence. The more confident you are and the more cemented you are in your dreams and your visions and your goals, the less any of that is going to influence you at all. You’re not going to need to try and tune the voices out.

You won’t hear the voices. You’re that cemented in your goals and your vision and your dream. Okay? When you’re at that level of confidence, magic happens. Magic, magic, magic happens. Fourth way, I would suggest to help with dream stealers is, get a coach. Get someone that is on your team and wants to see you succeed. Now, I’m not necessarily talking a life coach or a business coach.

Whatever it is you’re doing, if your goal is to be a weightlifting, one of those bodybuilder type models, when they do the sculpting model things, random for me. You get a coach, don’t be with that. You’d have a fitness coach, you’d have a nutrition coach, you’d have a probably a coach that helped you with your spray 10, what the level of glistening is, and I’m not degrading that at all. Please don’t think I am.

That just randomly came to me because it’s not something I’m interested in. So I don’t know the terminology. But if you want to be a musician, you get an instrument coach. You might get a vocal coach. If you want to be speaker, you get at a speaking coach. You might get an accountability coach, a business coach or money coach. There are coaches for everything. And when you have a coach that’s in your corner, part of their job is to not steal your dreams. If they… part of their job as also… if your dream is ridiculously out of the park and that’s, for where you are now, because don’t forget, I believe we’re all limitless and no dream is impossible, but it might be improbable for where you are now.

So, they’re not necessarily stealing your dream, they might just be bringing you into line of what you need to be looking at for right now where you are in life. But it’s their job to be that for you and be that support for you and that guide in those dreams. So, there are my four tips for, bewaring the dream stealers. As I said, it’s on my manifesto, which you can grab from, Samantha Leith dot com. Best site to be on. Oh, that rhymes. I’m so funny. So, have a great night. I will keep doing these. You might not need the one, buy good shoes and handbags, but you know, that goes without saying, bye.