[365 Days of Extraordinary] Day 55 Transcript: What Drains Your Energy?

Good evening. Happy Saturday, it’s with the happy day things. I think I’m getting used to this on my laptop thing. Maybe the phone’s better. We’ll do a bit of an experiment. I think there’s a bit of a delay with a bit out of sync. But we will cope. Tonight, I wanted to talk about, actually I wanted to give it an announcement and I wanted to talk about, what should I do first? I want to talk about what drains you. So I did find this quote, “Avoiding things that drain you is more important than gaining energy”. And that really resonated with me. It was like, Ooh, that’s just so true. Because we all know there’s some things in our lives that drain us. We all know that, we all know that. So you know when you’re feeling foggy or a bit tired or apathetic or you’ve just got the can’t be, the word, .

So what is it that causes that? Absolutely sometimes it is totally lack of sleep and you’re just tired, okay? These are the usual suspects, like coffee, dehydration, you’re working too hard. Stress is a massive, massive brain and energy drainer, vitamin deficiencies, too much booze, too crappy food, lack of exercise. Yes. Lack of exercise drains your energy, which is weird because you’d think it’d be doing too much exercise, which is also true. Lack of inspiration. Absolutely. Lack of inspiration. That’s on my next list of question. Another one is your hormones. So when your cortisol drops, your brain capacity and your energy and all of that goes bottoms out with it. So we’ve got to watch that.

And as I said, sometimes you just can tired, okay? But some of the ones you might not realize, not like this gorgeous puppy here. The things that can drain your energy and your brain capacity, things like toxic relationships, lack of inspiration, unfulfilling work is a big one, people. Drama, too much drama in your life. Email. So checking email first thing in the morning or checking your email late at night, totally drains you. Totally, totally, totally drains you. Do not do it. It’ll drain you so much at night that when you sleep you think you’re sleeping well and you’re actually not, because you’ve been on your email. And when you do it first thing in the morning, it sets you up to be drained and not at capacity all day.

Social media, big drain. Many people I know, myself included, are really taking a bit of a backstep from a lot of social media. Maybe a bit more choosy. Choosy I should say about what we’re doing on social media, what we’re sharing, who we’re talking to. Because it is a time drain, energy drain, brain drain, so steer away from too much of it. 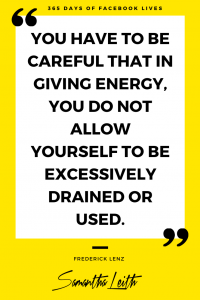 Over-thinking, Oh my God, is a big one on my list. I’m an absolute, absolute, bonafide, Oh, Charlie, over-thinker, all the time. I used to say to my mother, she was an awfulizer and yeah, I can be an awfulizer too. We have those little pitter-patter chatter in our heads instead of it and you’re overthinking. By the time you’ve thought so much about a topic, or about a situation, or about what’s going on, you actually too drained to cope with what it actually does happen. So it’s just defeat the purpose of thinking in the first place. Big drain at business environments is actually meetings. Meetings are a massive drain on everybody’s, time, energy, effort, resources. Because you will get there, there’s- Really, Charlie? Hi, everybody. Hi. Yeah, look, Charlie, you’re on the camera.

By the time you actually get to the meeting, everyone’s not at capacity, totally not at capacity. We generally have too many people at meetings. We don’t have good enough agendas. So if you have to have meeting, keep it brief, have an agenda. The fewer of the people the better. And in an environment, not necessarily under great big light and an air conditioning, so get out. I have it in a coffee shop, go for a walk, do something like that. And then that meeting might drain you so much.

Clutter. Oh my God, clutter’s a big drain. At the moment, I’m not liking my bookshelves. I think they’re a bit too much stuff on them. Since making my head space a bit and that straining. If you takes me a couple of minutes to find something on that bookshelf, that’s wasting time. That’s draining energy. So the more clear your space in your surroundings are, your desk or, I do not believe it when people say don’t trust anyone with a clean desk, the people with the messiest desks do the most work. That’s absolutely bullshit. Totally, totally think it’s bullshit in my experience. Prove me wrong, somebody. Yeah. Too much clutter drains everything.

Biggest drain in a lot of people’s life these days is people pleasing. Yes, because you’re so busy on all the external, trying to please people by getting somewhere or doing something for them. We’re making something, something, something’s done or agreeing to something you don’t care about, or something you don’t want to do, or something that’s not in your, scope of your job in a job situation. And you send all that energy by doing that and by the time you have to get to something that you need to do like cooking dinner, or getting to the gym, or making sure you have done or finish a task that you actually needed to get done, you’re too drained. Your brain’s gone. You’ve exhausted physically, your cortisol’s bottomed out. And you’re not going to get it done.

You’re dring me bonkers now, Charlie. Sleep. Yes, sleep. I’m a seven to eight hour girl. Like I just don’t function well if I don’t get it. I just don’t, I never have and I’m an early morning riser so by this time of night I’m drained. Hence my announcement. I’m actually going to start doing more of these in the morning because it’s just my peak capacity time. And a lot of people don’t watch these live anyway. I’m getting people are watching are all sorts of times there online. So we’re going to mock it up a little bit. So that’s my little announcement on that one. Because sleep and my energy drain at night, Neh, don’t work well together.

What are you actually doing then before then to feel a bit drained? And asks yourself when you’re working out the habits that you’re finding is draining you, ask yourself what it is about that habit that’s actually serving you? Because we don’t actually do things unless there is a benefit to us in some way, shape, or form. Now that might not make sense to you, because you’d be like, well, why would I bite my fingernails? That’s just not a good habit. It’s still serving you in a way that biting your fingernails habit is probably distracting you from thinking something or it’s distracting you from doing something. It might be causing you a little bit of pain, which is serving you and I’m seeing I’m hopeless on punishing myself kind of way. There’s always, always something you’re getting out of a habit, always. So when you look at it and if it’s something that really drains you, think of what else, I’m going to join you.

Yeah. Pick a habit that you finding is draining you, when you look at your day and you’re going, okay, yeah, by the time I get to six o’clock, I’m an absolute brain fog. What happened in the afternoon? What did I do? What didn’t I do? Oh we have that three o’clock meeting every afternoon. I have a coffee at 2:30. I haven’t been out of the office since 11:00 AM, I haven’t had any fresh air. Look at all of those things and go, okay, what am I getting out of all of those actions? I get the interaction from talking to the person when I’ve got to get the coffee. So that’s kind of I get, a good interaction. What’s the benefit of me sitting at my desk for four hours without actually seeing sunlight? Well, I’m making myself indispensable. I’m feeling really important because I’m getting stuff done.

There’s always something. So when you look at those habits that are draining you, find out how they serve you, and then you can take the steps to change the habit. So what could you do? Getting out of the office and still achieving things. You can flick it, but you can’t do it unless you know what the habit is and what the benefit is of the habit. And I’m not talking about the habit loop that I’ve discussed before with the reward that you get from performing the habit or having the habit in your life, talking about the kind of more emotional benefit to it. With like the work one is a great example. Because we all want to feel wanted and needed, because it’s a basic human desire. So that’s my challenge for you. Look at the stuff that’s draining you.

Cut out that. No, I’m not going to say cup that three o’clock coffee because I like three o’clock coffee. But yeah, look at the things that are draining you. For me, social media has been a massive one. Hydration, massive one for me. And over-scheduling and people-pleasing. That’d be my biggest ones. And I am working on them. This 365 days is an adventure on working on them. So good luck. Work out what is draining you and let’s get rid of it. Okay, we can do that. Have a good night and I’ll talk to you all tomorrow. Oh, and then I don’t know how to press end or, yes, I do. There we go. End my video. End.