[365 Days of Extraordinary] Day 10 Transcript: What kills your confidence

So funny, you might have just caught me having a bit of a rearrange. Hello, good evening. Tonight I’m going to talk about what actually kills your confidence. No, it’s not a deckly murder, but confidence, as I’ve talked about before, confidence is a muscle that we build. As we get more confident, we get these little chest… not chess piece, I haven’t played chess in my life. It’s like a jigsaw puzzle, and once we’ve got it all full, we’ve got this beautiful picture. We’ve got our confident self. 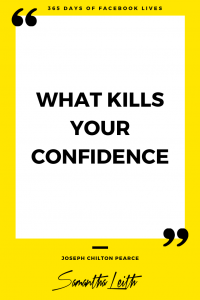 So, a few of the things I want to talk about tonight was what some of those things are. Some of them you might actually not think would do it, but they do. Number one I think in killing confidence is being a drama queen. Now, I mean that dramatic, “Woe is me, life is terrible.” Or, “Look what that person’s done. It’s not good enough.” Well, that dramatizing of your life. I can be a drama queen at the best of times, but I tend to do it in a more exciting, flamboyant way than that negative stuff. But you continue to be a drama queen like that negatively, and it will impact your confidence.

Another one is perfectionism. I’m a self professed PPP, people pleasing perfectionist, but that constant drive for perfectionism will kill your confidence because no one on the planet is perfect. As I have taught Elodie, even the word perfect, everybody’s got a different definition of it, so there is no such thing. Don’t strive for perfectionism. Get away from negative people. Negative people around you will kill your confidence. They’ll sap your energy, drain you and kill your confidence, because you’ll say, “I really love this…” I’m about to pick up a book. “I really love this book that I’m reading at the moment.” Look, here we go. Perfect example. I really love Daring Greatly. They’ll tell you something bad about it and then you go, “Okay, well I’m stupid. I liked that book and they didn’t like it, so I’m not good enough.” Don’t do that.

Another one, that one is approval seeking. If you’re doing something new in life, a new business, a new partner, tell people you’re doing it. Don’t say it to them hoping they’re going to come back to you and go, “I think that’s a great idea,” because they’re not. Don’t seek approval. Comparison. I can’t say the word actually. Comparisonitis, comparitonitis, whichever it is. But when you’re comparing yourself to others, your confidence will just get chipped away at and completely broken. Making excuses. If you’re having a confident week and all of a sudden two days in a row you make an excuse to… we’ll go to the gym, for example. Not go to the gym because it was raining, it was cold, you stepped in dog poo the day before and you didn’t wash your sneakers, anything like that. Or you’ve got a bit of a sniffle. By the time you get to day three, your confidence is greatly impacted, so stop making effing excuses.

Facial expressions. Did you know, it takes more muscles to go? That’s so unattractive, isn’t it? Shall I do it again? Than it does to smile. Smiling is really good for you. Just that smiling and lightening your eyes and your face will actually make you feel confident. So, smile as much as you can. Unrealistic goals. I’m a goal setter. As you know, I’ve got to run a whole program, I teach people on how to set goals and achieve them. But if you set unrealistic goals, every time you don’t get one of those ones, it’s going to chip away at your confidence and eventually break you, so goals have to be attainable.

Awfulising. This is something my mother did all the time. You’re going to the shops that day, and before you’d actually left for the shops, “Well, you know, what is I get to the shops and the shop that I really like doesn’t have the clothes I like and then I’m not going to be able to have the lunch I like because I’ll be running late and I won’t be able to do that.” Awfulising, gets rid of your confidence.

Ignoring your gut instincts. If you really feel something in your gut, fight or flight is there for a reason, and if you feel something, go with it. Trust your gut. The more you trust your gut, the more you’ll boost your confidence. You don’t trust it, again you’re chipping away at it. Exercise. Yes, exercise boosts confidence. Think about it. You run, you get the endorphins going, you might get a bit of a dopamine rush, flushed cheeks like I did from the gym tonight. Exercise will actually make you feel more confident, regardless oof why you’re doing it. Doesn’t matter if you don’t want to be crossfit champion of the world or Miss Universe or any of those things, the more exercise you do, the more confident you will actually become. Just something little every day, whether it’s run around the block.

Procrastination. “I’ll do it tomorrow. No, I’ll do it tomorrow.” Do you know how many times I’ve thought, “I don’t want to do this live stream. I’m not sure.” Don’t procrastinate. Just do it. Lying. Oh my god. One of the things… I don’t think enough of us admit how much we lie to ourselves, to other people, and they can be teeny, tiny white lies. “I only had 30 grams of cheese on my salad,” when you had 300 grams of cheese on your salad. “I only had one glass of wine.” I didn’t tell you it was a 400 mil glass. “No, I’ve done that, I just haven’t sent it.” You didn’t do it. Those little white lies, you may never, ever, ever get found out, but they will, again, scratch away at the surface of your confidence.

Victim thinking. “It always happens to me. Why does something bad happen to someone so… yet again it’s happened to me.” The more you do that, the less confident you’re going to be. There might be a logical reason why some of that shit’s happened. Step out of it, think about the logical reason and stop the victim mentality. Social media. Oh my god. We all love social media. Yeah, I’m on social media, but social media is an absolute confidence killer, because we get in there and we’re scrounging. It’s that comparison thing again. But as much smarter people than me have said, we’re looking at someone on social media and we’re looking at where they are now, like their endpoint, and comparing it and thinking our lives suck when we’re at this point. What we need to do is go, “That might be aspirational, but it’s not a comparison. It’s not a I haven’t done as well,” because you don’t know.

Some of the statistics I’ve heard about people, starting with their Instagram followers, they might be an influencer now, but for the first three years on Instagram, they had like 100 people following them. That constant drain of social media and seeing what everybody’s doing, and I need to be doing this… hi Nick, hi Rupert. It’s again a confidence thing. If you are on social media, and most of us are in our businesses, get in and get out. Don’t spend a ton of time in there sucking away at your confidence.

Needing to be right all the time. It’s a big ego thing, because when you’re confident, chances are sometimes you actually really do feel like you’re right, and a lot of the time you actually might be right, but if you need to be right and sometimes you get proven not to be right or someone might still be right but they don’t agree with you, that’s going to nick down at your confidence. Have the need to express what you think, express how you feel, express the ideas, all that kind of stuff, but don’t have a need attached to it.

I do talk a lot about courage, but that’s a whole other thing. Letting success or failure rule you. When you get a success in something, your ego gets a boost. You’re like, “Yay, look at me, look at me, look at me. I’m great, I’m confident,” but it’s a false sense of confidence. Likewise, if you fail at something, “Oh my god, I’m absolutely hopeless,” and your confidence drops, it’s kind of actually a false sense of failure, and it brings you into a lack of confidence. Life is this massive rollercoaster of things, and one failure or one success does not make the person, so do not let it rule your confidence.

Last one on the list is something I talk about a lot. I blog about it, I talk about it, I have photos about it, saying yes too often. Oh my god. Saying yes too often, you feel like a mushy monkey, and it totally depletes your confidence. It’s about learning to say, and I don’t also believe in saying no all the time. I’m practicing this year, I’m hoping it’s a life skill I’m learning, but I’m practicing being really thoughtful and mindful about whether I say yes or no. It’s about the right choice for me at that moment. Sometimes it’s going to be a yes and sometimes it’s going to be a no, but I’m not automatically saying yes, which has been my habit for a long time, and then I flipped that and I started saying no to everything, and it really was just cutting my nose off to spite my face. It’s about making a solid decision on those things, and that’s how you keep your confidence stable.

There you go. There’s, I think, 20 odd something tips and things that you might be doing that actually help deplete your confidence, and remember, we want to build your confidence. It’s that muscle. We’ve got to exercising the muscle and get more confident. Have a great night everybody and shoot me a message if you want to know anything or want me to talk about anything in particular, and I’ll see you all next time. Bye.