[365 Days of Extraordinary] Day 107 Transcript: It’s All A Matter Of Opinion

Good evening. It’s late. Sorry about that. Happy 1st of October. Now, tonight I wanted to do a live about bringing in the last 90 days of the year. Due to circumstances, I won’t say beyond my control because I said yes to them, I’m actually going to do that one tomorrow and it will then be 90 days. So, stay tuned for that.

But tonight I wanted to talk about it’s all just a matter of opinion. So, Elodie and I did something this evening. She really wanted to see IT Two, the second chapter. I didn’t at all, but she’d tried to go a couple of weeks ago with friends and couldn’t go because she was too young. So she’s like, “Please mummy. Please mum.” I’m like, “Oh, okay. Okay. Oh God, okay.” My idea of hell, going to a horror film. Just not my thing at all. But here’s this kid who loves drama, loves movies, loves the theater, loves all these things, who’s sitting there with excitement and joy. And we came out of the movie and I’m like, “Oh God, okay, well that’s time I’m never going to get back in my life. And I don’t understand why they had to do this and…” 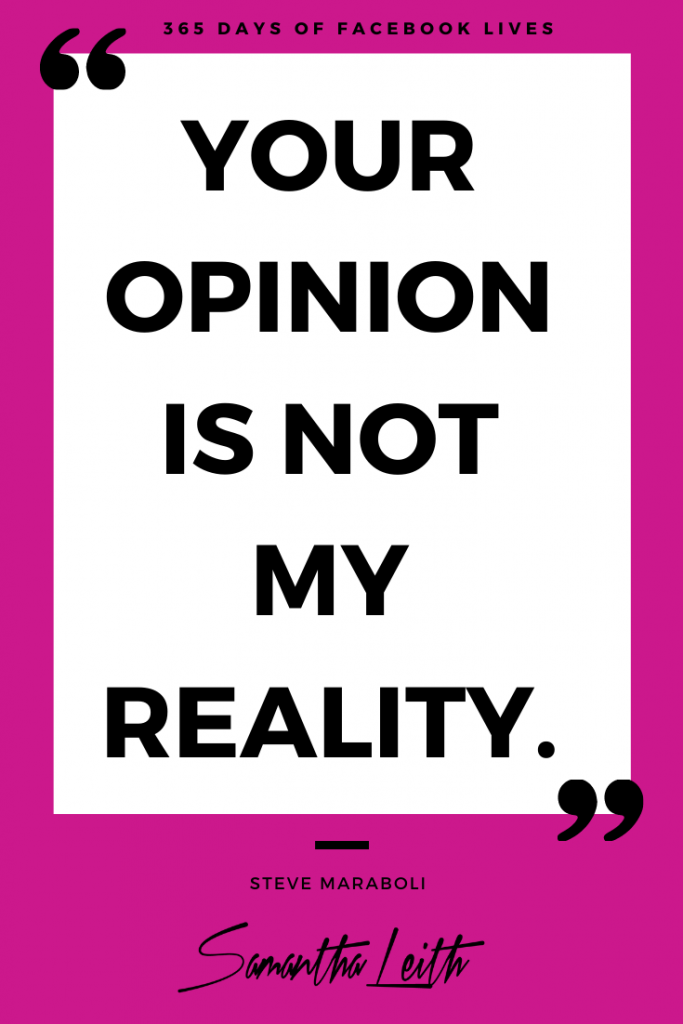 I get that it’s all fear factor and actually Elodie said I should do my live tonight about fear. But this kind of felt better because what it highlighted to me is that we’re two people that live in the same house. I brought her up, so in most ways she has a lot of the same values that I do. She has some of the same opinions as I do. And then others, she has completely her own opinions and we differ in ways, like this movie. She’s come out of it as a great experience because she enjoyed it. She was talking about some of the interviews she saw with how they were talking about the method acting to get into the role of IT and all this kind of thing. And I’m just thinking, I don’t want any spoilers but, “Why did so and so have to happen?” and, “That bit was a bit funny because it was so fake,” and that kind of thing.

And it made me think, “That’s life.” So in business, in life, in everything, you can have something, and I can think this is the best blue pen in the world because it’s got this grippy bit here and I can hold onto it because my handwriting’s dodgy and it makes me write a little bit neater. And it’s got the little things, so then I can turn that off and then I don’t get pen marks on things. So, I think it’s a great pen. The person next to me could pick up that pen. It’s the same pen, and they could think, “That’s really annoying having to click it. That just seems like an extra effort and that’s uncomfortable,” or, “It’s a bit too bulky,” or something.

So, we are so busy trying get people to agree with us, or like the same things we like, or not like the things we don’t like, or agree with us in different circumstances, or like the things we offer to sell, or appreciate what we do for them in so many ways. It’s a searching for acceptance and agreeance in so many things and the reality is we’re all different. I think it’s a great pen, you think it’s a crap pen. I didn’t really like the movie, she loved the movie. I think Marie Forleo is awesome. Other people might not like her hair.

It’s that’s saying, and I’ve said it before, you can be the greatest peach of the world and someone still doesn’t like peaches. I think it’s more. Yeah, thankfully. I think it’s actually more simplistic than that. I think we have to do what we want to do, what we’re called to do, what we need to do regardless of getting that acceptance from people. And it’s really bizarre that a horror movie I didn’t really like made me think of that. But it did. It truly did. Because, whilst I can appreciate the cinematography, I can appreciate there were some great actors in it, Jessica Chastain, she’s just phenomenal, I still didn’t like it. She loved it. So, we had the same conversations about the great acting and about this and about that. But, at the end of the day, even though we had those opinions, we still differ in our thoughts in general.

But now I’m off to try and sleep and not have horrid dreams of strange big clowns going… Oh, I should have had a freaky face for this one. That’s it though. It’s all just a matter of bloody opinion, people. Go with your gut and don’t worry what other people think. Night-night.