Here we go, day 119, day three of the Brendon Burchard INFLUENCER event in San Diego. And I don’t want to do today’s live because if I do the five of the things I heard or learned today, it means it’s all over. And I had such an amazing time, honestly. They are doing the event again next year in San Diego, I think, I think I have the dates in here. Ooh, [inaudible 00:00:30]. No, I’m not an affiliate so I’m not getting any money from this but I can tell you… No, I can’t tell you because it’s not in here. October next year, 10th and 12th or something like that. If you can, if you’re interested in what you say or do having an impact on the world, come, just get here, so worth it.

So, day three, what did I learn? I don’t even know where to start. Isn’t that funny? Oh my God. I’ll start with, we only had… We only had, doesn’t that sound terrible? They’ve been the most incredible speakers. So when I say we only had three guest speakers today, they were amazing guest speakers. But I’ll top and tell Brendon, huh? Maybe not. If you were given the gift of a vision, it’s your responsibility to see it through.

It’s true. Every day you take a breath, every day have an opportunity to do something with your life regardless of what you believe in. And you know… You may not know, I’m not religious in any way, but I do believe that we are put here by whatever it is that put us here to do something. And if you’re given something in your gut, in your head, and a talent in any way, shape or form that you want to see through, then it is your responsibility to do it.

So he has a podcast, Shift Happens, I think it’s called or Schiffers? But he talks about your shift in life, so how everything’s just a shift. We overcomplicate things and try and make things these big, “Oh my God, I’ve got to do this one giant leap,” and it can just be a little shift. So, he used quite a few sporting analogies and metaphors and he did this bit about how the stretch proceeds the success. It really resonated with me because he talks about how runners or athletes, they have to do this stretch, and the stretching’s the bit that people go, “Oh, it’s uncomfortable, I can’t. Oh, I’ll do it later. I’ll do it later, I’ll do it later.” And then, you do the sport or play the game or whatever and you hurt yourself and then you sit on your ass for six months complaining because you got injured doing it, so you don’t do anything. 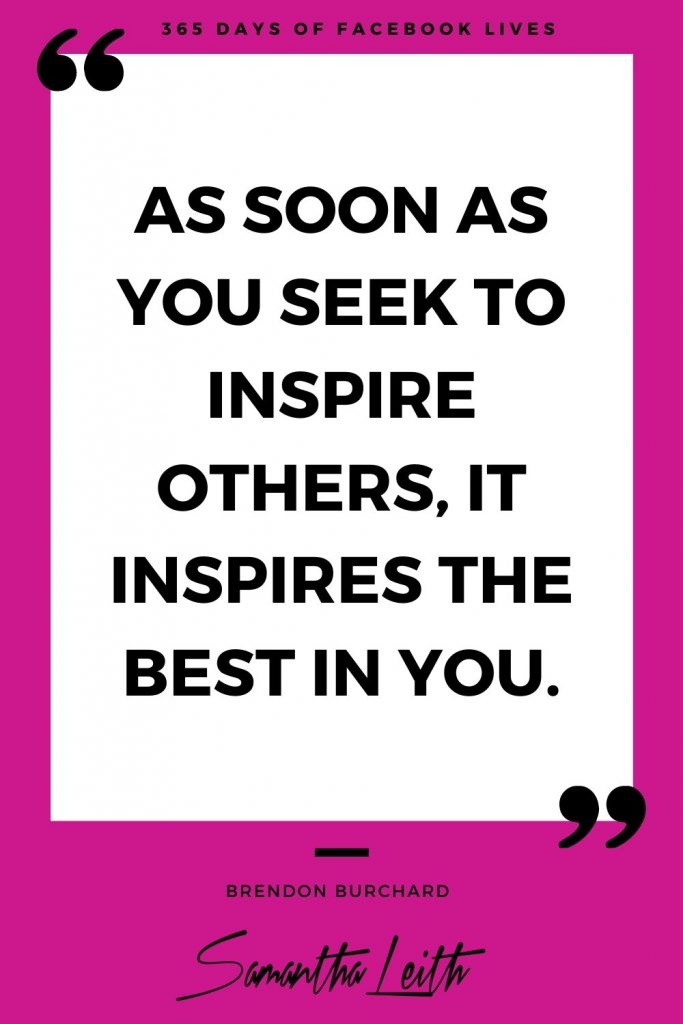 Businesses just like that. There’s so many things in life that are just like that. Going on a diet’s like that. If you want to start dating, the stretch is probably putting up a Tinder profile and talking to things. It’s that uncomfortableness that you got to get into and stretch out your muscles and whatever you’re doing to be able to make that shift to make stuff happen. So that was that; phenomenal. I will now be following him and… Yeah, NFL, I think? Oh my God, the one with the helmets and the tackle field. Oops.

And then, oh my God, I was so excited. So, Rachel Hollis was meant to be talking today. Unfortunately, due to family circumstances, she couldn’t. She talked on day one. So Brendon started doing this introduction about how he had to fill in for someone, get someone in today and how he’d ask a friend and they told him he had to talk to this woman because she’s incredible. She’s part of this amazing beauty empire and she sold it for over a billion dollars. The minute he started talking about it, I knew who was going to be coming to the stage.

And then, he talked about how when he rang her she was actually like, “Well, that’s really funny because I’m coming to your event anyway.” That gives you an idea of the people that were in the room, they were people that had no idea what they wanted to do but felt like they were being called to something, to women like Jamie who sold their business for 1.2 bill—billion with a B—dollars to L’Oreal. Now you’d think, “What the hell does she need to be in this room for?” She’s in this room because she’s changing her life, she’s on another path, and wants to do something with her knowledge and her experience and wisdom and the passion and the heart and everything that she has. I was so excited when she came on.

I’m actually want to buy some of her cosmetics while I’m here because I have a bit of rosacea and I’ve been wanting to try it. Anyway, beside the point. She talked a lot about how she got knocked back so many times like, “No, no, no, no, no.” She had one investment firm tell her no-one’s going to buy cosmetics off her because she needed to lose some weight. I can do that [inaudible 00:07:06], so many things. And she talked about how people had given her advice how not to listen to people and some great tools but that, which I’ll share later.

But she really honed in and I wrote it down twice in different ways, that you cannot listen to who other people say you are from parents to siblings to friends to industry standards, to religious beliefs, to hobbies, anything. Don’t listen to what people say you are because we’re actually all different. We all have a unique fingerprint. We all have a unique DNA. We all have our uniqueness that is us, so don’t let what someone else says about you control who you are. That came through from her just so powerfully and beautifully.

Then we had a guy called Craig [Cleminson 00:08:05] who I’d never heard of, fabulous speaker. Again, big money business, incredible copywriter, so he talked a lot about story and persuasion and how to get the best way, using words, to get what you’re talking about across. One of the things he said… The whole three days, a lot of it has been about authenticity and your story and faith in what you do and your dream and your vision and all that kind of stuff. But one of the things he said to me… Said to me, hah! Like personally came up to me and he said to me. No, said to the 2,000 that was in the room, but it felt personal, was stop comparing yourself to everyone but you. He meant it and he shared a bit more about it in both the positive and the negative.

So, we compare ourselves to people and go, “Oh my God, the size of their ass is fantastic and mine’s not, I’m so depressed.” Then, we might compare ourselves to someone that we have known from past and goes, “I’m doing some much…” Like, “Meh, look what they’re doing.” So we do it in both a positive and the negative. We ego inflate ourselves in comparison and we ego deplete ourselves by comparison. The reality is and the message I was getting from him was we should be comparing ourselves to who we were yesterday and who we’re going to be tomorrow, that’s it. That’s the only comparison we should ever do, who we were and who we’re becoming, that’s it. Who we are right now is actually who we are, so suck it up princess. Anyway, loved that.

Now, I’ve got other stuff to share today and this is going on a bit long I reckon, so I’m not going to do that. But it was just fabulous event and I hope, if I’ve shared anything over the last three days, that you might’ve heard something that meant something to you because it meant a lot to me. I’m going to, as I said, spend some time typing up all my notes and making sense of a lot of it and getting started on the five to dos I’ve set myself for every day. A couple of them I’ve repeated, which obviously means they’re important.

And I want to give a shout out… they might be watching, I don’t know… to my to influencer besties: Eva and Stephanie. Thank you, thank you, thank you for being part of my journey with me. Randomly met them on the first day and they were the perfect people I could have sat with. They held the most beautiful space for me today and really cared for me when I was crying. I’m not going to start now because something happened that really hit me, but I wanted to share what I learned today, not the emotional stuff. Oh, it is all emotional but you know what I mean, so I’ll do that later. But yeah, if they’re listening and I hope they are watching at some point, thank you, thank you, thank you for looking after me today. I really, really appreciate it. If you get a chance, come to INFLUENCER next year because it will be really, really good. And if you’re Australian like me, let me know and maybe we can be airline buddies. Okay, bye.