Day 120, can you believe it? Wow, I can’t. Last night in America, that’s just gone so crazily quick, I wanted to … there’s been so many things that I’ve learned over the last couple of days that I want to go over and talk more about. One of the things that I really thought about a lot today, because I started implementing some of it, was Anthony Trucks and the whole Make Shift Happen thing. Was that I’m one of those people that says, “If I’ve got to do something, it’s got to be major and I’ve got to implement crazy changes all of a sudden.” And, “It’s not good enough to just do a little bit, I’ve got to go all out and just go, go, go, go.” And the reality is, I don’t. And so today I was taking lots of … I went for a big walk, and I did some work, and then I sat down and looked at, what are the small shifts I can do that will make an impact? And there’s so many of them, there’s so many of them.

Now, you’ve probably all heard the story, the tale, the quote about how if a plane takes off and it’s just one degree off, how that one degree off, as it keeps going, and going, going, going, going, will eventually get them to the wrong country. All it takes is a slight diversion and you’re in a completely different place. And all it takes is, if you’re consecutively a minute late for everything you ever do, then you’re going to lose days. If you consecutively spend another 20 minutes on Facebook, social media, if you spend just another 10 minutes a day watching TV or something, those little bits make massive impact. If you round up every time, there’s savings things like Raiz and, in Australia, I was going to say Meerkat, but that’s insurance. Savings things you can do where you round up and just save little bits and pieces, and all those little bits and pieces add up. 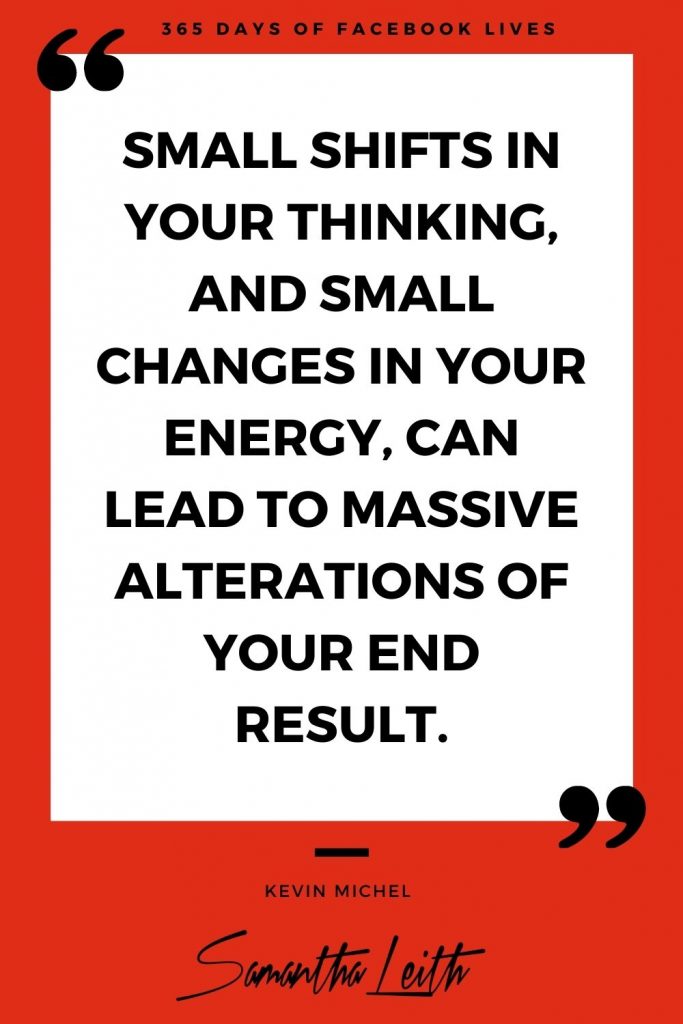 So I think that’s what we need to, for people like myself that tend to bite off more than they can chew, I think it’s really important to take stock of that and look at the small shifts. So is it waking up an extra 10 minutes early to work on a habit, or a business, or something that’s in your heart that you want to get done? Is it if you have, I don’t have sugar in my coffee anymore, but is it if you have sugar in your coffee, is it going from two sugars in your coffee to one and a half, to one, to half, to none? There’s these little things that you can do that will eventually make an impact. Because sometimes when we do the massive things all of a sudden, it’s really scary and then we don’t stick to them.

We create this work for ourselves that is so large that it’s any wonder that anybody succeeds when we set these mountains. When, if you … yes, we’re not all guaranteed tomorrow and that massive to do list that you’d like to get done, even if you’re doing it in small shifts, may never get finished. But doing the small shifts, you’re more likely to do more of it instead of being so overwhelmed and so frustrated and tired and not seeing … you’re climbing, you’re climbing, you’re climbing and you can’t get there because there’s so much in front of you. But if it’s just that one little thing a day, if it’s that, or it’s that three little things a day, nothing overwhelming, it’s things that you think you can manage, things that you can cope with. A bit of meditation … I’m actually, I’ll put in a whole lot of ideas for things that you could do when I finish writing out all my notes, I’ve got a good way through them today.

But again, I wasn’t going to be able to retype all those notes today, so I didn’t set myself that task. I reread them and I made some notes. So small shifts, that’s what, I’ve got to say, I’m going to be working on a lot more when I get back to Australia. Because I have been known to bite off more than I can chew, and I can chew a lot. So good night, I will see you all tomorrow and then I’ll be back home safe and sound the next day because I lose a day. You know what I mean, that weird stuff? Night-night.