[365 Days of Extraordinary] Day 13 Transcript: How to manage expectations

Hola. Happy Friday. Sorry I didn’t get to do my Live yesterday although it is now all better so we’re back on track. Now, what I wanted today’s Live to be about, happy Friday by the way, was about expectations. I’ve been confronted with a lot of stuff about expectations this week and then just serendipitously, good word, that one, a friend of mine, Kirsty, had a quote the other day on Facebook that was, “Stop expecting you from people,” and it just went, wham bam in my head. “Stop expecting you from people.” So we all have expectations. The definition of expectation is a strong belief that something will happen or be the case. So yeah, it’s not just we’re dreaming something and we kind of want something to happen. We expect it to happen. We expect an action from people. We expect a feeling, we expect weather, we expect something.

And then I read this… kind of went down a rabbit hole about expectations, but I read this great thing that was a quote from… Oh my God, I didn’t write down who it was. It was an author. Judith somebody, I think. There are two ways to be happy; improve your reality or lower your expectations. And again, hit me like a ton of bricks. So I had this conversation with a client earlier this week about them accepting responsibility for why they felt so bad about a couple of things because they were having these expectations of people and those people weren’t reacting the way they wanted them to react. And all of this really was making my client feel terrible, like paralyzingly terrible, and had they dropped the expectations and changed the way they felt about what they were putting out there, then probably wouldn’t have felt as bad. So we’re working on that one. 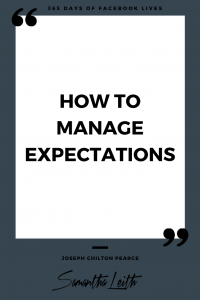 So expect… One thing we’ve got to know is expecting something doesn’t actually make it happen. So you know examples like you’ve emailed someone, you expect them to answer you and you get nothing. It’s like, “Ooh,” the windy email folder with nothing happening. You invite someone to something and they never invite you back. You’re like, “Man, you’ve been to three dinner parties at my house. Where the… is my invitation to one?” You exercise madly for five days and you eat really, really well and you get on the scales and nothing’s happened. You wear a fantastic new frock and you’re like, “Va-va-voom, I feel great. Bring it on, the compliments.” And nothing happens. At the end of… Any of those things happen and you’re disappointed, you’re bitterly disappointed. And when it involves other people, you start to get resentful and resentful… resentment, rather is just like a killer. Killer, killer, killer.

Hi Jenny. So some things we should stop expecting. Okay. Out there. I’m just going to… I will list my top five. Okay. Is wanting people to like you. Stop expecting that. There’s a great saying about, you can be the greatest pension in the world and some people still don’t like peaches. I probably just totally assed up that quote but you get what I mean. Wanting people to change, wanting people to follow your suggestions, wanting people… I’ll leave that one for last, actually. Wanting people to know how you’re feeling. That’s so common in relationships. “I just don’t understand why they don’t know what I’m feeling.” People don’t know, right. And my last one, which I actually think is the biggest one, is wanting people to treat you exactly how you treat them. That just doesn’t happen. And the irony of that is, and is with boundaries and all that kind of stuff… Hey, Beck, is that a lot of the time people are actually just mirroring how you treat yourself and that’s how they treat you.

And that can be it when you hold that mirror up to yourself as like, “Why’s so-and-so doing this, this and this?” And like, “Oh God, that’s what I would do for myself. Oh shit. But I treat them better but I don’t treat myself better.” So they’re holding a mirror up to you. So that can be a really powerful one to actually acknowledge and look at and get on with. Now the benefits of having less expectations, of which there are hundreds and hundreds and hundreds of them… [inaudible 00:04:21]. I got Indian on its way. Is living more in the present. If you’re not expecting things from people, you’re actually kind of just there. You’re not wondering, “Is so-and-so going to do this? Is this going to happen to me? Am I going to get those 500 likes?”

I’m not even looking at the numbers, for example, of how many people are coming on these Lives. I’m getting back to the comments and doing things like that and I’m loving the feedback, but I’m not expecting it. I am doing this entire exercise for me. Well, I’m not doing it for me. I hope I’m giving really good content and that’s my aim, is to give them good content, but I’m not expecting anything in return from this, from likes to comments to clients, anything like that. I’m just putting it out there. Another thing about not having expectations is you get nice surprises. Like if you’re wearing something and you don’t expect… Why am I going back to the frock analogy? Got a new frock on or new haircut and you’re not expecting someone to comment and they do comment, it’s like, “Oh, that made me feel good. Thank you. That’s awesome.” And just take that compliment.

Don’t ever do the… And this will be years to do. Don’t do the, “Oh, I got this on sale” or “I’ve had this for years.” Just take the compliment. Okay. No more resentment. Oh, back to that big word, that poison and that eats at you. You stop expecting things, the chances of you getting resentful about things just drops further and further and further and further and further down. There’s a great sense of peace because you’re no longer disappointed with people, especially with people you care about, whether they’re clients, friends, family. If you’ve got this expectation of them up here and they’re delivering down here, there’s this disconnect which leads to a lot of disappointment. And if you’re not feeling that disappointment, your relationships with those people and how you’re feeling actually becomes a lot more equal and a lot more peaceful.

You no longer get frustrated because in your mind you’re like, “They should change. They should change. They should do what I say, do what I think,” and they don’t do it. You don’t get frustrated anymore because, man, if they’re going to change, they would’ve bloody changed. That’s on them. That’s got nothing to do with you. And so you get rid of that frustration. And lastly, which we kind of touched on all of them, but when you drop expectations and no longer have them, you kind of realize and get to this peaceful place of knowing, and it’s okay to know this, that the world does not revolve around you. I know we joke about that but when you’ve got expectations of people, you’re expecting them… or situations, you’re expecting them to have you on the same pedestal and you’re putting out there that you think you should be the center of their bloody universe because they should be doing what you think, what you say, acting according to the rules that you want to set.

And it’s just not the case. So letting go of them, letting go of that, you realize, “Hey man, I’m not the king of the world,” actually makes you feel better. So I just wanted to do this one because I’ve had to really look at this one this week after talking to my client and helping them through it and realizing where I had expectations that I shouldn’t have and weren’t that healthy. Have a look in your life about what you are expecting from people and where you are getting disappointed, especially that one about how you’re being treated, because I promise you there’s going to be parts of that where you’re actually just getting treated by other people how you treat yourself. So really look at that one. So until tomorrow, have a good night and I’ll see you then. Bye. And get rid of your expectations.