[365 Days of Extraordinary] Day 130 Transcript: Beware Of Self Deprecating Humour

Happy 130. Who would’ve thunk it? So, tonight I’m following on from last night when which I talked about our inability to just simply say, “Thank you,” when given a compliment and I wanted to go that step further to talk about when we use self-deprecating humor a lot, and it is quite an Australian thing and it’s funny. I did a little bit of research on it, and they do say it’s quite closely linked to Australia’s fear and kind of notoriety and the dramas that we have surrounding tall poppy syndrome, and so, self-deprecating humor’s kind of a way of almost like a self check, that we’re not getting too big for our boots.

Now, is that just the most ridiculous thing you’ve heard? So, don’t have an ego because you’re really good at something. Put yourself down in a way that’s meant to be funny so people don’t think you have a big head. I just cannot tell you how many ways in my mind that is totally askew and totally effed up. Now, one of the things I found when I was doing a little bit of research is … I hope you’ve all seen Nanette on Netflix, the Hannah Gadsby piece. Incredible, incredible, and Gadsby said at one point … I’ll just read this if you don’t mind. “I’ve built a career out of self-deprecating humor and I don’t want to do that anymore. When it comes from somebody who already exists in the margins, it’s not humility, it’s humiliation,” and I couldn’t agree any more. It’s spot-on to me.

Self-deprecating humor is used occasionally for a true, true humor use, it can be really funny. Don’t get me wrong. It really, really, really can be funny, and there are some people that are absolute masters of it, but when you’re using it as a mechanism of belittling yourself or of keeping yourself low or of hiding how you really feel or of keeping your confidence trapped, it can be a really dangerous thing to play with, because it’s not funny. You’re just being mean about yourself. You are, point-blank. You’re putting yourself down and there is no need for that.

As I said, there are some comedians that do it brilliantly, brilliantly well, and there’s one I found … a quote I found, which was just hilarious, was an Amy Schumer one, because she’s fantastic. I just adore Amy Schumer and the stuff that she’s doing since she had a baby is hilarious. But she once said, “People are so angry and love to burn someone at the stake, so I’ll just burn myself,” and if it’s someone in that position, when they get taken down a lot, using self-deprecating humor can, apart from being funny in a lot of times, can actually almost be a bit of a defense mechanism, like, “Get in there before someone else does.” Why the hell not? Someone else is going to put you down, so get in there first. 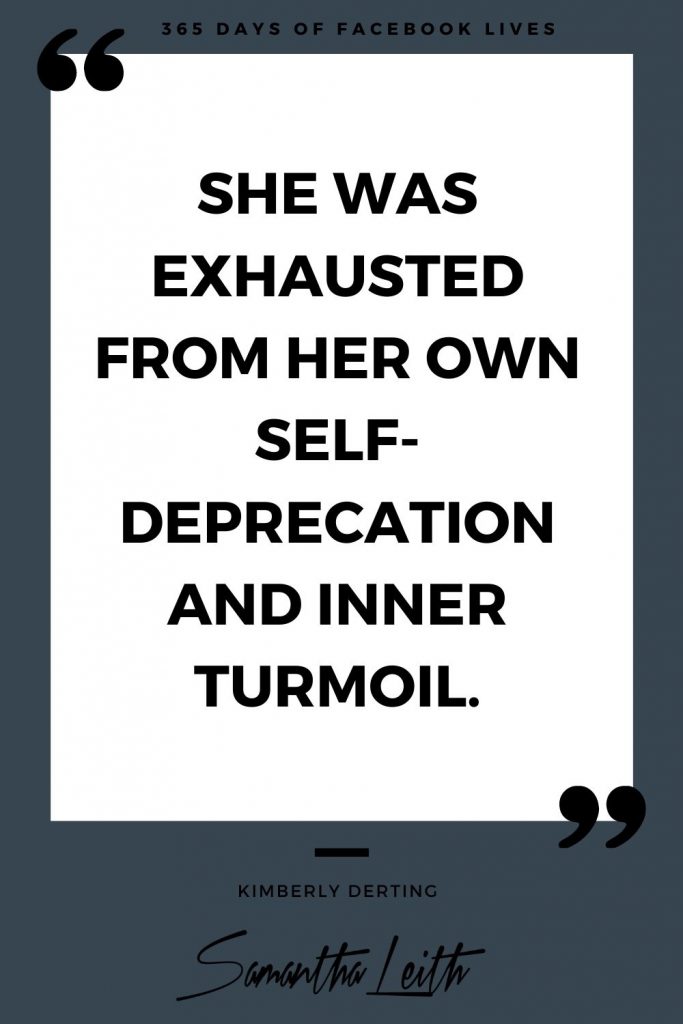 But in dated … we’re talking comedians here. We’re talking people that have … they’ve spent their life, it’s their life work making these jokes and their humor as good as it possibly can be. Their intonations are timed within a millisecond. They know how to make that stuff funny. But again, I repeat, if you’re Mrs. Jones down the road and you’re just cracking a joke about the size of your ass because you’ve actually feeling really insecure about your ass, so you’d rather get in there first to make a joke before someone, so people think it’s funny before someone actually thinks, “Oh, geez. She’s put on a bit of weight. Check out her ass.” It’s not funny, and as I talk about confidence being a muscle where you flex it and you build that muscle up, the more you do things like putting yourself down and using self-deprecating humor and not saying, “Thank you,” when someone gives you a genuine compliment and buffing it off, that muscle’s going to atrophy. It works in reverse.

Those things you do that take a little slight bit, a little dig at it will eat away at that confidence muscle and you don’t want that, people. You don’t want that. So, I encourage you … there’s … I’m not a comedian. I’m not, but I can be funny. [inaudible 00:05:02]. Yeah, okay. Not tonight. Okay, fine. But it’s when you are … there’s a difference between being funny for funny’s sake and being difference … being funny, rather to do that kind of thing, and it’s not going to stop you. As I said, some people think it’s a way of self-protection with tall poppy syndrome, in particular, in Australia. I can see where they’re coming with that, but I think they are separate issues.

I think we generally use self-deprecating humor when we are feeling insecure, and it’s a way of masking our insecurity, whilst also showing it, if you know what I mean. So, you’re insecure about your job, okay? So … and it upsets you. It bothers you. It’s eating away at you, but when you’re in situations with people, you make jokes about your job, your career, what you do, to try and boost yourself into feeling not so bad about it and to make other people … you think you’re making other people think it’s funny how you feel about your job when you really don’t. It’s just another form of lying, and I’ve touched on that before. You’re just … in those situations, you’re lying to yourself. You’re lying to your friends, and that will get to you. There’s no good end game for that kind of thing. None. It’s not going to end well for anybody. It’s always going to start to make you feel bad.

There’s no … if you keep using that kind of humor as a security blanket, as a safety net, as a wall up around what you’re really feeling, it will come crumbling down and you will feel worse. So, I just encourage you in situations, if that is one of your defense mechanisms and you know that you go to that as a go-to safety net. “Oh, I can just crack a joke about that. Everyone will [inaudible 00:07:10]. Everyone will laugh. I’ll feel good about it for two seconds and no one will no the better.” Stop. Just stop.

I don’t think there’s a five step process to stopping it. I like to do steps on how to do things. I don’t think that’s needed at this. I think you just need to notice you’re doing it and why you’re doing it. If it’s a genuinely funny thing, and I mean if comedy’s your job … if your job’s comedy, you’re probably that funny. If it’s not, you’re probably not. So, there’s probably no need for you to be cracking those kind of jokes and putting yourself down. Don’t do it.

If someone else was saying those words to you, would you like them? Ask yourself that. When you’re thinking, “Oh, I’ll make a joke about the size of my nose,” think, if I walked up to you and went, “Oh my God. Check out your honker,” you would think I was a bitch. You really would. You absolutely would because it’s uncalled for, unnecessary, rude, nasty, all kinds of things. So, why the hell are you making a crack about your nose?

Be as the kindest … the person you need to be kindest to in the world … oh, I’m getting on a bit of a Sam’s rant here, aren’t I? Because I know this. I’ve practiced this kind of humor for so long because I thought it was easier for me to make a joke about my insecurities and the things I really saw as flaws in my being or my looks or my life or my job or my money or anything, then have someone possibly know that it was actually an issue. It was much better for me to make a joke about it. God, I should have just gone to therapy earlier.

There’s just no good reason for it, as I said, unless you’re Amy Schumer, because she’s really funny. So, just stop. That’s it. Ask yourself if someone else was saying this to me, how would I feel, and if the answer is not good, then don’t you say it about yourself, okay? Just wipe it from your thing. And if you’re not a comedian, don’t try and be funny. No, I’m joking. See? That’s me being funny. Okay, no. Not being funny? Okay, fine. Fine. But honestly, if it’s not your thing, don’t do it.

Be really careful with humor, because the other thing is, people can take a crack that you’re making that you think is self-deprecating about you, someone else could actually take about, “Oh, shit. Is … oh, maybe she’s including me in that,” and it can affect them that way. So, be really careful with humor. It’s not for the faint-hearted. Oh, get off my Sam’s rant box for the night. Have a great night, and I will see you tomorrow. Friday night, how exciting. Until then, love yourself, love your friends, love your family and I don’t know why I did that, but I felt like it tonight. So, yes. Love yourself. Night night.