So today, I actually want to talk about a question I was asked by a client this morning. And something I’ve asked myself many a time and there have been many books written with topics along the lines of I know what to do, why the hell don’t I do it? We’ve probably asked our parents it as a child, we’ve had doctors say it to us, You’re meant to finish the prescription. I can’t reiterate enough, everybody does this at some point in their lives. You know exactly what you need to do, yet you don’t do it. And then you get grumpy with yourself because you haven’t done it. When the reality is you’re just like every other person on the planet, so don’t give yourself hell about it.

It’s not even necessarily if you’re trying to stop doing something, cause you’re taking something away from your life. This can actually be something you’ve got to add to your life, like you’ve got to add an extra walk or you’ve gotta pay a bill on time. How many people don’t pay bills on time? And we know we’re meant to pay bills on time and then you get the reminder letter and you go, “Oh shit, didn’t pay that. Best I pay that now.” Just pay the bill on time. So what stops us? Okay. So there’s a few things that can stop us. Fear is a big one and fear is one of those all encompassing things that kind of seeps itself into our lives in so many, very many ways and so, so many places.

To name a few fears, we’ve talked about fears before. I won’t go over that again today, but so a couple of them are fear of success, as lame and stupid as that sounds. It’s so, so common. So you fear that what you know you need to do is actually going to make you successful and if you’re successful, then people might think you’re better than them or you might leave some people behind or it might push you outside your comfort zone and then you might need to do something else or it might mean you have to move or look for a new job.

All these things come from a fear of success. You might not be able to handle it, someone might find out you’re actually really hopeless, so you don’t do the thing you need to do, and it can be so paralyzing and so detrimental to your life that you might know you need to get your tax done by October the 31st, which is in two days time if you’re in Australia and you don’t do it. So you’ll get the letter, you’ll get the reminder, you’ll get the bill, etcetera. You know you need to do it and you don’t do it. That one might be fear of the unknown, that one, because you might end up with a debt, but had you looked at everything throughout the year and been on top of things, you’d be more on top of it. 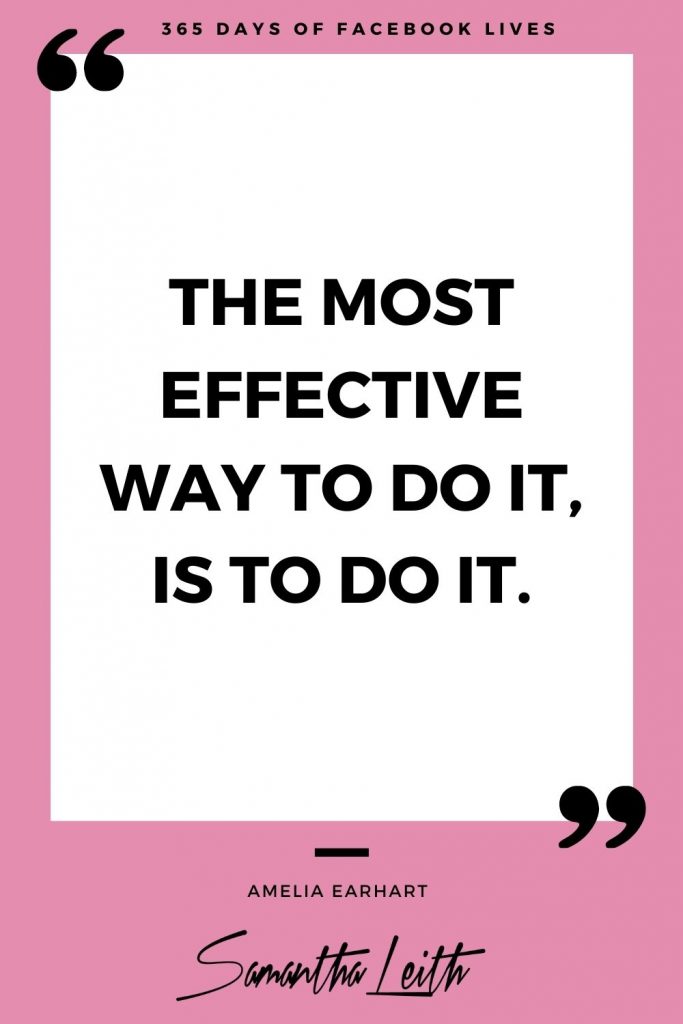 So what are some of the other fears. Fear of failure. So if you know, doing these lives, for example, I had a fear about as you know, being on camera without being in a nice slushy place or full face or frocked up or kazillion reasons.

Now we’re now on day 135 I think it is. Yeah, day 135 I’ve done it with a gammy eye, I’ve done it in the bath. That fear has completely gone. But my fear of failure on do it, putting myself out there more in this kind of regard was totally paralyzing to me. Totally paralyzing. It stopped me doing shit. Just have I created something incredible during this Have I overtaken the world? No. Have I got out of my comfort zone? Yes. Have I got more clients? Yes. Have I had fun? Yes. Do I think I’m providing a service to the people that watch this? Yes. That’s what it’s about. So that fear held me back though for so very, very, very long and a fear of failure can stop you reaching your greatest potential. Can stop you trying even the simplest things. If you think …

If you think a new look is gonna suck, but you really like it so you don’t do it, do first. Just do it the worst that can happen. My good example, my mother used to say to me, you’re only four weeks away from a good haircut. Don’t be scared of things. What is, unless something’s actually going to result in your death or your bankruptcy or prison, they’re probably up there in the top three of things that to be scared off, just do it. Just do it.

Oh my, love you too, Johnny. Thank you.

Discomfort. Discomfort is a feeling that you’re going to have for seconds, minutes maybe, but pushing through that discomfort to do something, mind blowing. Example. Okay. Nah I won’t use that example. Now I’ll do another, I’ll do that example later, save that story for another time. Got my little notes here. Okay. Another reason we don’t do what we know we need to do is habit, habit, habit, habit, habit, habit. So we’re in the habit of going to bed, turning on the TV. Not me cause I don’t have a TV in my bedroom turning on the TV, then that disturbs our sleeping. We know we’re not meant to watch TV a couple of hours before we go to bed. We know the blue light in a room is bad for us. We know that electronic stimulation stops us from sleeping, but we’re in the habit of falling asleep every night to the TV and I’ve got multiple friends that do this and we’re not actually sleeping well.

We know we need to stop it, but we’re in the habit of doing something and to break that habit would go back to the previous reason, we don’t do things we know we need to do. Be uncomfortable to break through that and get to the other side of doing what you need to do, which is unwinding properly and getting a good seven, eight hours sleep a night. Habit is a big one, and I’ve talked about habit before. I’ll probably talk about habit 500 times this year. It’s not that many days. You get the drift, a lots of times.

Another reason, sometimes we don’t do things we know we need to do is our reason isn’t big enough. And perfect example for this is someone that knows smoking is bad for them. Smoking is deadly. Smoking is really fricking expensive. I don’t know how people afford it. Smoking is …

You know you need to give up smoking. It’s socially unacceptable. It’s expensive and it’s unhealthy. Everyone’s told you a million times. If you’re over the age of 45 I have a bit of sympathy for being addicted to cigarettes because we were only just starting to learn how bad it was for you. If you were under the age of 45 and you’re a smoker, what the actual … Anyway, so you don’t give up. You know you should give up. You know you should give up. You walk into the doctor’s one day, he’s doing blood tests on you, a bit of a scan. He says all these levels are a bit dodgy. I can see something in your lungs. We’ve got a little bit of emphysema happening. You give up overnight. Your want, your need, your desire to do the thing you know you need to do has changed instantly and you can action it instantly. It’s amazing. Specially if there’s health ramifications or the financial ramifications like you’re about to lose your house.

I’m like the miracles people can pull out of their ass financially if they’re about to lose our house are incredible. The things that people can do if something’s going to happen to their children or it’s health-related, like a big scare. We can implement change in an instant, even when it’s been something we’ve known we’re meant to be doing it for years. Okay, so don’t beat yourself. I’ll go back to saying, do not beat yourself up about going, I know I meant to do it, but I haven’t done it. I know I’m meant to do it, but I haven’t done it because we all do it. We all guilty as charged.

And the other reason is sometimes you think you need to be doing it. Like it’s something you should definitely be doing, but it’s actually not that guideline, that template, that idea, that rule about something needing to be done is actually based on someone else. So that kind of ties into your why being big enough, but especially be wary of beating yourself up about not doing something you know you need to be doing. If someone else has really told you they need it doing and you’re just taking that on. So be careful about that.

So there my reasons. Failure, success, discomfort. Why isn’t big enough? I think they’re the top ones. So don’t beat yourself up about it. But ask yourself, what are you afraid of? What are you avoiding and why do you need, you’ve been told the reasons you need to get something done. Why do you think you need to get it done? And I promise you, if you can answer those three questions well, you will then be able to sit down and go, okay, well, what is my next step to getting that done? Put it in the diary and get that shit done. Okay. That’s it. Why we don’t do what we know we’re meant to be doing. So until tomorrow, can’t believe two days left of October, where has the year gone. Crazy. Speaking of to do lists, have a great night and I will see you all tomorrow. Hopefully I’ll have makeup on and my eye will better. Bye.