Hey, happy Saturday night. I don’t know if I have… Okay. I think this could be a first, I don’t think I’ve done a live in gym gear. Hmm. So we tick that one off the box. Today I wanted to talk about something I got hit with in the face today. About an acceptance of myself, an understanding, a realization a… What do you call it? A… I’ve lost the ability to speak.

So I’m like, “No, I’m not going to admit it’s true.” But it’s true. So I am the person with the to do lists… And God, I used to coach people in businesses systematization. It’s to do lists and goals and the books I need to read, just look at the shelf. And the targets for this date and this is going to be done here and the schedules and the calendar organization and then this and then this and then that. And all of that can get really, really overwhelming. Like get absolutely get overwhelming. 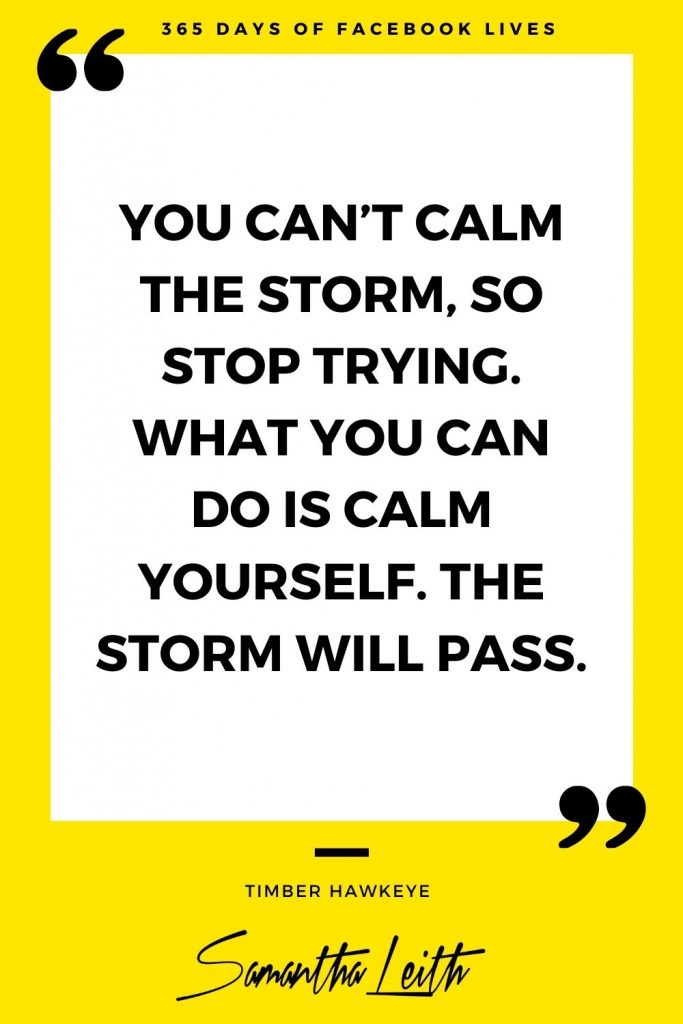 I kind of in one way use it to make myself feel good because I’ve got all this stuff going on. And then on the flip side, use it to kind of paralyze myself… Sorry, in the middle, kind of use it to paralyze myself into inaction because there’s so much going on. And then on the complete flip side, I indulge in using it to make me feel bad because I didn’t get everything I wanted to get done done. So there’s a three… How many fingers am I holding up? Three prong approach.

[inaudible 00:02:42] the ring I was wearing yesterday, oh my God. Three prong approach to what’s going on with that overwhelm. I truly, wasn’t until someone said something to me today and I went, “Oh wow. Yeah, I’m indulging in overwhelm.” And so I was like, what, okay. Accept, you can’t change anything if you don’t accept and acknowledge what’s going on. Always the first step. Whether it’s a feeling, whether it’s an action, whether it’s a financial thing, the first step to changing anything is acknowledging it’s happening.

So I was like, okay. What can I do in this moment to help get myself out of that? Because I was feeling manky about it, like absolutely manky about it today. Especially because it’s been a big week, so the things I wanted to achieve this week haven’t happened. Just plain and simply haven’t happened. So I feel like I’ve let myself down. I’ve let down people that are on my team that are getting stuff done, I let some people I’m doing some assessment work down.

And I actually physically couldn’t have changed my timing to get anything done this week, but I put way too much on my plate, which is that overwhelm, which is like, “Oh well see, I’m so busy. Oh, but I’m so busy so I can’t get anything done. Oh my God, I’ve been so busy. I haven’t been able to get anything done.” So it just goes bang, bang, bang, bang. And it’s so inefficient and so bad for us. So bad for me made, me feel like crap. I don’t want to feel like crap. Bleh, bleh, bleh. I like feeling good. You know that choose happy video? I like that feeling.

So today I was like, okay, what can I do about it? What can I do about it? There is six weeks before Elodie and I go away for a few weeks at Christmas time. There’s eight weeks before the end of the year. In fact there’s 61 days left before the end of 1919. 1919… 2019, gosh, I’ve just lost a hundred years. That’s funny. What can I do so I’m not in this state for the next few weeks? Because I don’t want to be in the state for the next few weeks. Snap out of it, honey. Like Sam get out of that shit out of your head.

So I was like, okay, I need to take some of the stuff off my load. Like take some of that stuff off my plate. So what am I adding to it that’s creating this overwhelm that I’m indulging in and it’s just creating this inaction. So I looked at the goals I’d set for myself at the end of the year. And there were five that I wanted to have done by the end of the year and I’ve reduced that to three. Gone, two. And I don’t feel bad about it. I don’t feel like I’ve failed. I don’t feel like I’ve given up.

Because I’ve recognized in myself that all the stuff I was setting myself to get those five things done by the end of the year, was just having me run around in circles like a chicken with their head chopped off and I wasn’t going to get what I wanted done anyway. So instead of creating like this… You know when you put it an insinkerator on at home in the sink and you push button and it goes [inaudible 00:06:05].

I was starting to feel a bit like that. Like it’s just churning, like going around, around, around, all the stuff’s going to get done [inaudible 00:06:09]. And there’s like the Energizer Bunny and [inaudible 00:06:09]. And it’s just impossible to actually maintain and it’s actually really inefficient because there’s a… Okay hear me here. It’s good to be busy. Busy people actually achieve more than non-busy people.

A lot of busy people achieve a lot more than non-busy people. You give a busy person a task, they’re like bam, bam, bam, get it done. But there’s a difference between being busy efficiently and doing what I feel had really fallen into, was the busyness of being busy, which was creating this overwhelm, which I was being completely indulgent and it was making me go, “Oh well I’ve got too much, I can’t do anything. [inaudible 00:06:58]. see, I’m not going to get that done. [inaudible 00:06:59].

Frees up space for a whole lot of stuff. So maybe more face masks. And that feels good, that feels like the right thing to do. So I just ask you the question, if you were like me and you keep yourself busy and doing lots of things, are you using that? Are you indulging in that? Like is it something you kind of creating yourself to keep you stuck?