Good evening. Happy… I need my glasses on if I’m going to read my notes. Tragic, isn’t it? Getting to that age. I’m going to talk about dealing with this silly season, Christmas. Yes. It’s upon us again. You start the year and you think, “Oh I’ve got 2019. Oh my gosh, there’s 52 weeks. I’m going to get so much done.” And before you know it, the Christmas decorations are out and you’re going, “What the f- happened to my year? Oh my gosh, we’re going to have the Christmas conversation.” And all this stuff happens in Christmas that sends us … Let’s be honest, a little bit Looney Tunes. So I’m talking about things like getting into crazy debt because you want to keep up with the Joneses and wife and want all presents. I’m talking about over-committing and going to … Trying to fit in a gazillion events because you couldn’t possibly let somebody down by not going to their particular event.

Sorry. Volume is on. Didn’t put it on do not disturb. I’m so sorry. There we go. Fixed that. I’m talking about putting on weight. I’m talking about letting the good habits that you might’ve built over the year, disappear just because it’s champagne season, which I think between you and me, I think it’s actually starting earlier every year. So I think Christmas used to start as like the first December, we kind of got into the Christmas spirit and it was lunches and dinners and decorations and all that kind of stuff. And my mother taught me that the decorations have to come down 12 days after Christmas, otherwise it’s bad luck but I reckon these days in Australia in particular, I think the silly season starts the minute Melbourne Cup’s finished. It’s like Melbourne Cup, Christmas. It’s like, let’s just keep the party going.

And then there’s lunches, there’s just so much on. And, I’m not a Grinch. I’m totally not a Grinch. I love Christmas. I’ve got a cupboard in our house that’s just full of Christmas decorations. I have boxes that’s black and white Christmas with the decorations, making the boxes … The boxes are massive. That’s the red and green Christmas. That’s the teal and purple Christmas. That’s the gold and silver Christmas. Yes, I’m that kind of person. So don’t get me wrong. I’m not dissing Christmas at the moment. All I’m saying is we need to do things to protect ourselves and protect our space and protect our sanity and our heart and our cholesterol at this time of the year, because it all goes pear-shaped at Christmas. So if you’re single, Christmas has his own set of hiccups because other people are going, “Oh, I had Christmas with my love. For me, it’s such a nice time. Oh, we held hands and walked in the park.”

If you’re like I was for years with elderly parents, you kind of do what they want to do because they’re not going to be here for much longer and you get according to those traditions. If you have children, especially young children, it brings up another whole set of beliefs and ideas and things about what Christmas means to you. At the end of the day, if you’ve fallen hook, line, and sinker for all of that bullshit and not spent Christmas the way you want to spend Christmas, your fault. Yes, that’s me. My fault. Okay? We actually get to choose what Christmas means to us. Okay? We do. We don’t have to do what other people want us to do. We don’t have to … If you don’t want to drive eight hours to go and see Great Aunt Nancy because that’s the tradition on Christmas day and you want to have an orphan’s Christmas at your house, serving nothing but seafood for all the people you’ve met over the last couple of years that don’t have family, then do that. Honestly, do it. 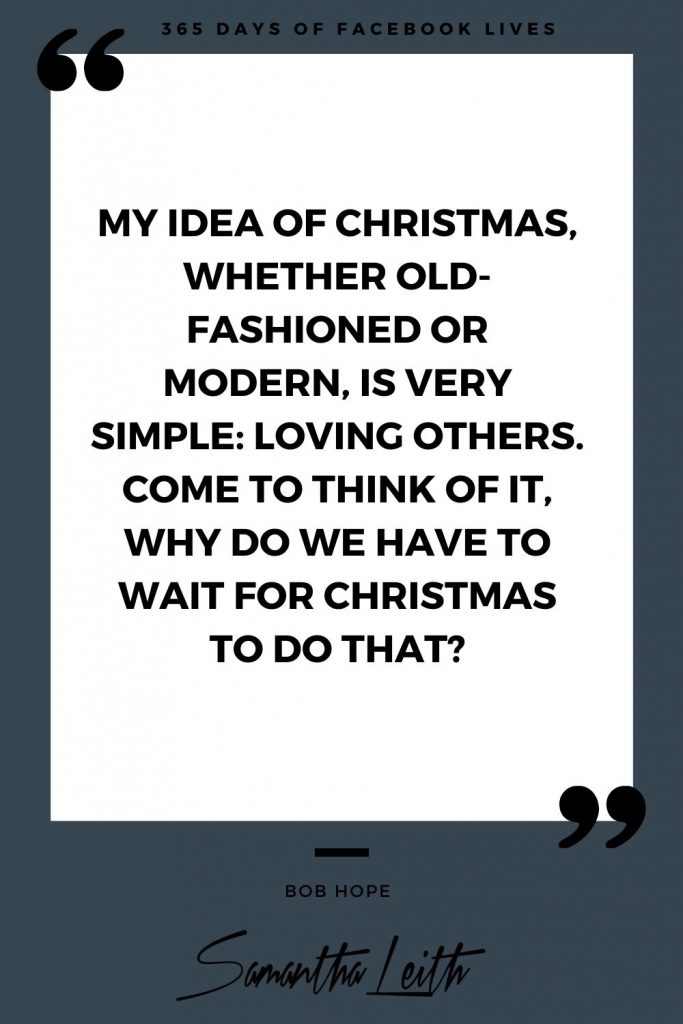 Christmas is about being with people you love, being with people you care about. It’s about giving back to those less fortunate than you and for so many people. And it’s about having a break in Sydney and the traffic not being shit. Shh. That’s one of my favorite parts of Christmas in Sydney. So it’s okay to, all I want to … Plans have started. Plans have started being made by people ages ago and the conversations have started and I found myself going, “Yeah. I can come to that. Oh, I’d love to come to your dinner. Oh, you’ve got that on? Yeah, I’d love to come!” Because I want to kind of feel included. You know what? I don’t want to go to it all. It’s the end of the year. There’s much work to get done before I … [Ellody 00:05:01] and I are going away at Christmas.

But apart from that, I like having eight hours sleep a night and running around like a chunk of my head chopped off trying to get to everyone’s events because I think then, that’ll make me feel better because I’ve gone to everything, will just make me feel worse. So I’m taking time to go, “You know what? That actually doesn’t fit in with me this week. Thank you so much for the invitation. Unfortunately, I’m unable to attend.” Now when you’re doing things like this, this is a problem us people-pleasers have, is we lie. We do. We lie. We say, “Oh, no. I can’t come, cause Auntie Mame’s in from town and I’ve got to go see her.” It’s bullshit. We just don’t want to go. So don’t lie. And I actually, I don’t lie anymore. If any of my friends are watching, I don’t lie anymore. If I can’t come I can’t come. And I’m genuinely honest about why I can’t go to things or having over committed myself or something like that because it doesn’t do us any good.

Okay? Just doesn’t. Now, if you are doing the party scene thing and you’re going around and you’ve got your candy cane out, you’re doing the dance. Eat before you go out. Otherwise that fifth champagne is going to send you over the hill and you’ll be like, and before you know it, you’ll be flirting with old uncle what’s-his-face. And you wake up in the morning going, “Oh my god, did I really do that?” And you don’t want to do stuff like that. Says someone who has been there done that. Okay. When it comes to present buying, don’t be ridonkulous. If someone else can spend $500 on a present, doesn’t mean you have to match them. Okay? It’s not my- is as big as your- insert abbreviated swear word that you’d like there, like it really isn’t. It’s not a dick-measuring competition. Buy people… If you want to buy people presents, cause you don’t have to buy presents. You can make presents or you can do nothing or you can give a card. Do what you want to do, not what you think is expected of you.

One of the greatest Christmases we ever had, for years ago now, [Ellody 00:07:13] decided she wanted to buy all of the presents for people. She wants to give presents to everybody herself. So, I don’t know if you know, there’s a shop called Daysu, Dayso… I’m not sure how you say it in Australia and it’s a Japanese brand and everything in the shop was $2.80. So [Ellody 00:07:29] wrote a list, and I think there were like 23, 28… under 30, but more than 20 people on this list that she wanted to buy presents for. So I said, well fine, you do the list. I think she might have been six or seven. Seven she was.

There’s all sorts of things that can set us off. If you’re above the age of 18, you are going to know what sets you off. Like you’re going to have figured that crap out by now. So I encourage you to put a little boundary around your life in that particular area. If you know, waking up on Christmas morning makes you really sad, make sure you don’t wake up on Christmas morning alone. You know, have a friend come and stay the night. Christmas morning’s one of the most important things to me. So, we have a rule. [Ellody 00:09:13] gets to spend Christmas Eve with me. I want to wake up with her. Then she goes to her father’s later in the day. That’s important to me, but not as important to him in the morning. He doesn’t like waking up early.

But those little things that you can do can make all the difference to your day. I always have champagne. Actually I didn’t last year cause I wasn’t drinking. Scrambled eggs and smoked salmon. It’s Christmas morning to me. But also, when you’re getting to a certain age and your parents maybe are no longer with you, it’s the opportunity for you to actually decide what your Christmas traditions are going to be, what is meaningful to you? What is important to you where you want to be, who you want to be spending Christmas with. So this year [Ellody 00:09:56] and are off to Europe. White Christmas, I can’t wait to be doing that and experiencing those things with her. That’s my new version of Christmas, letting go of mom and dad and all the stuff that I’ve done in the past.

And you know, next year I might still… Well, I might be with my family here, but for this year we’re gone, and the other things… So we’ll go back through the list of what you got to make sure you do. So, protect your time. Okay? Do not over commit to things. Be honest with people about why you can or can’t go to something. Protect your insides and eat food before you go out drinking bagels. Really important, your mother was right on that one. Spend Christmas day, at least a portion of it, cause I’m not going to tell you, just change everything overnight and you not feel guilty about Auntie Joan, but spend at least a portion of Christmas day, doing something that’s really, really important to you, meaningful to you will light up your heart and make you sing, okay? That’s really important. Don’t get into a ridiculous amount of debt buying presents for people that aren’t going to remember what you bought them six months ago, six months in the future, rather. That’s crazy. It’s not a competition, okay?

And look after your health. They’re my big things. Take it easy on Christmas. And from this moment on, yes, the countdown time is going to be on. Yes, I am going to be playing Elf radio because I like Elf radio and I cannot hear, “I don’t want a lot for Christmas, there is just one thing I need” too much, okay? I really can’t. And I’m going to sing “Baby, it’s Cold Outside,” even though we know those words may be a little inappropriate to some people. But that to me, Christmas is all about that stuff. So, spend the next five weeks… oh my God… having the Christmas season that you want to have. Protect your boundaries, your health, your sanity, your love, and your family and your wallet. And don’t buy into the bullshit. Okay? Just don’t. Merry Chris… well, I’ll see you before Christmas, I’ll see you tomorrow night. But yeah, Christmas came up a lot today for me. So wanted to give you my key tips on how to deal with the crazy season. Bye.