[365 Days of Extraordinary] Day 159 Transcript: You Have To Have Something Sensible To Fall Back On…..mmmm NO!

So, here we go, a Facebook Live, a walking Facebook Live. So, apologies for the jimble jamble, the wibble wobble, is that a technical term? I’m on my way to see my daughter at Schools Spectacular tonight and she’s in the drama part of it. And I’m so encouraging of her doing any of this kind of stuff. Now, I don’t know what she’s going to go on and do in her life. I don’t know. She had a few things she’s been interested in, human rights lawyer, actor, singer. Very into activism. So, what I’m thinking about as I’m walking out there tonight is I started singing at a really young age and I think I did my first solo at seven, six or seven, six I think it was. And then I used to get paid 50 cents for singing at weddings and a dollar for singing at funerals when I was seven, eight, nine. 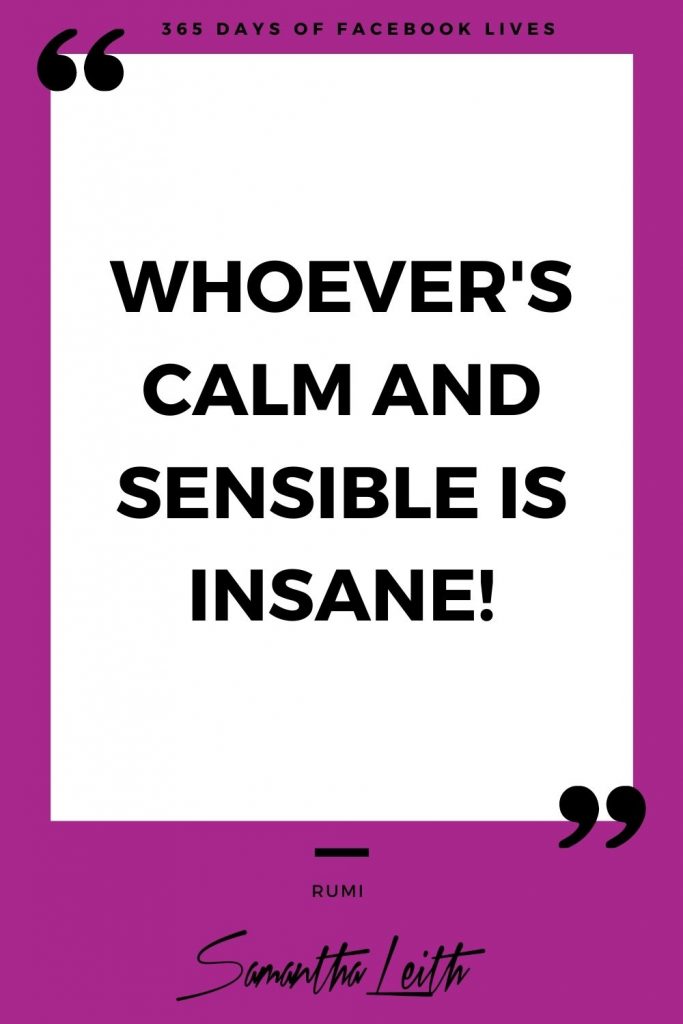 And I don’t regret it because I freaking love my life, but I wonder what would have happened with my life had I not had people telling me all those negative things about what I wanted to do with my life. So, I encourage you not to look back and go, “If I’d only done this.” Because if you can’t love where you are now, we’ve got other issues we need to talk about. But what I encourage you to do is question what it was that possibly got said to you, or an action that you saw, or some belief that happened to you when you were younger that maybe made you not go in the direction of your dreams, because I promise you, hand on my heart, solemnly swear, I don’t know what I’m doing, pinky promise, pinky promise, my daughter will never ever hear me say the words, “You have to have something sensible to fall back on.”

Whether she wants to be a garbage collector, go to the moon, create some incredible DNA chemical something, wonderland, or join My Chemical Romance. It doesn’t matter. I just want her to be happy and follow her dreams because I do believe that if you follow your dreams, even if you don’t make incredible amounts of money, that’s not what it’s all about. You might be incredibly bloody happy and that’s a really, really good thing. So, to all those kids tonight doing Schools Spectacular, good on them. Oh my God, I hope I get to see some of them do incredible things in life. I was in Schools Spectacular a gazillion years ago, I’m not that old, that’s what you’re meant to say, when it was a tiny production, relatively tiny production at Darling Harbor.

And now, I think there’s like 5,000 kids in it tonight. It’s massive. And good on Mary Lopez who’s got the ball rolling, would just be so proud of this thing that she created. And if someone had ever said to her, “You better have something sensible to fall back on.” This wouldn’t have happened. You think about the marvels in the world, going to the moon, which I just mentioned. Imagine if Beyonce’s father had, instead of getting her to practice singing while she was running on a treadmill, had said to her, “Oh, you’ve got a good set of pipes, but you better have something sensible to fall back on.” Where would we be without Queen Bey?

So, if you’re a parent as well, watch your languaging around this kind of stuff because even if they’re not … Even if your kids aren’t actively doing what you’re saying at that particular point, it does sink in, trust me, believe me. It does sink in. So, be really careful with that stuff. And I encourage you this weekend, go do something not freaking sensible. Okay? Go do something fun. Go enjoy, go bring out that youthful passion that you had about something. Go and do something on that, that’s what I want you to do this weekend. So, until tomorrow, mwah, adios. Bye.