[365 Days of Extraordinary] Day 160 Transcript: I Could Scream Mr Bumble

Hello. Happy Saturday night. I hope you’re going to go and do something extravagantly fun tonight. I’m off to my sister’s for dinner, which will be lovely. Now I wanted to talk today about frustration and getting upset, and that over the top, where you just want to like be a child and throw yourself on the floor and go… Which reminded me of the musical Oliver, where I once played Mrs. Bumble. And we had this thing. I could scream Mr. Bumble, I could scream. And today, I really felt like screaming. Things were not going my way. Technology was killing me. It was like everybody in the universe was just going, “Nah, no Sam. You can’t get this done today. No. Not your day to do this stuff. You should go do something else.” And I wasn’t having any of it. So, I had to breathe. Lots of breathing, lots of breathing. And I know we always breathe. It’s not like you stop breathing. You get stressed and suddenly start breathing. But when you’re at that level, where you literally want to have the tears streaming down your face, you want to punch someone or you want to scream, deep breathing, just in and out, helps so much. 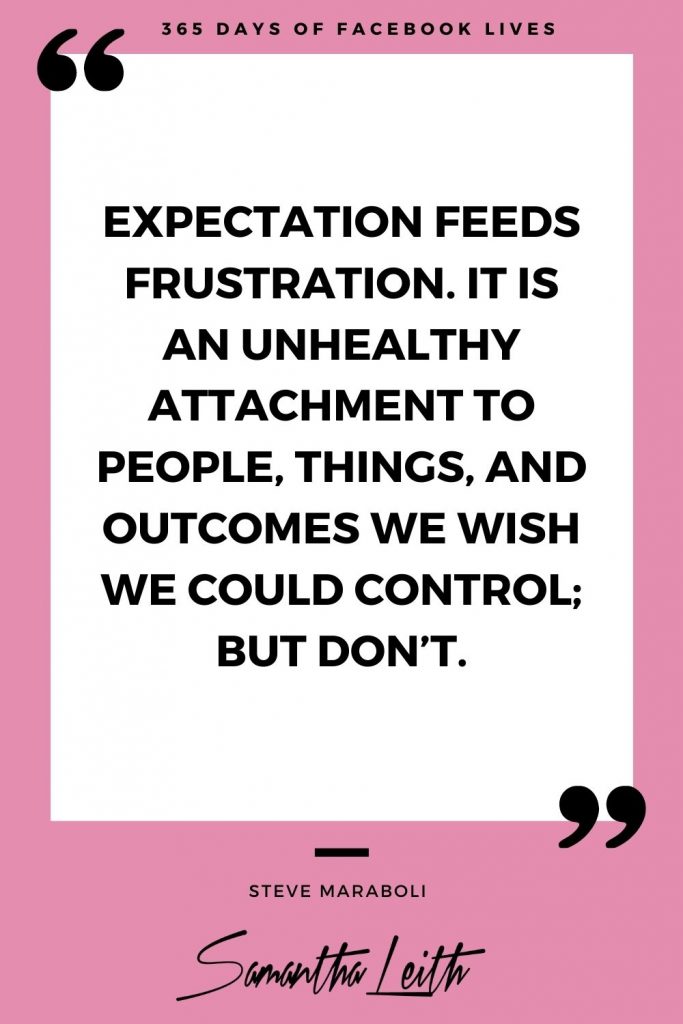 And you know what I learnt from all these dramas today, is that my vent up rustration and anger was… It wasn’t about the technology. It wasn’t about what was going wrong. What it was actually about, I was externalizing all this internal frustration, because I hadn’t got what I needed to get done, in the right time with enough prep to be all organized, and to be able to go, “It’s all done. I can take a chill pill now.” Because there’s this universal law that you will get what you need to get done, done, whatever time you allotted. And I have unfortunately been a master in my life of, “Let’s leave it until the last minute, shall we? And then let’s work on that very fast deadline.” And it’s not very good for you. It’s not very good for you. A lot of the time I get away with it.

A lot of the time, it doesn’t impact me too greatly. Today, it really impacted me. So, I was standing on stage at this gig, and… Before the gig was happening. And I was literally made up. Literally just like bouncing up and down and pressing in here, so I didn’t cry. And looking up, because there’s old wives’ tale… I actually don’t know if it’s true or not. That if you look up, you can’t cry. And if I’d been prepared, none of that would have mattered. It wouldn’t have mattered that this wasn’t working, and that wasn’t working, this wasn’t working, that wasn’t working, I would have just dealt with it. And when you’re a season… When you’re a professional performer, speaker, singer, dancer, actor, any… Politician, any those… Leader. Any of those things that involve you having to step up and be on. The bit of prepped you are, the easier that all flows.

The easier it is to deal with any bumps in the road. So, it’s just a short live tonight, because I just wanted to reiterate to myself and to you guys, that preparation is the key to everything. And when you prepared… And I’m… By that, I mean, you leave early enough to not get stressed out if there’s bad traffic. You eat well enough to not feel bad if you have a piece of cake. You prep early enough for a meeting, so that it doesn’t matter if the project is not working. You know what I’m… You get your washing done before you run out of nickers. Seriously, it can be that simple. And when we do those things, we don’t get to that moment where it’s like, “I could scream Mr. Bumble.” And you know, we don’t want to be there.

It’s not a healthy place to be. My cortisol levels are shooting through the roof, and the poor people I was with, were like, “Let’s calm Sam down. Let’s take a chill pill.” And to be honest, they really didn’t know how stressed I was. I’m pretty good at covering that. But internally, Oh my God. Punch a wall, scream, cry, have a tantrum on a supermarket floor. That was where my head was going. And I got over it. I dealt with it. Breathing and realizing that the worst thing that was going to happen, was this was going to take a little bit longer than anticipated, and it wasn’t going to be as good as I really wanted it to be. But whose fault was that? Mine? So, accept responsibility, see what I can change next time, and move on over that bridge. From the past, which is what’s happened, to the future, which is where everything we do, is getting us to. That’s it. Breathe, let it go, and move on. Happy Saturday night. Have a great night. And I will see you all tomorrow.