It’s Monday night. Why am I doing that dicky dance? No idea, really. I want to talk about tonight being present. Because I had an astounding experience on the weekend.

I went to a dinner party, which there’s nothing outstanding about that except yeah, the food was good. Company was great, et cetera. What was astounding and outstanding is that we were all completely present. There were one, two, three, eight of us. Yes, eight of us so I don’t have to count ankles.

And at no point during the evening did any one of those eight of us picked up our phones, ironic given I’m filming on it, to do something that took us away from the moment. And I can honestly say, I don’t know, the last time that happened from standing in a queue at a coffee shop, to being at a seminar, to waiting for the lift, going up escalators, everywhere, anywhere you go, we’ll just pretend this is a phone, shall we? people just looking down and doing stuff like that, and you think you’re doing some exciting by posting a photo of where you are or interacting with someone saying “Oh, guess what songs I just heard”, it’s still taking you away from the moment.

And when I left the dinner party, we had a chat and it was extraordinary that at no point any of us were completely present in the conversation, the food, just being there. It really was mad, like so good, so good. So since Saturday night I’ve been trying to challenge myself because I like a good challenge to not pick up my phone as a default. 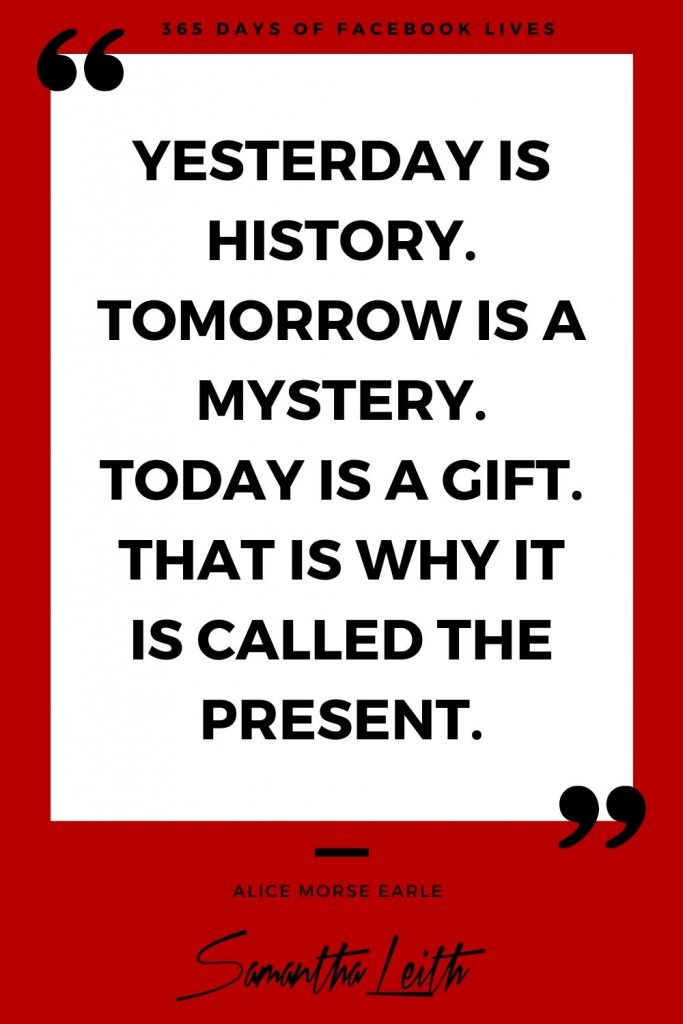 I’m pretty good. I schedule a lot of stuff and I set myself reminders and alerts and I only allow myself snippets of time, especially on social media. But I’m not, by any stretch of imagination, addicted to it. See previous Facebook lives about [inaudible 00:02:31] little addictions, but it has become a default to most of us in a moment of discomfort or a moment of boredom, a moment of waiting, a moment where you kind of don’t want to be engaged with who you’re possibly talking to or where you are, or it’s a default that “Hang on, I’ve got to let everyone know what I’m doing at this at this moment”. And you may look at my Facebook feed and my Instagram feed or something like that, and think I post a lot and for some people I may do, but I don’t post nearly as much as I used to.

I’m a lot more decisive, especially about the personal stuff I post, some using this business page a lot more, especially now Elliot has gotten older and she gets a say in, she doesn’t want her life all over social media. So I’m not like: “Ooh, look at my cute daughter” all the time. That’s now her journey to get to do not mine.

And I’m not that interesting, you don’t want to see me all the time. So why am I bringing this to your attention? Because I ask you, when was the last time you were at something and nobody was on a phone, they didn’t take a phone call, they didn’t do text message, didn’t take Messenger, they didn’t post a photo on Instagram, they weren’t swiping their Bumble app. Like nada, I’ve been at funerals where people are on their phones and it’s not just something that’s for airports and cafes.

You drive down the street and you can see people sitting in cafes all outside and Elliot has commented on it many times, you look over and there’s two people sitting there on their phones, not interacting with each other.

Why am I doing it? Is there a reason for me picking this up? Or is it just some would say buffering or a procrastination tool, It’s like an alienation tool a lot of the time and just watch yourself and try not to do it.

No, don’t try not to do it. Don’t do it. And if you add a dinner party, put it on silent, okay? The world won’t go to pieces without you checking your phone every five minutes. Was such a pleasure to be in the company of people that were completely present. So go and do that people, especially coming up to the silly season, the best gift you can give anybody you care about is your presence, not a present.

So whatever you’re doing the Christmas season, if you’re at a party, if you’ve got people at your place sitting under the tree, you don’t need to be taking your phone out every two minutes. Because A: it’s teaching our kids really bad habits, but B: it’s pulling you away from the moment, pulling you out of that present state, and you know what? Really, sometimes it just makes you a douchebag doing that kind of stuff. So put the phone away and be present. That’s my wish for all of you this silly season. Night, night.