[365 Days of Extraordinary] Day 164 Transcript: Still In The Dark

Dancing in the dark. Oh, that’s not how the song goes.

Yes, we are still in the dark. Candlelight. Yeah. Fridge buggered. That’s really quite eerie. Ooh. At this stage they think we may have power on Friday. First world problems. I know that I have to throw out a whole lot of food and stuff out of the fridge and freezer, but the impact it’s had on, man, everything you do. It’s just… You really, really don’t realize.

So I’m really sorry, but tonight’s live’s not going to be great either because I’m going to… [Elody 00:00:41] can have an avocado sandwich for lunch tomorrow. Because she normally takes leftovers like risotto or whatever we’ve had for dinner the night before, she takes. And we can’t do that at the moment because we can’t heat it up. It is seriously bizarre, driving into suburbs where there is not a light, not a sound, not a light.

I thankfully tonight have a little bit of 4g on my phone, so I can do the live, but I don’t know how long it’ll last because I tried to send an email before and that wouldn’t work. So not sure. 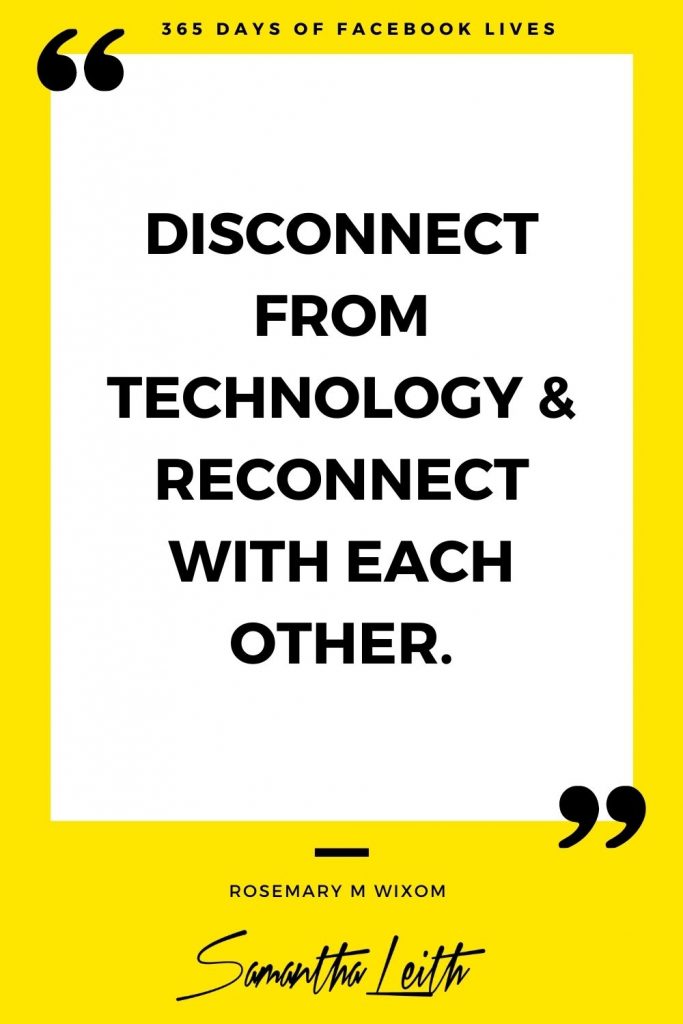 But going back to my live from the other day, where I talked about the power of presence and how I’d been at this dinner party where no one had used their phones and we were all just connected and talking and enjoying each other’s company.

And I think it’s bizarre that now for two days, two nights now, we’ve had no power. So there’s no TV. There’s no Netflix. We’ve got to save power, so we’re not Facebooking and Instagramming and catching up with people on FaceTime or doing any of that. Elody and I are playing with the dog, cuddling the cat, playing Uno. Last night we sat and played cards by candle light. We’ll probably do a bit more with torches tonight. And chatted and connected.

Now I don’t think I’m an over consumer of technology at home. We have no devices in the bedroom. And when we have dinner together, we’re not sitting there on phones or anything like that. Sometimes we watch TV together, but it’s not every night, but not having the ability to do it, creates an amazing connection. I don’t all want you to lose power and not be able to make a coffee in the morning. Because I really found that hard this morning. My alarm went off at 4:45 as it does. And the fact that I couldn’t go and put an espresso on was. And I don’t have any instant coffee in the house. So I couldn’t boil a saucepan on the stove and make an instant coffee. So it’s like, “Oh I need coffee, I need coffee.” Yes, some might be addicted. No, I don’t think I’m addicted to coffee. Because when I go away, I actually don’t usually drink coffee.

But this can… All I’m trying to say is not the planned lives I had for this week at all. But even if you fake it, get connected with your family and your loved ones and or the people you live with or yourself. Get connected with yourself by turning off everything. No phone on. No laptop on. No Netflix, no Stan, no ABC I view, no Catch Up, no anything. Turn off Facebook and just be. Try it. Really. I just encourage you to try it. Elody? Elody?

What are you doing at the moment?

Do you want to come and say something on the live?

Let’s see what the 14 year old’s opinion of being life in the dark is. How are you finding this couple of days?

Yeah, it’s fun. It’s annoying though, because the food’s gone off.

We’ve had to have cold showers.

Yeah. I’m having a shower at school tomorrow morning.

Which will be nice and warm.

Yep. My showers have doors on them. Yeah.

And have we been closer and more connected?

Yeah, it was fun.

It feels like we’ve forged a new connection. It’s like we’ve just been home, not every single day, but.

Oh okay. But it is… just do it. If you’ve got children fake an electrical something at home-

…and turn stuff off for a while and just get to spend time with them. Okay. She just said that was really mean. Maybe that’s too extreme, but just enjoy your own company. I did a live before about the power of just being in terms of walk the dog, don’t walk the dog and listen to a podcast. If you’re swimming, just swim. Don’t have those waterproof headphones on. If you’re at the gym, just be at the gym, don’t be watching your workout on a fire while you’re listening to something, doing what you’re doing, just being present. And this is really making us be present. And I believed it before, I did it before a bit, now I really get it. It’s not bad. So hopefully we’ll have power on tomorrow, because I’ve got a lot of work to do that I can’t get done at the moment.

Yeah. Funny I’m a bit late with my Telstra bill at the moment. And they rang me today to say “You’ve got to pay your Telstra bill in the next couple of days, because it’s overdue. Or there’ll be service disruptions.” Automated phone call obviously, as they all are. And they happen these days if you’re two days late with the bill, and was $200. The irony is I’ve got no phone service. We’ll disrupt your already non-existent phone service. So I did think that was quite funny.

So good night, hopefully we will return to normal services tomorrow, because I’ve got all this content I want to share with you at the moment that it’s just too hard to do when I can’t look at what I’m doing. So have a great night, stay safe. Thankfully, no one got hurt in all this drama on the North shore of Sydney. She’s lighting all the candles. And I will see you tomorrow. Good night.