Hi. We still don’t have any power. We’ve been told to expect it to last, Sunday, Monday, Tuesday, which will be a week, and I have gotten today to the delusional part. Sensible Sam, probably would have actually done my live today while I was out and about in my office with wifi, stuff like that, but I didn’t. I wanted to do it when I got home and yeah, nothing’s improved, but I really am not whinging about it, I promise, because Elodie and I’ve done some fabulous fun stuff together. No one’s been injured, apart from Elodie’s father, but he didn’t get injured in the [inaudible 00:00:46]. He got injured afterwards. We’re all just getting grumpy and delusional because life’s just not how we normally know it, which is just ridiculous. We are so blessed. We are so blessed and to be in a state where you don’t have power, it’s nothing, really. I’ve got my little ring light on my phone. I haven’t thought of that before. It’s battery, USB operated. Sometimes, I can be smart.

One of the things I wanted to talk about this week, I’m not going to do my teachy stuff because I really do need to be at my laptop and have my notes and things like that, so I won’t do that. Pretty handsy tonight, aren’t I? But what I want to talk tonight is about willpower. Now I was having a conversation with a friend of mine. I’m just in my pantry at the moment. We had Aldi Christmas biscuits got them for a party next week. They’re fabulous, beside the point. I was talking to a friend the other day about willpower. Now my mother, may she rest in peace, actually, I don’t think she’ll be resting, I think she’ll be having champagne at a party up there with someone, used to say to me, “I’ve got lots of willpower, it’s won’t power I don’t have.” And I haven’t said it for ages, and I said it to a friend of mine the other day, and she was like, “Oh my God, that’s so funny.” I was like, “But it’s so true.” 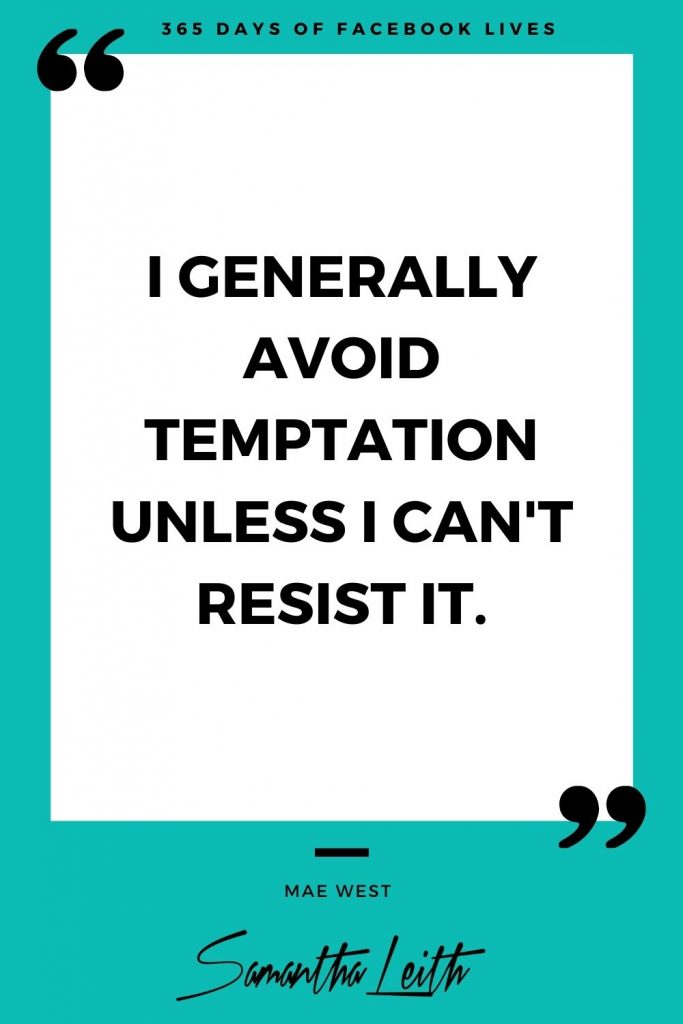 We go through life and we say, you need more willpower. You need more willpower. You must have strength and get willpower. And I’m here to tell you that willpower is not most people’s problems. When asked with the question, do I have the mini packet of M&M’s, most people go, sure, I will, not sure, I won’t. It’s won’t power that we have the problem with, I have a problem with. Unless you’re really, really, really committed to something, as I’ve talked about before, in goal setting and habit setting, when you really focused and committed and driven on something, the question of will I or won’t I doesn’t come up. It’s just easy. And yes, these are from Halloween. A side note, don’t you love how at Halloween, a lot of people give you chocolates and things that are either just nearly past the used by date or just over the used by date or maybe it’s just our neighborhood. I dropped them.

But if you’re a little bit swayed and not a hundred percent committed to get up and go to the gym or finish that report or do anything, the slightest distraction and yeah, your won’t power has gone out the window and you’re like, “Yeah sure, I’ll go do that. Will I? Absolutely, I’d love to.” I know I like plays on words, so that’s probably why we’ve talked about this, but willpower is… I’ve read a couple of books on willpower, and people’s opinions on what develops willpower can be quite contradictory. But to me, my understanding in how willpower, in the traditional sense of willpower, not my jokes of it, feels is it’s a real grit your teeth. “I am going to get up and go to the gym.” And that is the most unattractive face, Samantha. You really grin and bear it, that saying, you grit your teeth and just get in there. I’m not going to eat the chocolate. I’m not going to eat the chocolate. And at any point, that is just going to tumble, completely tumble because it’s coming from the wrong place, totally coming from the wrong place.

When you’re in a place, give you example, every so often, when I give up alcohol, as you know I do, part of it is a grit your teeth, just got to prove I’m not an alcoholic like my father was, but when I’m actually doing it, I don’t have to grit my teeth. To me, that’s a weird one. I can go to weddings. I can go to parties, whatever, social gatherings, I can come home, there can be an open bottle of wine, and I’m not even vaguely, vaguely tempted because I’m in that head space, and I’m not gritting my teeth about it. It’s just what I’m doing. I go into it, I’ve got to do it as a privy thing, but when I get into it, it’s not at all, I just do it.

However, when it comes to things at the moment, I’ve got to say, your head space, when you’re juggling with the will I, won’t I power thing, when something else has going on in your life makes it really, really, really tricky. Today, I completely feel like I have become delusional. It’s like, something’s going to go wrong, something’s going to go wrong. It’s hilarious, really. And so I’m looking at this little packet at M&Ms going, every single one of them look really tasty, and I don’t really want to eat them, so it’s a bit of grit my [inaudible 00:05:55], grit my teeth. I’m not to eat them, but then I’m also like, yeah, whatever. It’s only a mini pack, there’s probably only five M&Ms in them. What the hell, who cares? But then you do that, and it’s a slippery slidey slope. And any of that won’t power that I’ve established on not eating the M&Ms goes out the window. So then tomorrow is, I’ll have that or I’ll have that or I’ll have that.

My point in this whole thing is, when you are struggling with the will I do something, won’t I do something, bottom line is, if you’re going into it with a, I have to do it mentality, and it really is that grit your teeth, F this, I’ve got it. At some point, you’re going to fail. At some point, you are going to fall over because that’s coming from the wrong, dear I sound woo woo, it’s coming from the wrong kind of energy. But if you’re coming into something with more flow of going, no, I don’t want to, not interested, then that kind of willpower is really, really easy to maintain. I promise you.

If your mind is going into battle on the will I, won’t I, drop it, because you’re not going to win, and it’s just going to cause you anxiety, stress, tension, confusion, absolute trouble and decision fatigue because of those constant conversations. So let it go. Honestly, let it go. Try again tomorrow. That’s my advice to you tonight.

I will do my live tomorrow during daylight hours, so we’re not having these weird [inaudible 00:08:36] conversations, and until then stay safe people, and call someone and tell them you love them. Yeah, do that. Would you do that for me? And actually, let me know you love me by going to www.samanthaleith, and you can see the spelling on the Facebook page, .com, and sign up for my seven day confidence challenge. It’s fun and it’s fabulous or just put down your details and get on the email list, so you can get a weekly dose of sparkle in your inbox. Okay, night, night, muah.