So here we are, night four, and I’ve actually remembered to do my live in daylight hours. So I’m at a friend’s place this evening because she texted me and went, “Want Indian takeaway? Hubby’s paying.” I’m like, “Yes, make sure you order cheese naan. Cheese and garlic naan with extra garlic.” Tonight’s live, I’m so off the track of what my topics were this week, because this week has been all-encompassing. I swear, all-encompassing. And I want to talk about community because I live in a small neck of the woods in Sydney. We’re about 12 kilometers out of the CBD, but we’re one of those peninsula-y kind of suburbs where you don’t drive through it, you have to turn to go into where we live. You have to kind of want to go there to go there, if you know what I mean.

And we have national parks across the road, we have creeks, we have … You’ve seen my posts. I’ve had snakes in my lounge room and bush turkeys in my dining room and kookaburras in my bedroom; it can be madness sometimes. But what this week especially has shown to me is the power of community. So there’s, I think, approximately about 10,000 people still without power in our kind of few suburbs, but in our little pocket, as eerie as it is when you drive around, and it’s dark, dark, dark, darker, then all of a sudden you see a little bit of light. So it’s either someone with solar generated lights, or they’ve got a generator, which my friend has running at the moment, which is really noisy and stinky, or it’s someone who’s lucky enough to be able to have had power reconnected.

And there’s a Facebook group that’s formed with people within our community, and the sharing and the love has been incredible. So people I don’t know are saying, “Please come and do your washing.” People I don’t know are saying, “Oh, I heard you can’t wash your dishes, do you need help?” People I’ve never met are saying, “Is there anything I can do for you because I’ve got power. Do you need me to charge something?” It’s, why can’t we live in a world where we do that all the time? Why does it have to be a … something like this happen? Like why, really? It’s taken us all wandering around in the dark with torches and candles and going, “Do I throw my meat out today or do I throw my meat out tomorrow?” for us to join together. 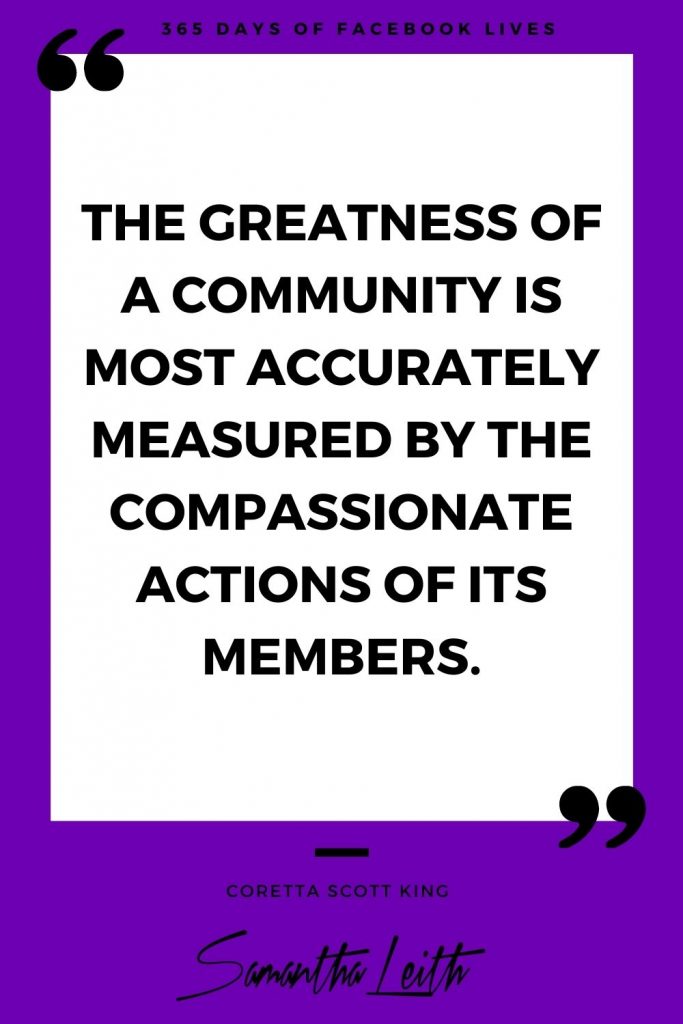 Now don’t get me wrong. We actually have a good community anyway, in my group of friends. But I thought my group of friends was the community that I was part of, and it’s so much bigger than that. So much bigger than that. There’s little old ladies and old gentlemen that live by themselves, and people are knocking on their doors and checking they’re okay. People are doing their grocery shopping for them. People are making sure they can get their washing done. People are bringing them meals. People are helping them. We’ve had this refuse and the SES, God bless their cotton socks, do an incredible job. And I have some friends that have teenage sons that volunteer for the SES and man, they do their parents proud. They do such an incredible job.

But it’s their job to fix the stuff that is dangerous or dangerous to you or dangerous to the community. It’s not their job to come and pick up the tree that’s fallen in your backyard that hasn’t actually hurt anybody, hasn’t broken a roof, hasn’t broken a fence, isn’t on an electrical wire. That’s your job; you’ve got to take care of that stuff. And that stuff’s hard to do. So some of the guys in the neighborhood, and some of the women, are going around and helping people do it. They don’t know these people, but they’re going round to help do it. So my question to everyone is why does it take this to make us be more community-minded? Like really, what prevents me from going and seeing someone I don’t know, at another time of the year or during the week or whatever, or dropping off some food to someone or doing something else within our community, at any other time of the year? Why don’t we have that?

Is it because of these things, this device I’m on? Is it because we’re so far removed from the reality of that one-to-one connection with people that it doesn’t occur to us to go and check that, “Oh, you know Joe, his wife died a while ago. I might just go check he’s, okay.” We don’t do it. And it’s actually made me really sad. What was fascinating is this morning, Elodie and I were talking, because we stopped to get her some lunch to take to school and I really needed a coffee. And as we’re walking back to the car, she said, “You know, Mum, I’ve really enjoyed this few days with you.” I was like, “Why?” And she said, “We’re just really connecting. Like we’re talking more.” And I said, “Yeah, like we’re talking more at home where there’s no TV, we’re not on computers, et cetera.”

I said, “But even in the car because of everything that’s going on, we’re having these extended conversations when we’re walking or when we’re in the car, because we’re not on these things.” I just … It’s fascinating to me that all this has happened the week after I talked about that dinner party, where no one was on their phones and we were communicating. And since then, everything has led me to this life where there’s less and less and less and less technology. Is it the technology that connects us that has made us such a worse community? Is that it? Like, in this day and age where we have … take Mardi Gras for example. I remember in my 17, 18 … sorry I was over age, I was obviously over 18 … this incredible sense of community where we would get together and we would form these events and we would help each other. And the splendor with which we did everything was incredible. There was this love and this zest and this vibrancy.

And now we post in Facebook groups, reminders of that vibrancy rather than still creating that vibrancy. We go, “Oh, remember when we used to do this?” Well, why don’t we still do it now? Why don’t we have those picnics in the park? Why don’t we have those nights out? Why don’t we put these things away and actually have conversations with people? I don’t know. I truly don’t know the answer, but I know this week has really made me question use of technology. I haven’t missed it. I’ve read my Kindle at night. Thankfully that’s had enough charge to go through. Two pages and I’m like falling asleep anyway. But apart from that, no tech. And I do my live, but that’s the only technology I’m using at home at all at the moment. And I haven’t missed it. I really haven’t.

Can we go back to analog days and like typewriters and liquid paper and stuff? Maybe we’d be happier. Maybe we wouldn’t have this bombardment of egomaniacs and narcissism and the shite that’s going on in the world where it’s all about the focus on this, which is again ironic because I’m on this. I like to think I’m sharing things that are valuable to people and I’m not doing it from a narcissistic place, but so many people are. And I will put this phone down and I will walk inside and I’ll … There’s Charlie. Say, hi, Charlie dog. Say hi, Charlie. Hi, Charlie. She’s so cute, but she’s a bit wet, so she can’t come inside. And that’s Rosie. Hi, Rosie. They have a play date every Friday. Community. They get together and they have their little girlie play date every Friday night and they … Charlie comes home and she’s exhausted, can’t do anything afterwards.

So, that’s all I want to talk to you about is community. This morning at the gym, for example, I had a long hot shower and there were about … I think there were five of us from this neck of the woods all at Fitness First in Willoughby this morning … Shout out there. And after our class, we were all standing in the change room and about to go in our showers, and we were like, “Oh, I’m so looking forward to that on hot shower.” And I think we probably took a lot longer than most people in the showers at Fitness First, as that hot water streamed down on us. But we were talking and we were like, “Do you need us to do anything for your kids?” And we were like sharing these conversations, “Do you need anything? Can I help you? Can I …”

I’ve been in classes with these people and never ever had a conversation with them. I didn’t know this one woman was the mother of someone Elodie went to school with. No idea, until we’re standing in a towel in a changing room, talking about how great a hot shower is. Community, people. Community. So what can you do over the next 24, 48 hours to just reach out to your community? And without having to lose all power to be able to do so. Knock on your next door neighbor’s door. Just go chat to the guy in the butcher shop or the chemist. Anybody. Reach out to an old friend you used to dance with and say, “Let’s go dancing.”

Do something analog and fun and connecting with someone. That’s my challenge to you. Do something community-minded over the next 24 hours? And hopefully by tomorrow, we’ll have power. I’m not very hopeful. At the moment, they’re saying Sunday, best-case scenario, Tuesday, worst case scenario. By then, I may be taking someone up on their offer to do my laundry, or I’ll go shopping. Night-night. Happy Friday.