[365 Days of Extraordinary] Day 168 Transcript: Q & A Should Children Help

So here we go, Facebook Live on night number two of having power and electricity and lights and fun in my house. And I said to some of the people tonight, “What should I do my Q&A on?” And the resounding thing was, should children help? And I think they should. So, today a lot about kids have this sense of entitlement and this sense of, “Everything’s going to be okay. Our parents will look after it.” And that’s not how the real world actually works. There’s not enough parents, I don’t think. And some of the people that are going to be watching this are going to be, “Oh Sam, don’t talk about it.”

Not enough parents actually make our kids do shit. Sorry, we don’t. And I can hand on my heart say, I did that for a long time. I did not make Elodie do enough, and it’s not good enough. Our kids are not going to actually get anywhere in life if they don’t get taught that they have to do stuff. So, whether it’s helping make a sandwich or whether it’s smushing their own avocado on their toast in the morning. Or it’s taking out the rubbish, or walking the dog, or cleaning, or doing a lot of washing, or ironing something. Maybe not that, because I don’t believe in ironing. It’s like yuck. We have to make our kids do more. 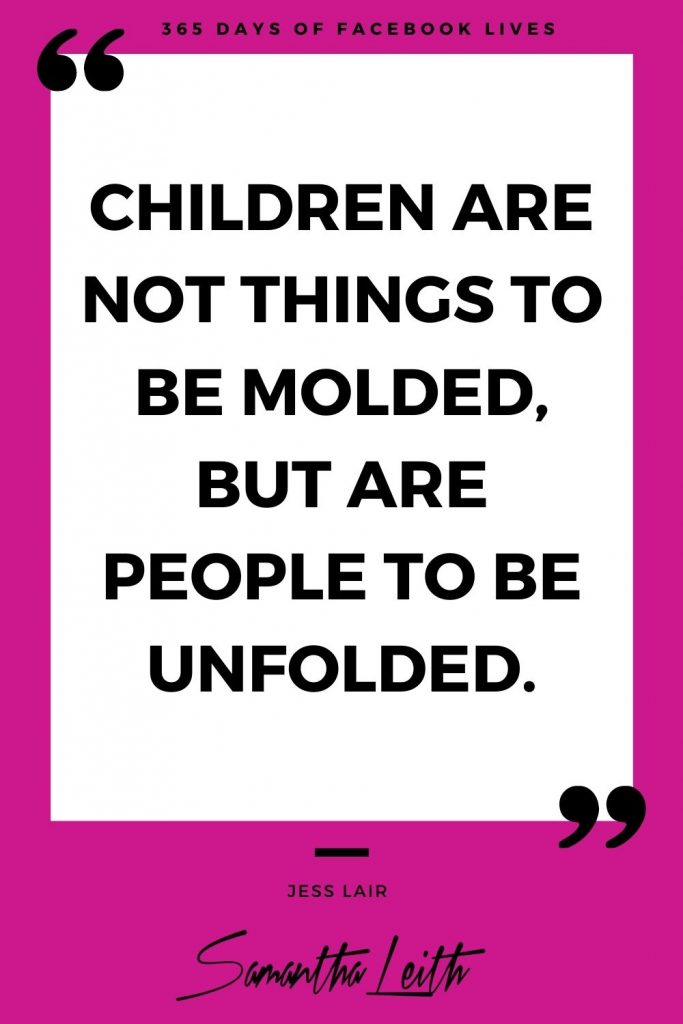 So make it equal, make it equal. For every time you do something like in your household, make your child or your partner do something else. Having said that, you can’t make someone actually do something. But it should be a conversation where they do want to contribute to the household. And when you’ve got little kids, oh my God, the fun stuff you can get little kids to do is awesome. And they feel so involved. If it’s tying a little bow on something, or putting a lid on something, or putting something away, they think they’ve been part of something incredible. And you grow from that, and your kids start to think, “Oh, I get to do this.” And then they get to lick the bowl. And the licking the bowl thing for them is the really, really exciting thing. But the thing that they actually learned was they got to help make something that everybody could enjoy. So it’s not, it’s just kind of cool to do. It’s kind of cool to do.

So for every thing I do in this household, and it’s a two people household. It’s Elodie and I for week on, week off. I make her do shit. And I don’t make her do the yucky stuff. I’m primarily responsible for washing and dishes and stuff like that. But she makes dinner three nights a week. Completely 100% of her responsibility during those meals. And she loves it. And it’s given her a sense of independence and a sense of contribution. Because every time, when you think you’re helping your child by not making them do something, you’re actually taking away their ability to contribute to your lifestyle and to contribute to the family and contribute to what’s going on. So you’re not doing them any favors by helping them out. I know that’s like the world’s biggest oxymoron. You’re helping them out, but you’re not helping them out.

But this sugar coated ladeling, “Oh, just make you filling peaches and cream so you do need to do anything,” doesn’t help them. They will get more out of stirring that bowl or putting that plate out or wrapping that present or taking the garbage out, because they’ve contributed. And you don’t get to know how good the contribution is until you actually could contribute. And when you’re in your 30s, 40s, whatever, in my age, the more we contribute, the better do we actually feel about our lives. For everything I contribute there’s a greater sense of joy, pride, love, satisfaction, enjoyment.

I even get nostalgic about contributing. And that’s ironic, because how can you be nostalgic when something’s actually not that old? But bear with me here. When you’re doing something, particularly for a group of people. If it’s a charitable organization or a group of friends or family that you contribute to, there is a sense of nostalgia to that. Even if it’s not a long time ago, it’s just nostalgic. And that can be a beautiful feeling. So the Q&A tonight was, should we make our kids do things? Yeah, we sure as shit should make our kids do things. I’m going to make Elodie tonight go around and pick up every single cardboard packaging from the [inaudible 00:06:51] boxes to the Prosecco and popping candy honeycomb boxes, and help clean up. And that’s the payoff for the fun that she had for hours.

The fun that she had for hours with friends, the payoff is cleaning up. And in life there is swings and roundabouts. There is a balance. For every good thing you do there is something you had to do in this life, or whatever. For the exciting, exciting thing you get when you’re interviewed by someone or you’re on stage by someone, there’s a not so exciting, I’ve got a write what I’ve got to do on stage. Or I’ve got to send the press release out and try to get interviewed. So there’s that flip side to absolutely everything. And kids should experience that. So don’t let them get away with not doing shit.

Because when you get your kids to start doing stuff, they start wanting money. Yes, they want to get paid. Not much, but they want a little bit. So yes, make the kids do anything. If it’s buying groceries, walking the dog, anything, just get them involved. Because their work life involves, what’s that four letter word? Work. Make them work. They have to work. They have to work. They have to work. And if it’s folding up a box of [inaudible 00:08:50], putting in the recycling, it is work for some teenagers. So make them do it. And that’s a contribution to your life and their life at this point. And it will go on to better things. So yes, Q&A Sunday, get your children to work. Have a good night guys. Bye.