Good evening, ladies and gentlemen. Could we just take a moment to acknowledge my new glasses? How exciting are these? Woo-hoo, woo-hoo, woo-hoo. And because of the shape you can’t tell I need my eyebrows waxed. Yay, bonus. Love them. Very, very, very happy. Where did I get them from? Bailey Nelson. Yes, thank you, [Bron 00:00:29], for your recommendation. I’m very, very, very happy with them. And how cool is… The inside of the glass case kind of matches my frock. Okay, that’s hilarious. I didn’t notice that before.

Yes, 45, and yeah, the eyesight is rapidly decreasing. I’m very long-sighted. Not that you need to know that. Okay.

But actually, it brings me to tonight’s point. Why don’t we do what we know we need to do? And I probably should have started wearing glasses for work on my phone and my laptop and things a long time ago. And I kind of was like… Because I could still see, so I kind of avoided it. So I started wearing it, then haphazardly wearing them, was on my Kindle or books or lots of work on my laptop. But yeah, hit 45 this year and gone downhill. So still very long-sighted, but definitely need them for… What are those worst ones? When you try to read the ingredients on the back of something and you’re like… So then you get out your phone and you’re like… To take a pretend picture so you can enlarge it and see what the ingredients are, or the instructions. Okay, off the beaten track.

Why don’t we do what we know we need to do? So I’m going to give you five reasons. Okay. Five reasons. 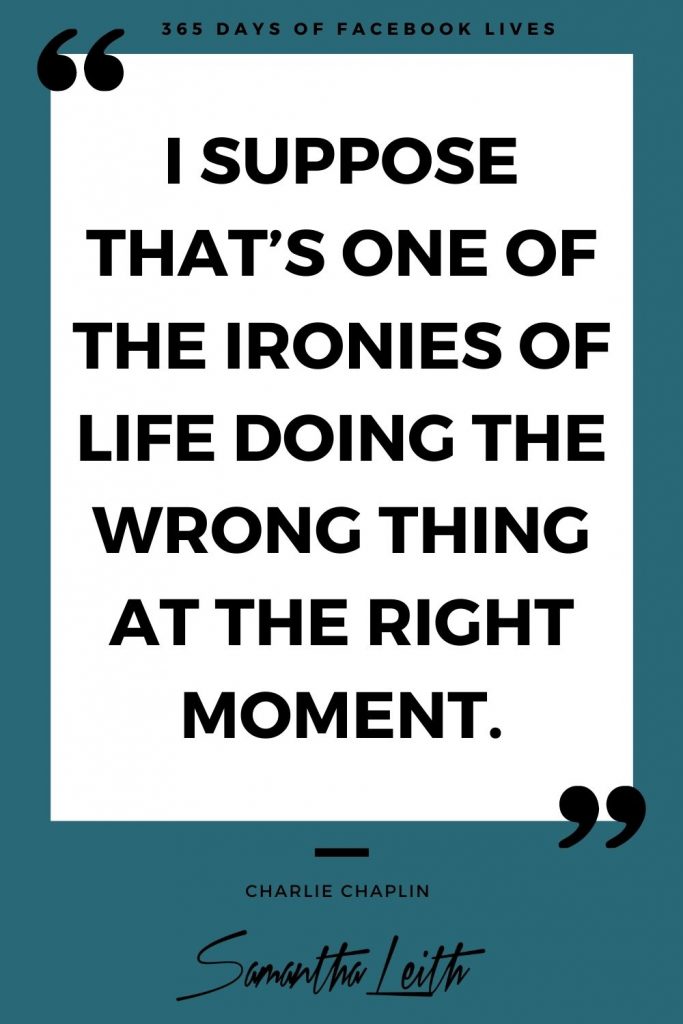 And you don’t do it because you’re comfortable at home just doing the work you’re doing. You’ve got the juggle of paying bills and they need to get paid. And just getting by. You’ve got that juggle down, pat. It’s like, you could juggle three balls in one hand, that just keep going, keep going, keep going. So you’re comfortable in a really uncomfortable state. And it’s kind of like… You’ve all heard the saying Stockholm Syndrome where you kind of start to find empathy towards your captors and you don’t know any different. Well, sometimes in life, when you are in really uncomfortable situations, it just becomes the norm. So, you know you’d be better off doing something else, but you don’t do it because it’s normal to be where you are, for you.

Weight is a great example of that. You know you need to lose weight. Yeah. I’ve told myself that story a million times a day for 45 years. And you don’t do it because you’re like, “I kind of like my clothes and I don’t feel too bad. I’m okay.” Excuse, excuse, excuse. It’s just you know what you need to do and you’re not doing it.

Another one is avoidance. So I kind of put avoidance and fear… Avoidance is kind of part of that fear family. But you know you need to get a new job. You know you’re not going anywhere in the current organization you’re in. There’s no where to move to. The boss has been there for 500 years and never going to leave. You don’t want to keep getting shuffled sideways, but you don’t apply for any other jobs because, oh god, you want to avoid writing your CV because it’s a bit scary because you haven’t done it for a long time.

What do you wear to an interview? What if they do an interview? What if they don’t call you? Oh, my god. How bad would that be? If you knew you needed a new job and you applied for a new job and you didn’t hear back from anything. Oh my god, that would be terrible. No, it wouldn’t. You would just feel bad for a little bit because they didn’t call you back, but you still would have done something to take action on doing what you know you need to do. Okay. What’s the worst thing that can happen? You feel like shit. Best thing that can happen. You get a new job.

Actually, the worst thing that could happen is you stay where you are not doing what you know you need to do. That is the very worst thing, I think, personally.

Do you know how good doing these videos has been for me? But thank you so much for those of you that watch them, that share them, chat with me, comment, et cetera. Brilliant for me. And I was totally stuck. I knew I needed to do it. Oh my God. Every passive action book I ever read told me I needed to do it. Every leader I followed, every mentor I had, every coach I had. It was like video video, video, video video, you’ve got to do it, got to do it. Didn’t do it until I started these lives. So, thank you for being the guys that got me out of being stuck in my perfectionist loop on doing something I knew I needed to do. Past tense now because I’m doing it.

Last one is planning. Yes. The other P word. We like Ps. If you know you need to do something, let’s go with the diet or the food plan one. If you know you need to do that, but you don’t plan to get rid of the shit in the house, meal plan for the week, prep, put in your calendar when you’re going to do the prep or do the shopping. Have an app for your tracking, all that kind of stuff. If you don’t plan all those things you’re going to fail before you have started. So planning is key, absolutely key to getting done what you know needs to get done. Like really, really, really key.

So it really put me four days behind in so many things. Massive lesson for me on that one. That was an absolute Samantha Mary Leith, you shouldn’t have been doing that.

So that’s why I wanted to talk to you today about why is it we don’t do what we know needs to get done. So I’d love to hear from you tomorrow. Pick one itty-bitty, little thing that you know you need to get done and just do it. As Nike says, Just Do It. Send me a message. Send me a DM, comment, whatever. Let me know what you did. How scary it was and how good it was when you actually got it done. And if you want to keep in touch with me, head on over, because there’s no join here button, head on over to samanthaleith.com and sign up for the seven-day confidence challenge or just get on the newsletter list and get your weekly dose of sparkle, in my new glasses.

Oh wow, they make such a difference. Scary.