Oh gosh, that’s a very dirty screen. I think that’s my make up. Hang on. I’ll just wipe it. Hi! So it’s quite late. It’s Wednesday night and I had a gig tonight. I did this new show called Modern Family, and I … So tonight, I actually want to talk about second guessing yourself.

I’ve always had an ability to, if I was going to get something wrong in a song, I’d make up new words. I’d fluff, whatever. No one would ever know. Tonight I decided to use technology and have an iPad, as many contemporary singers have, an iPad with lyrics so I could catch up and go, “Oh, that’s where we are.” Et cetera.

Problem was my brain’s not used to that kind of work. Instead of trusting my gut and going, “Sam, just sing the songs and if you miss a word, it’s okay. No one will know.” I kept looking at this thing and it wasn’t a comfort. I actually think it was a bit more of like a noose around my neck. So then if I made a mistake, it was like, “Oh my God, I got this bit wrong. This bit wrong.” All that … and eh. 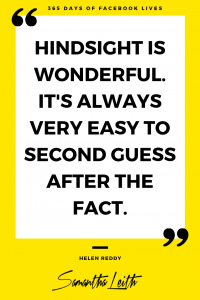 No. Don’t do that, people. Trust your gut. Second set … second half of the show, rather, I had a [front 00:01:13] change. Had a two front changes. I trusted my gut, and I wasn’t scared about this technology, and I wasn’t worried that people would go, “Oh look, she got that word wrong. Don’t Tell Mama.” I didn’t even sing Don’t Tell Mama.

And I let fear guide me tonight and nerves, and I never used to get nervous. I had this thing, and I apologized for making mistakes, and I kind of … I guess maybe I’m dumbed myself down a little bit while in the process of doing that. I had a little check in with myself in the break between the sets, I was like, “No, Sam. That’s not good enough. That’s not who you are. Just get out there and do it. And if you make a mistake, keep going. It doesn’t matter. No one cares.”.

And you know what? The second half was so fricking amazing I wanted to go back and do the first half again. I would’ve done all those songs again in a heartbeat, and I probably wouldn’t have made any of the mistakes that I did make in the first half. That’s all I want to talk about is the trust your gut. And if you’re not used to using something, don’t use it on a stage. What was I thinking? Just get out there and do what you do.

In any of those situations, the real you will shine through and it will all be okay. Yeah, we do all make mistakes. People only noticed them because I pointed them out. Crazy! But I did have a good time and I’m going to be doing it so much more. We had the whole night videoed, and photoed … photoed. Is that a word? A photographer there and a videographer there. So I’ll be posting stuff for the night and be doing more gigs. I’ve got some exciting news come out for Sydney Fringe Festival, so I’d love to see you all at some of those. And next time, no iPad.