Morning. Oh, you’ve got to see this view. I’m staying next to a castle. Surely Elsa or Rapunzel or someone’s just going to jump out of there any second. But that has nothing to do with this live. So today’s live is about perseverance and stickability and stick-with-it-ness. If that’s a word, is that a word? Can we make that a word, Elody?

Stick-with-it-ness with lots of dashes. So today my family, you may or may not know, have a restaurant/bar in Alexandria in Sydney. And today they found out that they got a number one gong from a food blog for their favorite place this year, which is just freaking awesome. I’m so proud of them. Now they’ve had that place for nearly two and a half years, I think it is. It’s gone through a couple of swings and roundabouts and changes, and they’ve changed the setup of it and changed the menu a little bit, changed staff a little bit, but it’s the fruits of their labor all coming together now because they stuck with it. 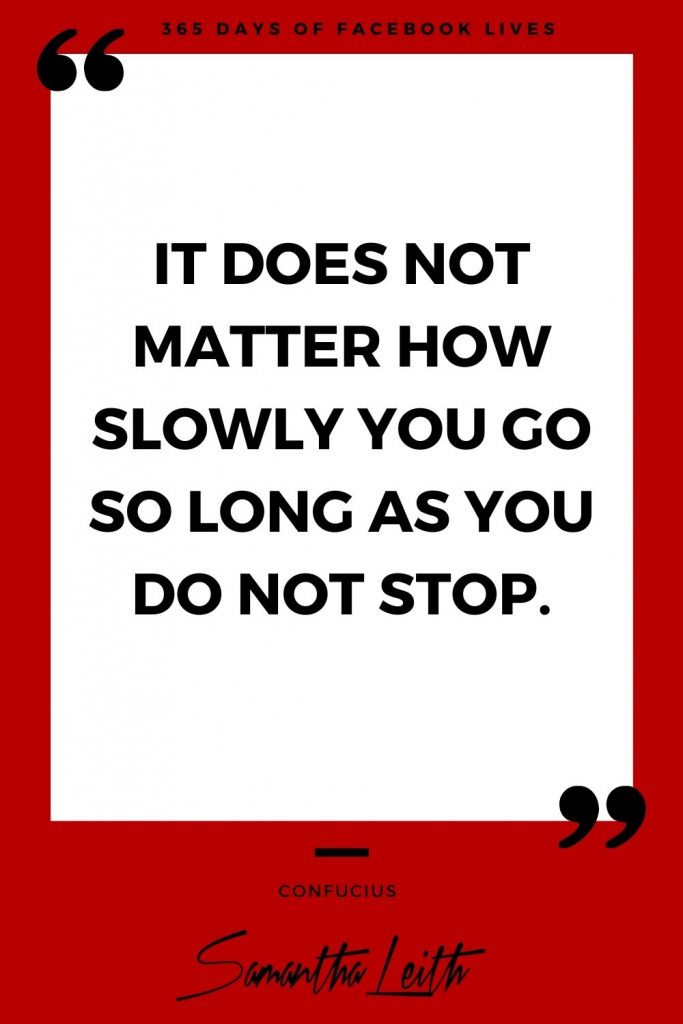 If you look at Uber, Amazon, Huffington Post, any of these big businesses, there’s in fact some great graphs about how long a lot of these businesses took to actually be really… I’m trying to it so you get the view. Took to really get established and be really, really successful. And it’s a long time. People say, even you think of singers and people go, oh my gosh, they’re such an overnight success. Well they’ve been doing it for a very, very, very, very, very long time. Even the singer whose name I now forgot. What’s that song you find annoying? Dance monkey, monkey dance. What’s it called?

Dance Monkey. I say Dance Monkey because that’s my proper New Zealand accent. Dance Monkey. People say she’s an overnight success. Well, it’s just not true. She’s been busking and singing and recording and things for a very, very long time. So long in fact that people are coming out arguing about how old she actually is.

So just when you go to that moment and I do it… I have to say, one of my weaknesses is giving up too early. Categorically, I’ve almost lived in fear of my tombstone saying, “Here lies Samantha Leith”. Not that I want to be buried, but anyway, “Here lies Samantha Leith, the girl that almost”. Because I do tend to, I think I give up a little bit too easily. If you go on a diet and you don’t see a change on the scales the next day it’s, ah, there’s no point. If you launch a new product and only one person buys or nobody buys, ah, there’s no point, nobody likes it, it’s stupid, I shouldn’t have done it. Just keep sticking with it people, it’s really…

Oh, there we go. Perfect. Yes, you got me and the castle. You just got to stick with these things. Just got to stick with it through the swings and the roundabouts and the ups and the downs and the good times and the bad times. Perseverance is what really matters. The persevering, it’s the sweat, the hard work, the slog, and you stick in there. Every single time you think, oh, I’m just going to give up, it’s not working. Keep going. Because round that next hiccup could be the moment of absolute success for you and your dreams, no matter what they might be. It could be about making money. It could be about making a baby. How many people want to give up and then it’s that last round of IVF and next thing you know they’re holding a bundle of joy.

So don’t give up. As we come to the end of the year and there’s only a couple of days left, we can be tempted to go, ah, bugger it. Nope, didn’t get what I wanted, so stuff it we’ll start again 2020. The roaring twenties. Don’t. Keep going. Keep making it happen in that last couple of days because you never, never know. It could be that one phone call, that one thing you write, that one thing you do that changes everything. Happy… I don’t even know what day it is? Is it Friday? Saturday?

Saturday, I think it’s Saturday. From Budapest and I will see you all tomorrow. Bye.