Hey. So it’s Monday night for you guys, Monday morning from me. We’re leaving Budapest today and heading to Prague, which is really exciting, never been there either. Prague for New Year’s Eve. Whoo!

Speaking of New Year’s Eve, one of the things I took some time to do this morning, because we didn’t want to race around like blue ass flies, was clearing space for stuff, all the good stuff that’s going to happen in the New Year. Hey Johnny, happy not quite New Year.

So one of the things I’ve made a really good conscious decision to do is clearing space in my mental load. It’s funny, even if you don’t actually read all the emails, like say you get newsletter notifications from people, or shopping updates, subscriptions, that kind of thing into your mailbox, even if you don’t open them and read them, if you have to go, “Oh yeah, that’s….” I’m trying to think of one now, “That’s David Jones. I don’t need it. Don’t want anything. Not going to read it,” delete, it’s still taking time and thought. And if you go, “Okay well I’ll have a file that to read later,” which I used to do, especially a lot of email marketing newsletters, subscriptions and things, because I’d want to see how they did things. I’d move them into a folder, and I go “Oh, I’ll read that later.” And you know, never ever read them, ever, Like ever, ever, ever did I go back and go, “Oh this email so and so said, and that was a really good headline.” Just no, I don’t do it.

So even the act of those things takes mental load. And one of the things I really want to do this year is just stop all that additional stuff. So I’ve literally unsubscribed from everything. Unless I’m actually paying for service, so like GoDaddy who I buy my web names from, or now I’m trying to think of things, my banking things, or a course I may have bought. So Marie Forleo’s B‑School for example, I did that years and years and years ago, and I still like her updates. So I might do a bit of B-School again this year. I’m not sure, I’m kind of thinking about it. So I’m still on that list. But if it’s some freebie I’ve downloaded at some point, and no offense to any of you whose stuff I’ve downloaded over the years or read, but I’m unsubscribing from all of it. I’m unsubscribing from the dress people. I like. I’ve unsubscribed from news things. Just get rid of all of that space. 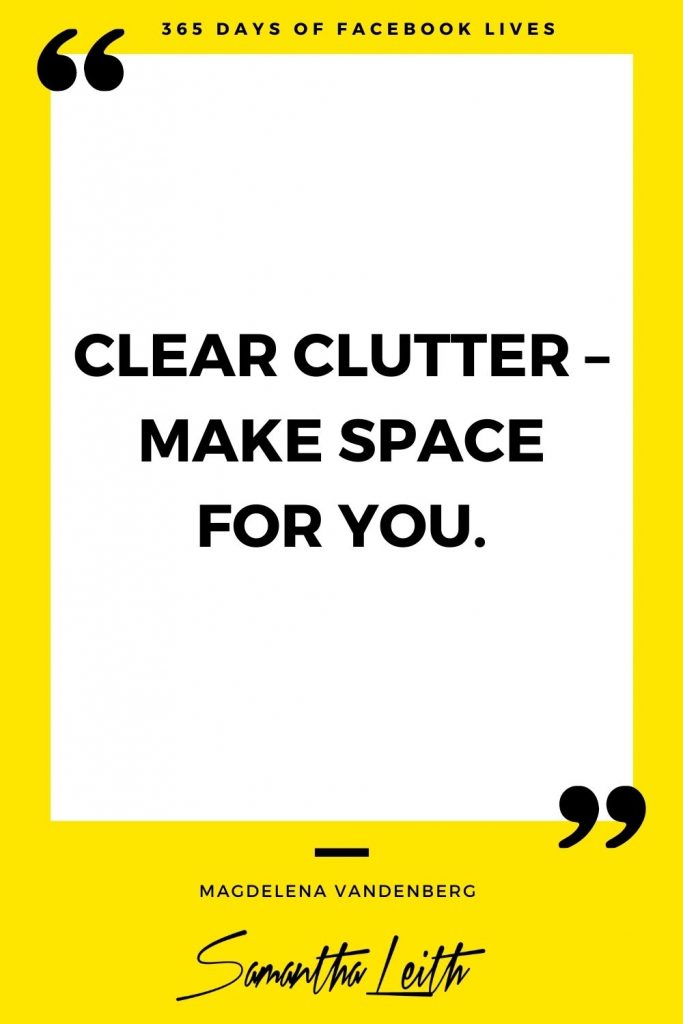 And my next challenge, so I’m challenging you to do this as well, because sometimes it’s like, we don’t want to miss out on something “Oh my God, they may email me something so exciting. And if we don’t get the email, I’m going to miss out on it.” But guess what? If you’re not reading email you’re missing out anyway, so what’s the point? So just get rid of it, get rid of it. I think I will literally probably stay on handful of mailing lists, like a handful.

And the other thing, next is on my list, is groups and following people on Facebook and Instagram. I follow way too many people on Instagram. So I can’t see kind of things, so I’m going through and like, go, go, go, go, go, go, go, go. If you’ve added me to a group on Facebook, chances are I’m going to pull myself out of it because I’m not engaged in there. What’s the point? You know? I love Camilla’s, love Camilla’s. I’m in a couple of Camilla buy swap groups on Facebook. I’m making conscious decision in 2020 to not by many clothes, so I’ll come out of those groups. At least definitely not be notified on anything, which I’m already pretty good with notifications and not getting things.

But that’s my suggestion to you, because tomorrow’s the 31st, and if you say, “Oh, I’ll do it on the 1st, it’s a New Year’s thing, I’ll get done.” Chances are first, you’re not going to get it done because you’ll be too busy making New Year’s resolutions, that you won’t stick to. But more on that, I will get to that, I will talk about that more.

I’m doing a whole lot of stuff in my new podcast, which is exciting, in January, on how to set yourself up for success in January with all the planning, et cetera. So stay tuned for that. But yeah, just spend an hour today, half an hour, a little bit of time, 15 minutes, whatever it takes and just go through and unsubscribe out of everything. There’s a great thing called unroll.me, which helps you with those kinds of notifications and getting out of things, and then go on to Facebook and just jump out of all those groups have been added to, that are adding no benefit to your life, and you’re not adding any benefit to the other people in the group. Because it’s the other way to think about it, like if you’re taking up space in that group and not actually doing anything, well what’s the point?

So there you go, that’s my last. No, not my last challenge, because tomorrow’s the 31st, so tomorrow will be my last challenge for the year. Have a great night and I hope whatever you have got planned for tomorrow night is working out really, really well. See you in Prague.