What I mean … Hello! What I mean by that is we have these dreams in our heads that we actually don’t put into fruition because I think for some of us sometimes, it’s actually better to have the dream. If you’d actually bought the lotto ticket and you’d been thinking what you could do with the money, et cetera, and you don’t win the lotto ticket, there’s this terrible disappointment that you then don’t get to do what you wanted to do. Whereas, if you don’t buy the ticket, you kind of don’t get disappointed because you can still go, “Oh well, if I had bought the ticket, I would’ve won it and it would all be fine.” How does that convert into real life? What the hell is the point in what I’m saying? 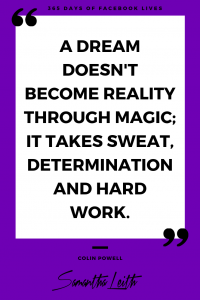 The point is I think we do that in life. I’ll give you today for example. I had something I had to get done today, and it was pretty important, and I had a really busy day, so I will preface it by saying I actually probably didn’t have the time to do it. But maybe could I have made this phone call while I was rushing to the loo or … no, I was that on the phone all the way in the car. I probably could have found a time at some point to do it, but I realized tonight I was still in my mind concocting how great that phone call was going to go, and I never made the phone call. I’m not disappointed about the how the phone call did or didn’t go because I still have that lotto dream in my mind of how great that phone call was going to go.

I think I’ve definitely done it more times than a kid would admit because it’s kind of embarrassing, and I think more of us do it than we actually think. Say you see a job in a paper and you think, “Oh my God, that’s a great job. I’d be so good for that.” You’re like, “Oh, what would have where on the first day and all my new business cards and …” Week later you realize you never applied for the job. Then you find that someone else took, got it, got the job, didn’t take it, they got the job and you’re like, “Oh hell if I’d got … if I’d applied I would have got it.” How many times have you done that in life? Like seriously? I think it’s a combination of a fear of failure and a fear of success. I think we all actually have that. Hello! While we have those dreams, none of them matter. It’s just bonkers because it holds us back.

How many times have you not gone for something you wanted because you’ve convinced yourself that this is the la la lotto land in your head of how it’s going to happen. I can hand on my hearts say I’ve done that twice this week where there was something I haven’t done and the next day I’ve gone, “Oh shit. I just kind of pretended in my head how it was going to go.” First one I have done. Second one I have [inaudible 00:03:39] done. Second one I will do tomorrow because I can catch myself in it now. Yeah, occasionally I still go past a lotto sign and go, “Oh well, you know if I’d got a ticket I could’ve done x, y and z.” I never buy the bloody ticket. I [inaudible 00:03:54] encourage you …. all the time. Thank you. I know it’s like we have this … oh my God, I would look so good in that dress that I’ve seen online, and you never actually research it, but in your mind you’re going to look hot in it.

Just take the fucking action people! You know what? If it is a lotto ticket, go buy a lotto ticket. If it is a job, apply for it. What’s the worst case scenario? You’re not going to get it. Okay. Worst case scenario for me today, I would have rung and they couldn’t answer the phone. Instead of me now spending the weekend going, “What would the phone call have been like? Oh my God, what would the phone call have been like?” I set myself … I trapped myself in that little loop. Don’t do it. Don’t live your life via lotto dreams. Okay? Just don’t do it. Take action. Now I’m going to go to bed because I have a birthday lunch to go to tomorrow. I’m driving the bus for the … Oh that sounds terrible. Not that kind of driving the bus. Driving my friends to a birthday lunch because I’m not drinking because I’m a bit mental. Have a great weekend. I’ll see you tomorrow night. Bye!