[365 Days of Extraordinary] Day 206 Transcript: Speaking About Your Achievements 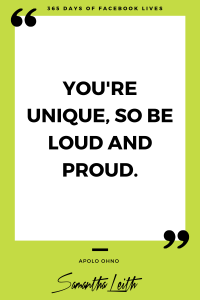 Kids get home from school, get home from daycare, get home from a play date, have something happen in the kitchen, and they’re so happy and proud of themselves because they’ve achieved things. And somewhere along the line, I don’t know if it’s when they’re teenagers, our parents… I know my parents like, “Oh no, don’t talk about what you’ve done. Everyone will think you’ve got a really big ego and a really big head.” And then everyone makes all those jokes about, “Who’s this? Someone walking through the door with a big head.” It is just crap. Be proud of what you’ve achieved and what you’ve done. No matter how big it is or how seemingly insignificant it may be.

Give you an example. Someone who shall remain nameless is a bit of a mucky pup when they eat. And recently they’ve eaten and not dropped anything or got anything on themselves and they’ve spoken about it. And it’s freaking awesome because it’s an achievement. When I get a new client, when I have a good gig, when I get a speaking gig, when… You know, a lot of the time I’m ashamed to talk about it because I really do have that… Still working on that belief that if I talk about good stuff I’ve done, people will think I’ve got a massive ego. And I don’t. I’ve got other massive parts, but we don’t need to talk about that.

I just wanted to touch on it briefly today. And I wanted you, over the next 24 hours, 48 hours, if you achieve something, or something good happens, no matter what it is, talk about it. And don’t talk about it from a, “Oh, see how good I am.” Talk about it from a genuine, “Hey, good shit’s happened and that’s awesome.” And don’t be afraid of it. That’s all I want you to do.

I’m going to start doing it more often. Well, try and do it more. No. There is no try, there is do or not do. I’m going to do it more often because I think we need to. I think the people that get the furthest in life have no fear about sharing the good stuff that happens. Or the bad stuff, but especially, I think, giving yourself a pat on the back and being able to talk about those kind of things is a really, really awesome thing to do. Until we meet tomorrow, talk about the good stuff. Bye.