Hi guys. Sunday night for you, or Sunday morning, depending on where you are. And it is Sunday, so it’s a Q and A Sunday. And this week, I’ve had a couple of discussions with a couple… Two people actually, about visioning, and some questions that came up about that. And I wanted to explain that visioning is so much more than just sticking pictures and putting them up on a wall, or having a poster, or like I did with my diary, having my vision board diary kind of thing. There’s so much more involved in visioning to manifest… And I don’t talk a lot about manifestation and that kind of area, but I do greatly believe in the power of a full sensory visioning kind of work that I have done over the years. Helped me get my house [inaudible 00:00:00:58]. Aah, just so much stuff.

So what do I mean by full sensory visioning? The first thing you can do is do the traditional visioning stuff, like a visioning board or diary. Have stuff… Just have pictures stuck on your wardrobe, all those kind of things. Any of those pictorial visual aids. Really, really important.

The next thing in full sensory visioning is writing stuff. So I’m talking about writing down those visions. I’m talking about writing something across your bathroom mirror, or having… Opening your wallet and seeing something written there. So we’ve got the picture stuff and we’ve got the word stuff, and they form two parts of this full sensory visioning. 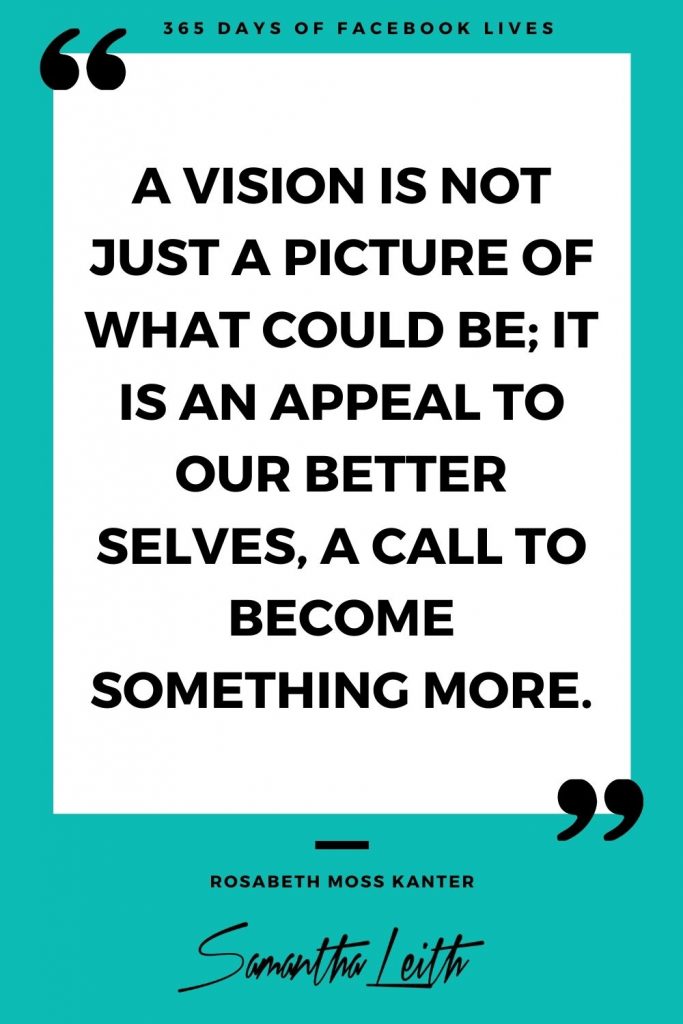 Then the third part of it is putting yourself into those situations. So I’ll give you an example. Before I bought the house that Elodie and I live in, it took me two years to buy it, and it’s a really big story and it’s a beautiful story, and I will share all the story one day, but I would literally pick Elodie up from school and drive past this house a few times a week. I had a poster that had the floor plans of the house, and the date we were going to move in, and the amount of money I was going to pay for it, all that kind of stuff. So that goes back to the words and the picture stuff. But I put us in there by driving past the house all the time. I put us in there by going to shops and looking at the kind of furniture I’d need to add to be able to make this home ours. Third step.

The fourth thing I think is important… Oh, the light’s just starting to come in so I’ll just [inaudible 00:02:40] a little bit. The fourth that… Worse. Ooh, that’s better. The fourth thing is when you actually go to places to bring a bigger visioning feeling, joy, a excitement, a plan, all those kind of things. So what do I mean about that? Well, this trip for example, is a massive big visioning exerc… Full sensory visioning exercise for me. I wrote about it. I had pictures cut out of it, and then now I’m here, now we’re on this trip. I’ve taken that visioning to another level by seeing and smelling and tasting and touching, and doing things that are at the next step. They’re the next level. They’re what I want my bathroom to look like when I am able to renovate, the next kind of hotels I want to stay at. The next kind of… So it’s all that next step stuff.

So whilst I may not have the funds now to do the stuff that I want to do, or and have done not everything we wanted to do on this holiday because of that, I’ve had like a taster, a teaser. I’ve walked into the shops. Or we’ve gone to that kind of restaurant but not had a full meal, had a snack. Or we’ve tried something on but not bought it. You get what I mean? We’re putting ourselves in to the experience.

So I think for me, they’re the keys to visioning, and other people have other things that will tell you work. It’s one of… Visioning’s one of those things that I think is different for everybody. Some people don’t like to write, they just like to have pictures. Some people write, don’t have pictures. Some people do meditations about their visions. Some people… But the things that have helped me, and that’s what Q and A is all about, is the visual, the pictures. Absolutely having those pictures around the place. The written word. I write it. I have it in my… As I said, I write it, I carry it, I have it in my car. I’ve got things stuck on walls. I write on my mirrors, all those kind of things. Written word, written word, written word. When I meditate, I do do… Not every day, but sometimes I do a visioning meditation and I try and get all that really, really seeped in.

And then that last step in that full sensory visioning is putting yourself in a situation. The drive-bys, the going to the restaurants, the looking at the shops, the planning the trips. All that kind of stuff really, really gets all the juices going in visioning.

So that’s my tips for visioning what you want, when you want it. And bloody go for it guys. Happy Sunday. Bye, see you tomorrow.