See my bookcase [inaudible 00:00:02] Recording, kick it up, blah-di-blah-di-blah. What was the point of that? I was finding in my bigger screen I didn’t like sitting under the bookcase, but that’s beside the point.

So, Sunday night. My Sunday night check in, what I do kind of thing. I sit down with my beloved, good old-fashioned diary. Yes. So what I’ll show you is this great diary here, is actually called My PA Planner, and it’s the first time I’ve had this one, I got it earlier this year. So every week there’s actually a weekly review, where you get to review, reflect, improve, then have ideas, inspiration, et cetera.

I got to say, I’m not 100% perfect, at anything in life, but I’m definitely not 100% perfect at doing all the bits that are involved in this weekly check out. So it’s like, how many sales did you make? How many new email subscribers did you get? Social media growth, which I love, I love actually being able to track that, except I don’t use Snapchat, or Tumblr, or Periscope, but the other ones I do use. Achievements, big and small, what worked, what didn’t work, what goals didn’t you achieve? 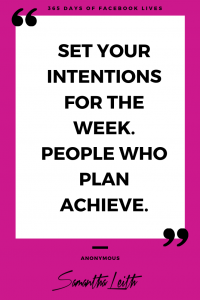 Because why that one’s important is because this week it’s going to be important to look at why you didn’t achieve those things last week, and what you need to put in place this week to actually make those things happen. Which I’ve had to do, because I didn’t achieve my four times at the gym last week, excuses coming out of my ying-yang; my gig, photo shoots, deadlines, blah-blah-blah. But this week I now need to up my game, and make up for some of that. So what do I need to let go of in order to make those things happen? Which is an important one.

So what I do every few weeks, is actually look at all the ideas I’ve had in my little idea and inspiration vault, and go, “Oh, that’s not a bad idea, I might actually do something with that now.” And then there’s a section that says, be inspired, doodle, scribble, mind map or brainstorm. I’m good at doing the brainstorming bit, I’m good at doing the scribbling bit, mind maps do my head in, and if I doodle, chances are you’re going to think it’s a Tyrannosaurus Rex, and it’s actually a pineapple. Drawing is not my greatest achievement, so I’m better [inaudible 00:03:34] actually thought my writing was bad. Maybe I’m just not good with instruments, good thing I’m not a surgeon, oh my God, imagine that. Me making point form notes and things like that, is generally what I do in that section.

Then, so that’s like the weekly review of the week. And then you get the week as it is. So it’s laid out just in format like that, you know blah-blah-blah. And I’ll sit down with that and then I’ll also open my iCal, look at all those pretty colors, and I’ll make sure I’ve got things that are in there, in here, and vice versa, so I’m not stuffing up on anything. On the week open one, gives you regular action, goals, projects, calls, that kind of thing. Anything you want to read, notes, anything you’ve got to buy. This was funny the first week at the beginning of the year, then I was like, that’s really cool like big things you got to buy, noting it in there. That’s not an excuse to go online shopping and buy dresses young ladies.

And then it’s got from 07:00 a.m. to 08:00 p.m. throughout the day, noted for you. Three goals to focus on each day, water count, number of minutes meditation, exercise, et cetera. And then again, you get to the end of the week and it’s the review. I’m loving this PA planner, I think next year I might try a different one, I like to try different ones all the time to see what come about. It’s good to have that review and know where you’re going this week.

And at the end of every month, it actually does like a monthly one for you as well, so cash flow, P and L, et cetera. And then it gives you your project planner, I can’t quite work out how to do this for the camera thing, without making everyone dizzy, to go through for the month. So what I’m doing now with this week in July, is going back to my July big project planner, and pulling anything out that can be put in for this week, to be actioned, or do I just need to forget about it because it was a dumb idea, or can I outsource it? Can I give it to someone else to do? Delegate it, you know my mantra; ditch it, delegate it, leverage and live it people, all day, every day. I swear by that mantra.

So that’s what I do every Sunday night. I also do, just to simplify my life, Sunday night’s also a bit of a batch cooking thing. So at the moment in the oven I’ve got some little eggy muffin things, a little veggie bake thing, so I’ve got lunches for the week. Because otherwise I just buy stuff and eat it, and that’s not good for me. Not for my budget, or my bottom. The two B’s. So Sunday night is just kind of that night, and then I’ll probably put on a face mask and jump in a bath. And give Charlie a cuddle, say hello, ahh, [inaudible 00:06:24] just wants love that dog. So I’m going to go and give Charlie some loving, have a great Sunday night, and I wish you all the very best, most productive, profitable, fantastic weeks. Night night.