Good morning, different time of the day today. We’re going to give this a whirl. Don’t know why I’m pointing. Don’t do the pointing finger. It’s like, I’m a wiggle. Today I want to talk about hustle. Now, there’s a fabulous movie with Jennifer Lopez, J.Lo, called Hustlers. That’s not what I’m talking about. There’s actually been a few movies over the years with the term hustle in it. There’s a Beyonce song called Diva, which she says a diva is a female version of a hustler, of a hustler, of a hustler, a diva … Getting sidetracked Samantha.

But what’s interesting is the definition of a hustler if we go to the Google says, and I quote, “A person adept at aggressive selling or elicit dealing,” or number two, “A prostitute.” So which of those would you like to be today?

So it’s a term that’s really thrown about a lot in business these days. Come on, we got to hustle. Hustle and grind. We’ve got to hustle to get where we want to get to. And it’s quite masculine and it’s quite go, go, go, go, go, go, go. And for a lot of people, the connotations are nasty. Like they really are. Hustlers are those sleazeball slimebag salesmen that will convince you that your dog will die if you don’t buy what they’re offering. They will. They’re very, very, very good at that. And a lot of the time, it may be the place you’re at. Let’s not go into sales techniques. 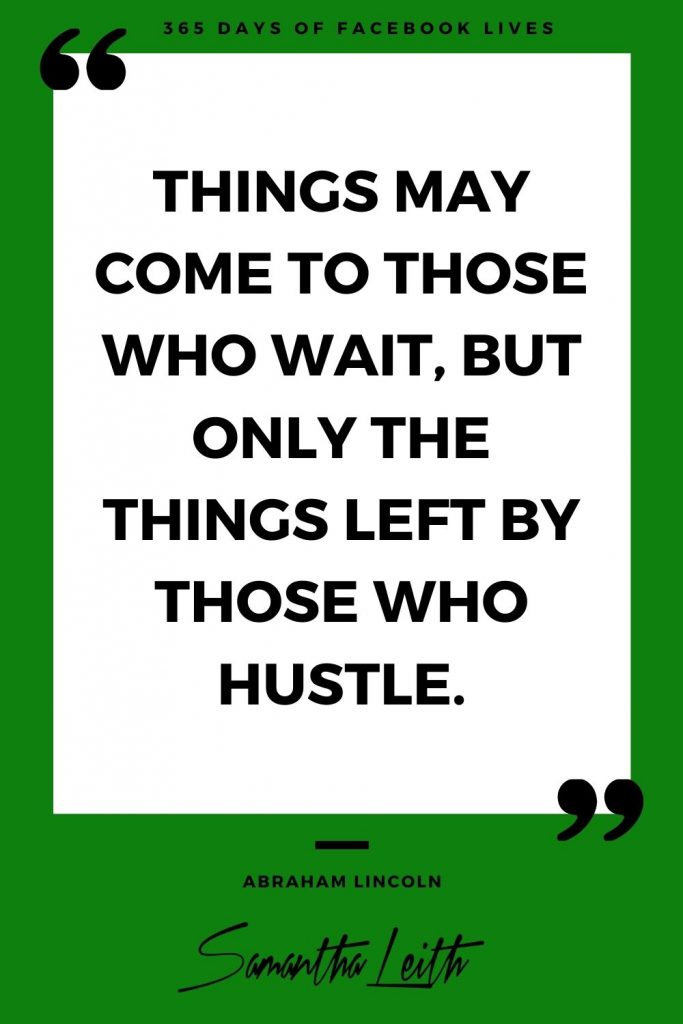 To get successful in any one of those areas there are times in your business and your life where you got to hustle. But the hustle I mean is working really hard, putting in the hours, making the calls you don’t necessarily want to make, doing the work you don’t necessarily want to do. And if we look at the definition they say, the number two definition about a hustler being a prostitute, chances are they don’t really want to be doing the work. So sometimes we just got to put in the hours and the effort to get to where we want to go.

The problem with hustling is it’s not an overnight success. So just like that [inaudible 00:03:15] many, many years ago, it won’t happen overnight, but it will happen, you need to actually hustle for a while. Hustling in business or hustling for any goal you want. It may be that you want to run a marathon. You better hustle your ass to get to the point where you can run that marathon. You have to put it the time and effort to get there. And if hustle is the term you want to use to help you do it, go for it. If for you, it’s bringing up all those sleazy slimebag salesman ideas, don’t use that term. Work hard. Come up with something else. There’s got to be something that makes you feel good about saying what you’re doing to get you to where you want to go.

Now, the reality is a lot of the time when people are in that hustle phase and they’re working really, really, really hard to get to a goal, to attain something, to launch a project, to make sure something happens, they’re putting in big fricking hours. If you’re a cheerleader and you’re trained for one of those big cheer squad things, it’s like four or five hours a day, the same jumps, the same jumps, the same jumps. That is a hustle. If you’re a writer, you’re sitting down at your desk and it’s 1000 words, 2000 words, whatever your deadline is, every single day, that’s a hustle. If you’re a singer, it’s the rehearsals. It’s the two hours of scales and singing every single day. If you’re a salesperson, it’s how many leads, how many people are you calling every single day? How many times are you reaching out to people every day?

So there’s a different version of hustle for whatever industry you’re in or whatever it is you’re trying to achieve. So don’t be afraid of it. And don’t be afraid of saying to yourself for the next 90 days, 30 days, six months, year, whatever I have to hustle like a mofo to get to where I want to go. It will not kill you. As long as you’re looking after your health, the hustle’s not going to kill you. So if you need to be doing 60 hour weeks, 80 hour weeks for a time, period of time to obtain something so then you can take the pressure off the hustle and the grind and relax into where you want to be, it’s not going to kill you for that period of time. I promise. But yeah, you do need to look after yourself.

So why am I talking about hustle today? Because well, for the next few weeks, probably the next three or four months, I really need to hustle like a mofo. Big goals, big dreams, big aspirations, lots of stuff I need to get done and I’ve committed to myself to doing. You can go back to the live on, do you honor the commitments to yourself because that’s really important. So from me to you, I just want to say, don’t be scared of the hustle. If you’re hustling, it does not mean you’re a sleazy salesperson or a prostitute, which is what it is according to Google. It just means you’re working hard to get to where you want to go. But just do it in the right way. Okay? That’s all. Do it in the right way and you will reap the rewards.