-my Facebook lives. And what started on Facebook as a kind of a lets chat with people, create a sense of friendship, community tribe, all of those words that get thrown around, has become a community now of over a hundred thousand people. And they’re all over the world, and today was their very Bitch Con, which was a multi-speaker event, and we went along, and it was fabulous. Absolutely fabulous. So congratulations to Jen [inaudible 00:00:52] for putting it on, and all of your team.

But what I wanted to talk about with that was, all the speakers that were there, and everybody we spoke to in breaks, lunchtime, afterwards, drinking wine, was how good it was to have these women that you could chat with that didn’t think you were a freak for wanting to do, Oh, you’d got that bit of a business idea, haven’t you? Oh, is that that little side project you want to do?

So although it’s one day of my life, and tickets were booked two months ago, I cannot stress enough how important it is if you have your own business, even if you don’t have your own business, if you work for somebody else, but you have those moments where you feel like, Oh, there’s just not kind of my crowd, or I’m not quite sure we should hang out, or who I should talk to, any of those kinds of things. You have to find those people. You will go mad if you do not find like minded people, like minded bitches, that you can actually say that stuff too. It’s so important. It’s so, so, so important. 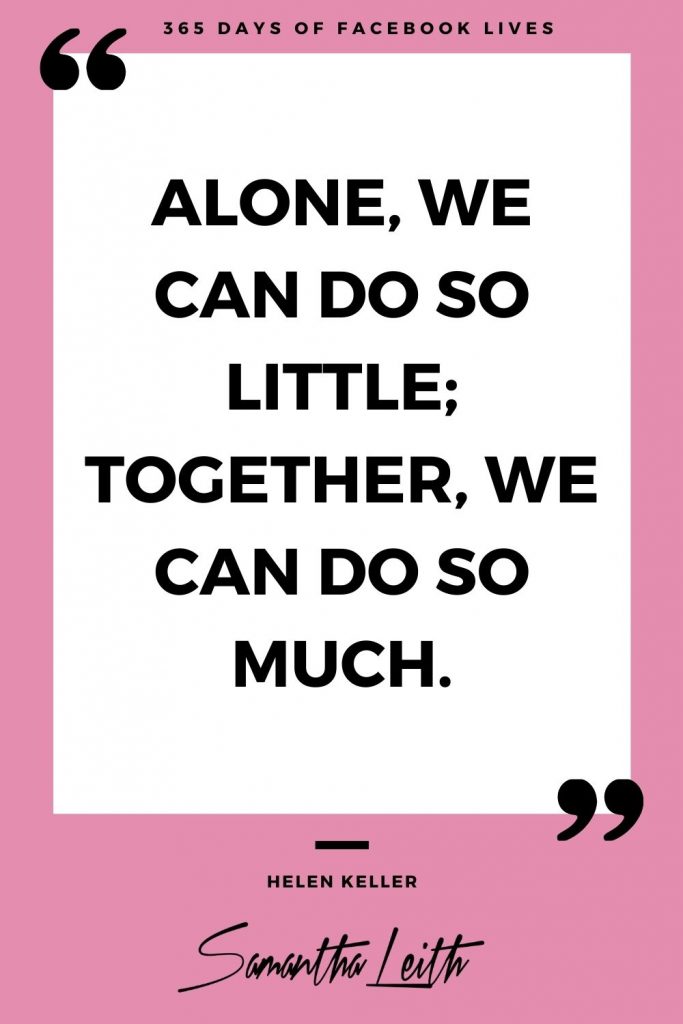 There’s only so many times you can have conversations with a brick wall, the cat, the dog, or your baby as you rock them, and they don’t understand what you’re saying, and you’re talking to them about what you want, before you go bonkers. You have to be able to sit there and say to someone, this is what I want. This is my vision. These are my dreams. These are my goals, and you don’t think I’m a nut job for thinking it.

Imagine Steve Jobs, if he had had all these dreams and these visions, and he’d never had an outlet for it. If he’d been stuck doing a job for someone and coding, even if it was marketing, and he had no outlet for actually saying, I want people to think different. Imagine if Mark Zuckerberg had never had an outlet to be able to go, I want to connect people. All of these people.

Now I first heard the word tribe probably 10 years ago. Hey, hello, gorgeous. Probably about 10 years ago, I heard the word tribe at an event. And I studied the stuff at the event about how you figured out who your tribe was, and it was all really, really analytical. And it was based on the percentage of people that liked this and how many people like this and where you’re going to find them, and all the demographical stuff, all the number stuff about how you find people. And that doesn’t work.

I can promise you that that does not work. You just have to meet people and go, Oh my God, these are my people. That’s it. It’s so, so, so simple. And whether that’s at a school gate, or in an office environment, at a paid networking function, an event like today, at a mastermind, at a retreat. Could be online. Your people, your tribe, the people that are going to listen to you and think, yay, go for it.

Absolutely, Marie, go for your goals because I might not have your back, but I think yay go you. You’ve got to find those people. Five minutes a day in spending time with the people that don’t think you’re a fruitcake for wanting something means a gazillion years in dog years. Actually let’s put it that way. Five minutes with people that have your back is seriously worth 10 in Labrador years. It’s so important. So find them. Just go into groups.

Meet one person online, and you go, Oh, I like what they say. Follow the groups they’re part of, see the events they go to. And if and when you can. Hi, Ariel. Yeah, thank you, I’m still on camera here. If and when you can, get to one of their events, because nothing beats in person, this is hilarious. This is a first. Nothing, nothing beats in person. And you may go, that cost too much money, or I can’t spend a whole day doing that, I’ve got to do the washing, I’ve got to do my [inaudible 00:00:06:47]. Make the time because it will pay back absolutely tenfold.

So that’s my little high of being a LMBWDW. It’s a long acronym. But all I want to say is get out there, go meet people that feel the same kind of things you do, learn something. Thank you to like minded bitches for doing today, because I did learn stuff, which is awesome. And I met a few great new people, and some locals, which is fantastic. So I’m going to extend my tribe.

And that goes back to yesterday’s video about networking and how icky it can be and awkward, and it really is just about having conversations with people. It’s not that hard. I’d challenge you to get out there and do it 24 hours before tomorrow’s video, or I might do it tomorrow morning. So yeah, go find one group online today, tonight, that you want to be part of a group of. Go for it.

Bye, see tomorrow. Now I’m going to get in the pool.