A new fabulous week. And today I want to talk about Failing Before You Fail. [inaudible 00:00:11] that just sounds a bit weird. Sam, what do you mean failing before you fail? Well, have you ever had a situation where you’ve wanted to achieve something? You’ve wanted a goal? You’ve set yourself a goal. You’ve gone, “Yeah. I’m going to get this. I’m going to get this. I’m going to get this.” And then a little bit of the way into it, maybe an obstacle whips up, maybe nothing really happens. And you actually can’t pinpoint the moment something happened, but you give up on it. And in my mind, that is absolute failure before you failed or failing before failure, whichever way you want to put it.

I, myself… This week, I want to talk about things that I’ve really had to deal with in my life. So this has been a big one for me. And I hope that by sharing these things, someone may watch this and go, “Oh my God, that resonated so much. I thank you, Sam.” And you don’t even need to say thank you. I just want you to get something out of it.

So I remember a situation many, many years ago, I had the opportunity to go overseas and do something I really wanted to do. It was with my singing, back many, many moons ago. And I didn’t do it. I totally failed before I failed. I allowed my limiting beliefs to stop me from even thinking I could try it. And then it’s a bit like the lotto dreams I’ve talked about previously, is when you stop actually going for something like that pre-failure, then you get to keep this story in your head of “Oh, but imagine how great it would have been had I really done it because I so would have got that. Oh, it would have been incredible. Yep. Bang would have done it. Would have nailed it. It would have been incredible.” But you didn’t do it, so you don’t have the proof. You failed before you failed. 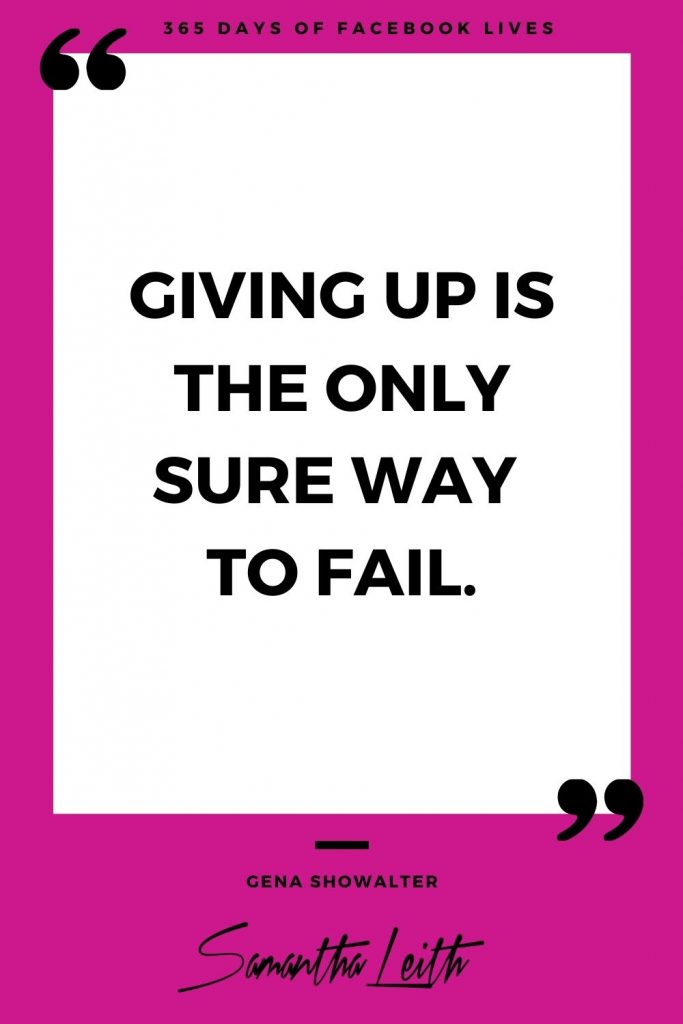 And I can honestly look back on my life and there’d be so many examples of me doing this. So many examples. Personally, financially, career-wise, romantically. God. So many ways. It’s like, starting a Tinder profile, chatting to two people and then taking it down because you’re too afraid they might not actually reply. You know, like really it’s… Don’t do that stuff, but we do it. We do it, we do it. We do it. And I think probably everybody does it. I’m pretty sure Tony Robbins would have done it at some point.

And what’s, so why do we do these things? Well, I think the number one reason we fail before failure sets, failure happens is our limiting beliefs. We’re not worthy. We’re not smart enough. Not pretty enough. Not any of those. We’re never going to get out where blah, blah, blah, all that negative self talk that goes on, I would say is the number one reason why we do this completely self-sabotaging act.

Think another one is being distracted. So if you’ve got a lot of stuff going on or your bright, shiny object syndrome, which I talked a little bit about last night, then that’s another way we go, “Oh yeah, stop. Out.” Failure before you failed.

Not having the right goal is another one. Because if you’ve set your goal based on something you think other people want, or will make you look like a success, any of that kind of stuff, then you’re not going to have the to see it through. You’re not. So you failed before you fail.

Another one would, is if you’re working on your limiting beliefs, working on that stuff, you really set what you believe to be the right goal. And you’re totally focused on it, but obstacles are popping up, and you haven’t planned for those obstacles. You haven’t worked out how you’re going to deal with when the you know what hits the you know what. Then you’re out. Fail before you fail.

And lastly, so I’m going to give you five reasons. I think lastly is not enough faith. Not enough belief in you actually doing it. And this is different from having a negative or limiting belief about yourself. This is really that goal just being set where it’s outside the realms of your possibility. Now don’t get me wrong. A goal has to be scary. It’s got to be a stretch to make you do the work to get there. But if you don’t have the faith in it, if you don’t have the faith, the belief that yes, one day you can go, “I did it, I did it, I did it,” then you’re going to fail before you fail.

I could have given up on this ages ago, but I was determined, and I had all the eggs in my, not eggs in my basket, but you know, I really wanted to get this done. And when I get through to the end of this 365 days, Oh wow, what a journey. What a journey. But I tell you, it was so tempting, after a couple, when I looked at myself on video, I was like, “Ooh, ooh, Sam, you really should put a full face on.” Or. And just this stuff went on around, around in my head about it not being good enough that I was like, “Oh, well I only told a few people I was going to do it. I could stop doing it. You know, it doesn’t matter.”

Oh my God, what a failure that would have been. That would have been one of the most massive failures before I failed, ever in my life. And now that we’re 230 odd days in, this is not going to fail. I’m over those obstacles of tiredness and what am I going to talk about and what I look like and where I’m going to be, and different time zones and what are we going to talk about? And all that stuff. I’ve overcome those obstacles and we’re still going.

So that is, to me, this is one of my best examples of me overcoming all of those things that not being the right goal, being distracted, limiting beliefs, not enough faith, and not planning for the obstacles.

So think my lessons for you today on how to not fail before you fail. Okay. Sounds weird. But honestly, when you get to the other side of it, the growth, the experience, resilience, the confidence you’ll have on achieving goals and pushing yourself through from that moment, when you want to stop doing something, when you want to go “Nah, I’m out,” that moment, when you pre fail, you push through that, and all those fabulous things waiting for you on the other side. So today when you’re about to go, “Oh no, I can’t be bothered.” Think about it. Put the voice of Aunty Sammy in your head, and see what you’re going to do. Have a great day. And I will see you tomorrow. Bye.