Not talking about those kinds of situations. I’m talking about things that people say, or do, or that trigger ick, like icky, icky, icky, and I say this, because guess what? I’ve had to deal with it this week. So primarily things that trigger us are, because we feel like something’s not being met like a needs not being met. We’re not feeling satisfied, fulfilled. We’re being let down in some way, something along those lines.

I think there’s one, two, three, four, six kind of things that I think are major kind of areas that we get triggered in. Okay. First one being jealousy, plain old fashioned jealousy. You get triggered, because someone else has sold a million dollars, fallen in love, got married, had a baby written a bestselling book, got tenured clients, whatever. Now none of us want to admit, we get jealous, but we do people. It’s why the word FOMO was invented. So it’s definitely one of them, and you need to do a lot of work to let go of jealousy. I know I have to.

Another one is when your values are being questioned or they’re being negated. So say you have a really, really high value on money and you’re getting triggered, because you’re having a conversation with someone who consistently thinks anybody who has a value that has any way shape that is associated with money, is evil. So you get triggered. Okay? 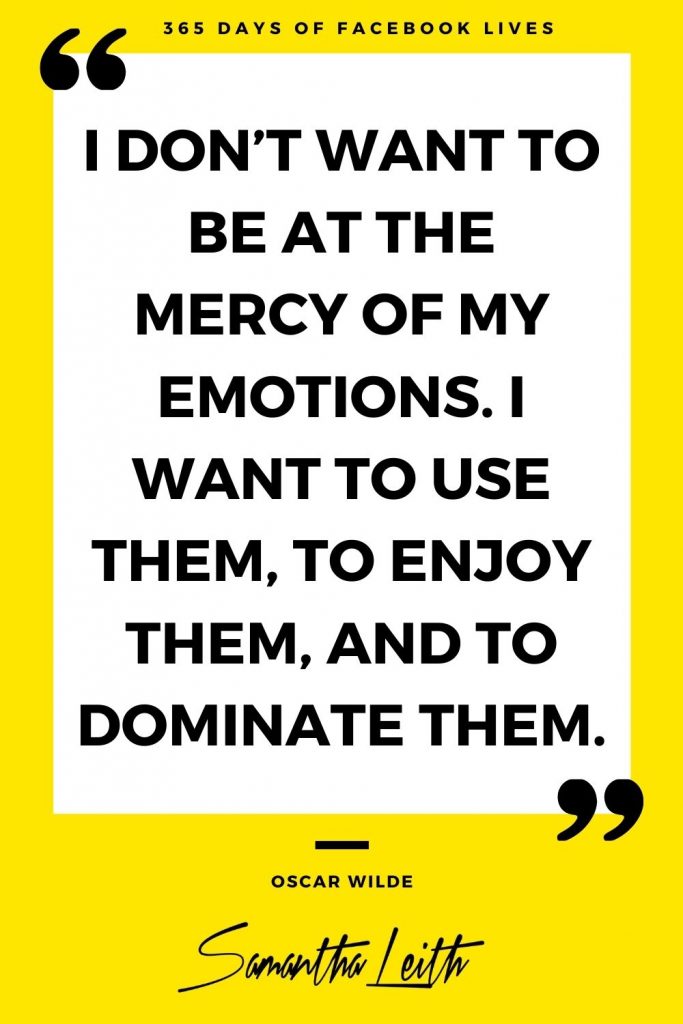 The last one I think triggers us a lot is that when you there’s something you haven’t let go of, so I’m talking about a past hurt, resentment, anger, trauma, that kind of family of things. So something will come up and all that stuff comes back, because it’s associated with that. So they’re kind of I think the key areas that trigger us. Now the first and foremost thing you need to do when you’re triggered by something is take responsibility for the fact that it’s your head is that’s causing the trigger.

It’s not what they’ve done, said, where you are, any of that stuff. It’s your head causing the trigger. So you have to take a hundred percent responsibility for it, and the situation you’re in.

I talked about this the other day. You know how you get to choose that. So this is one of those moves where you could go, “Hmm, yeah. Not feeling like that. Okay. I’m going to insert blah.” You really, really, really want to do that. And then you want to move on, because you don’t want that trigger to stop you in your tracks. If that trigger stops you in your tracks, you’re giving this externally thing power. We don’t want to give away our power, what’s the point in that? That’s not a way to live, okay?

Okay. We need you to identify, list the feelings that come up in that situation. There’s dictionaries of feelings, so there’s a gazillion words that you can come up with and go, “Oh my God, that’s exactly how I feel.” The run it down. Okay. Why don’t we need the negative consequences for what’s just happened and how you’re feeling that’s important. Okay. Really, really, really, really important, because there may actually not be any negative consequences. You’re just kind of making it up, okay.

Then I want you to write down. Do you know why? I can’t read my own writing. Why you had the response? Is it a response you were taught? Okay. So you may have seen a behavior in your mother, for example, when somebody does stuff, and she had a response, and now you’ve learned to have that response and you’re not actually quite sure why you do, and you don’t like it. So it’s about identifying what that is. Okay.

To get an answer on all these questions, really, really help you move on and deal with the things that trigger you. They really, really do. And how are you going to do that? You’re going to journal. Yes. I know old fashioned journal, every single day, people. Gratitude, because although something’s negative, triggered you negatively. There’s a positive for that. There’s a positive for your life at that time, or that moment, or about the learning, or about the person that might’ve triggered you. Okay.

See, flip it, and probably do that tainted towards your love language. Get a support network, if you don’t have a coach, a psychiatrist, or psychologist, a therapist, a best friend, a priest at the confession, not Catholic, but anyway, some people do that. That you can go “blah, blah, blah, blah.” to It all stays in here, and in here, and that’s not healthy. Okay? Really not healthy. So have a support network of people you can actually talk about the shit with.

Big one, when you build your confidence, because the more confident you get the less this stuff bothers you. Okay? So if you haven’t done it sevendayconfidencechallenge.com. I’ll tell you confidence fixes every thing. Another one is I want you to exercise courage. So for example, if it’s a constant person where you have the same kind of triggering thing with, develop the coverup courage to maybe set better boundaries, talk to them about it, not get so involved with them, remove them from your life, but it takes courage to do any of those kinds of things. So you’ve got to work on that.

I want you to develop compassion, another C-word [inaudible 00:08:20] for yourself and the other person, or the situation that triggered you, because I’m telling you again, I’ve said this before, unless they’re complete sociopath or psychopath, people don’t want to hurt you. People don’t want to say that thing that makes you feel like you’re shit. No, people aren’t like that. Well, not the good ones anyway. No, seriously, they’re not.

So develop compassion for them and let it go forgive and forget. Okay. Then I want you to take action. Take action. Once you’ve worked out, what’s triggering you take the action. You need to get over that stuff, or remove yourself from the situation, or the person that keeps triggering you while you work on it. Okay. So there are my tips for dealing with emotional triggers. I hope it helps somebody. If you think it’s going to help somebody, anybody, pass it on, share this video. Day 234, so there’s a hundred and whatever left to go, don’t want to miss any. Bye.