[365 Days of Extraordinary] Day 261 Transcript: How To Stop Being Angry With Yourself

Hi, everybody. Tonight’s live is not brought to you by a ranting, Samantha Mary Leith, talking about the zombie apocalypse and toilet paper, because we have better things to talk about. But yes, if you’re in Australia, it is still ridiculous, like crazy. Concerts being canceled. Yeah. Nope, no more, no more, no more, no more. Tonight I want to talk about how to stop being angry with yourself. So, this has been one of those ugly things that’s reared itself up in my life, from 46 in a couple of months. So, you know, 45 years a long time. And it’s something I deal with probably every single day, I have to look at what I’m being angry with myself about. Now you might not think that because I get over it pretty quickly, and I had these little blips and deal I with it. So, I want to share a bit about how I do that.

So, how do we see this anger? Because anger is one of those emotions that we don’t like to talk about. Shh. Especially chicks, we’re not meant to get angry. That’s why we go to boxing classes, because we’re not meant to get angry. We don’t get taught to express our anger and sure as shit don’t get taught to work out about how we’re feeling angry about ourselves. This is like, it’s not meant to happen. No, no, we don’t do that. It’s not real, but it shows up in all sorts of ways. So, some of the ways it can show up is self-harm, biting fingernails, scratching, picking, doing that kind of thing. Diet is a big way where anger shows up in itself because you like a punishing thing. Same with drugs and alcohol. They kind of go hand-in-hand. Another one can be really punishing work schedules. 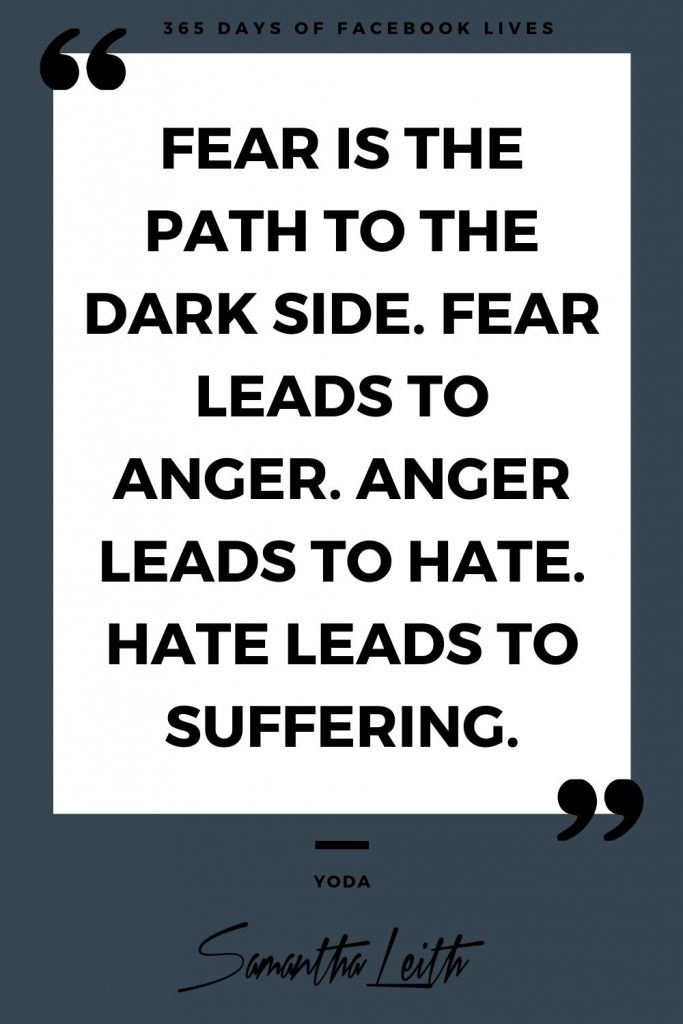 Yes. In fact this one is dedicated to you, Kate. So, the tips I want to give you are … The first and foremost one is, would you be this angry with another person? Like if you’re shitty with yourself about something, if someone else had done that, said that, let you down in the same way, or any of those kind of things, would you be as pissed at them as you are with yourself? And I’ve got to tell you, chances are probably not, because you understand that shit happens.

Sometimes things don’t get done. Sometimes people run late and see [inaudible 00:04:26]. That’s the first thing you’ve got to ask yourself is, “Would you be this angry with someone else?” Okay. Then what I want you to do is I’m going to say it trustee journal. You know, you can buy them on samanthaleith.com. Sounded plug here. Write yourself a letter. What are you angry about? Why are you angry with yourself? What are you thinking? What are you feeling? What’s are all … What have you done? What has made you so evil that you’re angry with yourself, okay? Then I want you to run another letter. And the other letter is like your good angel. I don’t know which one’s meant to … on which side. Bad angel. Bad Sam. Good Sam. And good Sam is writing bad Sam a letter calming her the … down because she knows that stuff happens.

So it’s about the letter back to yourself. It’s about finding the good. Finding the reasoning behind what’s happened. Like really, that letter is to calm you down as you would a best friend if they were saying to you, “I’m so angry with myself, because I said I was going to read five chapters of the book and I’ve only read four chapters of the book, and that means I’m absolutely hopeless.” Now, if a friend said that to you, you’d be like, “Could you maybe read the book tomorrow? It doesn’t seem that big a deal.” Okay? But I want you to calm yourself down with that letter writing. It’s so helpful getting that stuff out, okay? Then I want you to achieve something. No matter how small, just say you’re going to do something. It could be tidying up your desk, could be making dinner, could be getting your nails done, gardening, going to anything. But say you’re going to do something, and get it done, Okay? Great thing to help you get over that anger.

Then want you … Once you’ve looked after yourself and you’ve calm down that anger, I want you to ask yourself a really honest question. Is it actually a really big problem? Is whatever you’re angry about a big problem. Because if it is a big problem, then what you got to do is actually take the steps to fix or change that problem. And that’s too much to go into in this slide. But I have kind of covered off getting steps done to fixing situations before. But I won’t do it again. Who knows? But not tonight. So if it is a big problem, you’ve got to sit down rationally, not with your angry brain and work out what steps you need to take to actually fix the problem.

Now, if it’s not a problem and you have just totally overdramatized it by your evil twin sitting on your shoulder, going, “Ah” then you need to get over it. But you just need to let it go, let it go. I sing that a lot in these lines, don’t I? That’s a very common song with lots of issues. But you do need to let it go. And the step to letting it go is the next bit, which is forgive yourself. Like even if this is a rational … There was a point to being angry with yourself. Like, you know what? You did something stupid and you probably should have been angry with yourself.

You still need to forgive yourself because I’ve said at a live before … And please just go into samanthaleith.com and you can go into the search bar and find forgiveness. And because if you don’t forgive yourself, that is just like this leachy poison. It’s awful. It’s insidious. And it will really, really, really hurt you in life. So massive one you need to do. If it’s a justifiable anger, you must forgive yourself or you will not be able to move on, okay?

And last but not least, do something fun. Because I think if you’ve had all that negative self-talk and that anger and that built-up kind of mankiness … There’s the word for the day, mankiness. Doing something fun let’s that go. Like you’ve done the thought work. You’ve done the writing. You’ve done something to make yourself feel some love, you’ve forgiven yourself if necessary. Now go and have some fun. Now that fun may actually be a boxing class, because I’m going to recommend … Did I write that? No, I didn’t write that. Boxing classes, if you’re at a grump or feeling some anger, is a really good way to get that out. The rush of the pow, pow, and a little bit of the kicking and the … You feel really, really good. I’m going to catch a boxing class tonight. But honestly, do something fun, whatever that means for you, okay?

And last but not least, these are not part of my tips for this, but they’re just the things in general that I talk about until I’m [inaudible 00:09:52] in the face, that if you keep doing on a daily basis, I get to make all these things so much easier to deal with. And what are they? You know what they are, the top five. The top five things Sam says do every day. Coffee. No, that’s not one of them. Honestly, deep breaths. The more energy you’re getting into yourself, the better you are going to feel. Meditation, gratitude, journaling, and exercise. Yep. I never thought that’d be my top five. I would have … In days gone by, my top five would have been cheese, champagne, nightclub, sex and dancing. No, what? Well, I don’t know, I’ll have to think about what my old number five would have been.

Have a great night everybody. Don’t be angry with yourself. No, reverse that. If you’re feeling angry with yourself, it is easy to remove that anger. And you must remove that anger in order to get further and to feel good. We don’t want to feel bad. Really, in general, none of us want to feel bad. Have a great night and I will see you all tomorrow. Bye.