[365 Days of Extraordinary] Day 264 Transcript: Get In Front Of Successful People

It’s like a party going off in my head. Happy Saturday, guys. 264, oh my God, so close. Can’t wait to share the last 100 days with you. They are going to be extraordinary. I’m actually going to ask for your help. Yes. If you like the lives that I’m doing, if you’ve caught any of them and seen them and liked them, please share them, or suggest someone follows my page, or heads over to the Seven Day Confidence Challenge, or just to my website samanthaleith.com, and stay in touch because, honestly, these last 100 days are going to be like… No idea what karate has got to do with it, but anyway, Saturday. I get a bit weird on Saturdays. Today I want to talk about why you should get in front of successful people. Now, what I mean by that? I don’t mean having a cup of coffee with them, but if you can, that’s a great idea or champagne, whatever works for you.

Talking about just getting in front of them, their energy, their… What they say, what they do, and you can do that in all sorts of ways. You can follow them on social. You can read their books. You can get onto their mailing lists. You can do all that kind of stuff. You can buy magazines like this one, which I picked up today. If there’s any publishers watching this, if we could really fix it, so we don’t have to pay $16.50 for a magazine, that would be great, but what was great about this, is my… I’ve always been a believer that you have to get in front of successful people to be successful, and it doesn’t matter what industry, so if you’re a chef, eat at the restaurants with the chefs you admire most, read their books, cook their recipes. If you’re a musician, you should be at a gig three nights a week, following other musicians, and listening to music all the time. 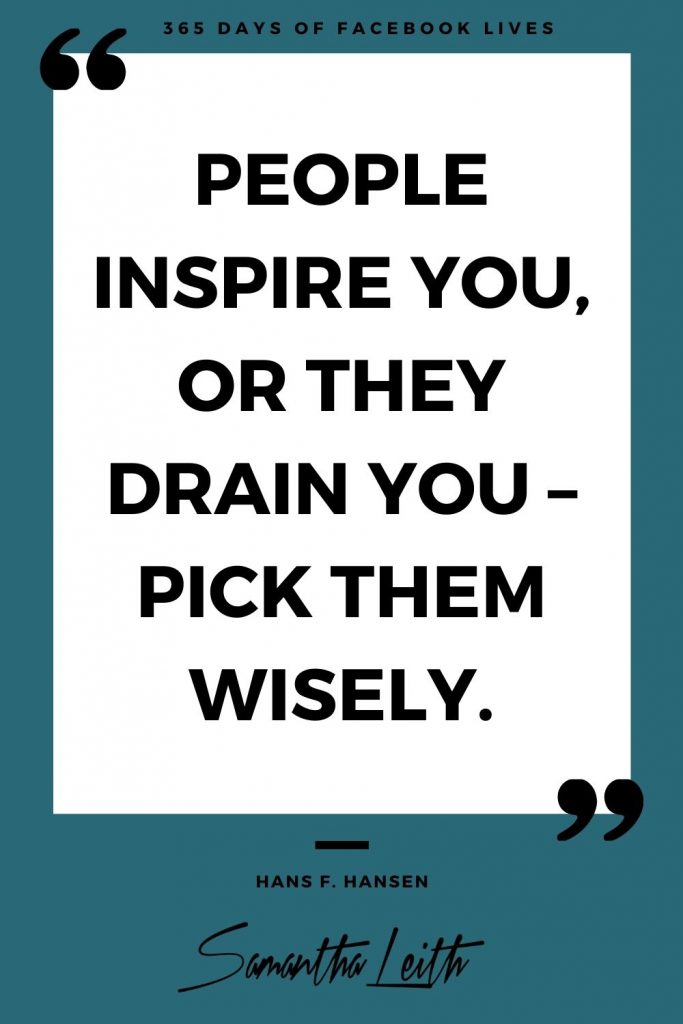 Just getting in there because all that stuff, it seeps into your pores. I truly think success just seeps in, and the more you absorb it, the chances of you getting to where you want to go and what your version of success is going to be is closer. Promise. Pinky promise. What I loved today when I grabbed this magazine… I love the artwork actually, but there’s 12 people on the cover, and you know what? I’ve been in the audience to watch eight… I had to write it down. Eight out of those 12 people. Now, for those of you that are watching in Australia, you know that the majority of these people don’t come to Australia, so that has involved me getting on a plane, going somewhere around the world to see these people. A couple I’ve had the good fortune to see a couple of times. Marie Forleo, for example, I’ve seen her in New York and in Australia, but… So let’s just go through the list.

I’ve seen Gabby Bernstein. Saw her in New York. Tom Bilyeu. I can’t say it properly. Bilyeu. Bilyeu from Impact Theory [and 00:03:21] Quest Nutrition. Amazing speaker. If you’re not following Impact Theory, follow Impact Theory. Saw him in San Diego. Saw Brendon Burchard in San Diego. Saw Marie Forleo, as I said, New York and Sydney. Rachel Hollis, San Diego. Lewis Howes, San Diego. Gary Vaynerchuk, Sydney. Trent Shelton, San Diego. Oh, Jay Shetty, we all know him online. Anyway, you can follow all of these people, anyway. It’s a great magazine. A good read. It’s about this new generation of personal development, which I think are really changing things up. Now, you’re going to listen to me say that and you’re going to go, “But Sam, I can’t afford to go to San Diego to see somebody speak.” And you know what? A lot of the time you can’t.

A lot of the time you don’t have the available cash. A lot of the time you have to use points or wait for sales, or… There’s been cases where I’ve booked a couple of events overseas because the tickets for the events themselves, especially overseas, aren’t actually usually that expensive, and probably you can get tickets to most things for a couple 100 bucks, US, but for us, it’s the getting there that is the real blah. A couple of times I booked things and had to cancel them because I hadn’t been able to make it work, but there’s times that I have been able to make it work, either through buying a ticket or using points, so worthwhile. So worthwhile. They say you should… You know when they do a breakup of what you should do with your money, and you should invest money into a future fund and charity and self blah, blah, blah, blah, Hollis.

There’s some photos going around of Rachel Hollis’s very first RISE event. I think there were like 130 women in the event. It’s about two and a half years ago. Now she does RISE and RISE Business six times a year, eight times a year. I don’t remember how many there is, and they’re three day events, and there’s like 10,000 people in a stadium. Phenomenal rise, and the power of events and the power of being in front of those people has translated to the stuff that the people in the audience are doing if they take action. Don’t be one of those guys that goes to an event… You saw my posts about other events I’ve been to, and how you can make the most of the event when you’re there, but this one, I just wanted to talk about actually getting there, so I just encourage you to do it, and don’t go, “Oh my God. I really want to see these 50 people.”

Pick maybe five people that you would really like to see live, and see what they’re doing, and pick a couple of people that are local that you want to go and see what they do. Could be a branding expert. It could be a dating expert. Could be someone in one of your local businesses that does LinkedIn talks, but chances are, they’re going to be more successful on LinkedIn than you are, so success is in all those levels. You’ve just got to get out there and absorb it, so have a great Saturday night, and I will see you all tomorrow. Tomorrow. I love you tomorrow. Blah, blah, blah, blah, blah. Bye.