Hey everyone happy Sunday night. Going to be quick Q and A today. Because I’m actually not taking a question that anyone’s asked me. I’m taking a question I’ve asked myself and I’m going to challenge you guys to ask yourselves. Guys and girls. So today is international women’s day, and it’s a brilliant day to celebrate awesome achievements of women currently in the world. And in days gone past because oh my golly, gosh, they had some shit to fight for over centuries. And we wouldn’t be voting, we wouldn’t be working, we wouldn’t… Do you know what? We probably wouldn’t have Facebook had women not marched and fought and done everything they could to step up to an equal plate with men on this planet. 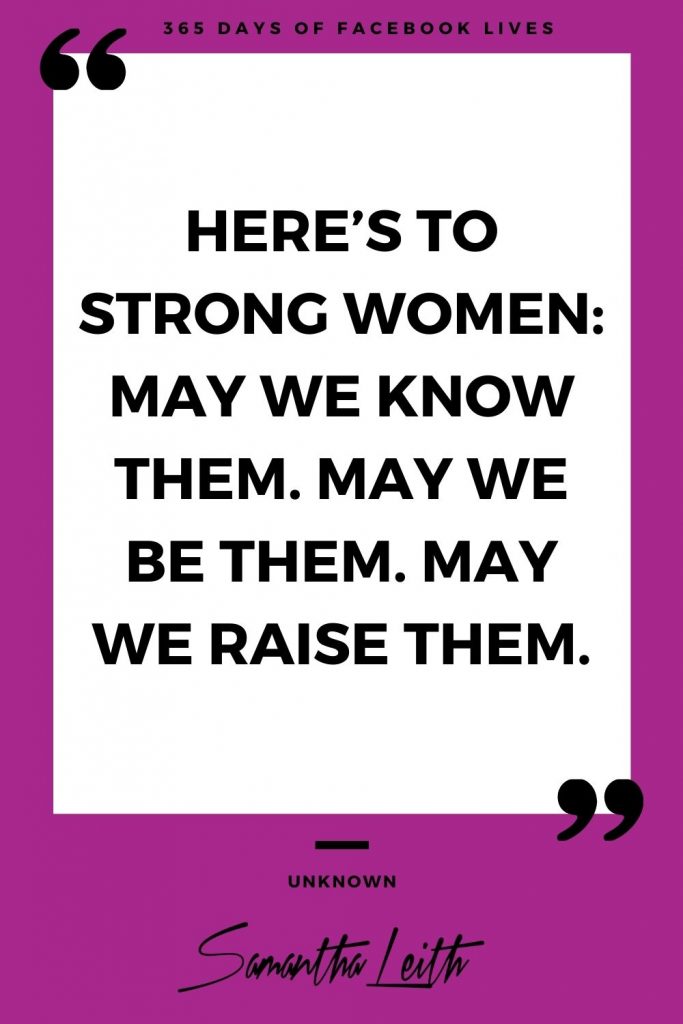 Now the depressing side of that of today… Look there’s Charlie. Same to you, Amanda. Yes, Charlie. I’m talking about girls. She’s a girl. So I’m allowed to do that. Charlie girl. Is that we have to have this day. We’re still so far away from being equal that I hope, I really hope equality’s there for my daughter’s generation, but I don’t know if it’ll be the next generation. I think if anything in the last couple, the last week, especially we’ve seen the world is still such a fractured place when it comes to equality of gender, race, sexuality, any of those things. The ugliness rears it’s head in so many people. Anyway, that’s me digressing from the question I had. So the question I had to myself today was if I could name one thing that I think my mother left for me as the most inspirational thing she taught me or showed me and it was tough. It was really tough. So I know many of you guys watching know [inaudible 00:02:09].

And so, cheese and wine anybody? But the one thing she taught me which I think is perfect for this week is she wouldn’t have put up with any of this shit. She really wouldn’t have. Is my mum taught me everyone was equal. Everybody. It didn’t matter what friends I bought home, what shop we went into, what country we were in, where we were, how much money someone had, what they looked like, what they smelt like, didn’t matter if they were a factory worker or a politician. And my father taught me that as well, actually, but I do specific. Yeah, my mum, if I was going to say anything, anyone that walked through her doors or into her presence was absolutely equal. And I could list 500 things that my mother taught me, but that I think has stuck with me for life and will stick with me for life.

And I know I’ve definitely passed that on to my darling Elody. So I just challenge you. If you can have a think today about the one thing, the one most amazing thing that a really significant woman in your life taught you. A moral or a lesson or a trait that they taught you. They may be here. They may be departed. It might be a relative. It might be a friend. It might be something you read. But quite often I think we tend to look at these days and think about the women, the trail busting women that stood at the back of the bus or burnt their bras or became first prime ministers. Any of those really big groundbreaking, incredible things. But sometimes when we look at those, we forget to look at the chick closest to us. So who’s a woman really, really close to you that taught you or left you something incredibly significant and is an anchor for you for life?

I’d love to hear about her. So happy international women’s day to all of you guys. And can you believe it’s day 265? So are 100 days to go. So I might start singing 99 Facebook lives to go 99 Facebook lives. If one of those… That’s no, I’m not going to do that. But tomorrow I do want to share something really, really exciting with you because I think I’d love some of you to come on a journey with me for the last 90 days of that 100. So I’ll put it in the comments as well tomorrow when I do do it, but I’m so excited. I never would have thought I would get this far. So thank you so much for being part of it. My year of extraordinary. Happy Sunday and happy international women’s day 2020-