I just rolled my chair over my toe and that really hurts. Happy Monday guys. Today I wanted to talk about something that actually, I heard on a podcast, this little phrase. It got me like think, think, think, think, think. And it was the difference between accurate thinking and positive thinking. And I’m kind of taking the idea and, I guess, extrapolating what I think out of it, based on the people I work with and what I’ve had to deal with in my life, what I know other people had to deal with, what we still go through all the time. And I have touched on this before, about the whole honesty with yourself piece. I kind of tied it into that, and also the work. You know I’m a great believer in the work by Byron Katie. So it kind of morphed all of them together. Like a little Sam mashup. That while I’m mixing when I shouldn’t be… I said mashup. Whatever. Anyway.

So, accurate thinking. If something happens to you, like someone hasn’t returned your call and you’re like “They never returned my call”. And you have to ask yourself the question “What was the truth they never returned my call?” So we do that flip around. Well, actually it’s not true they never return my call. They just haven’t lately. I’ll hang on, maybe they’re busy. It’s when you have those kinds of situations and you are looking for the real truth. Looking for the truth in the situation, as opposed to your instant guttural or kind of feeling about the situation. So that’s the accurate thinking. Accurate thinking is also really powerful when it’s in the negative. Say you have a situation where, I don’t know, a customer never pays you on time, never, ever, ever pay you on time. And you think “When they have money, they’ll pay me. I know when they have money they’ll pay you because they’re good people”. So you had put on your Penelope Positive hat, but it’s not accurate. Historically, they don’t pay you one time. So it’s a lose, lose situation. 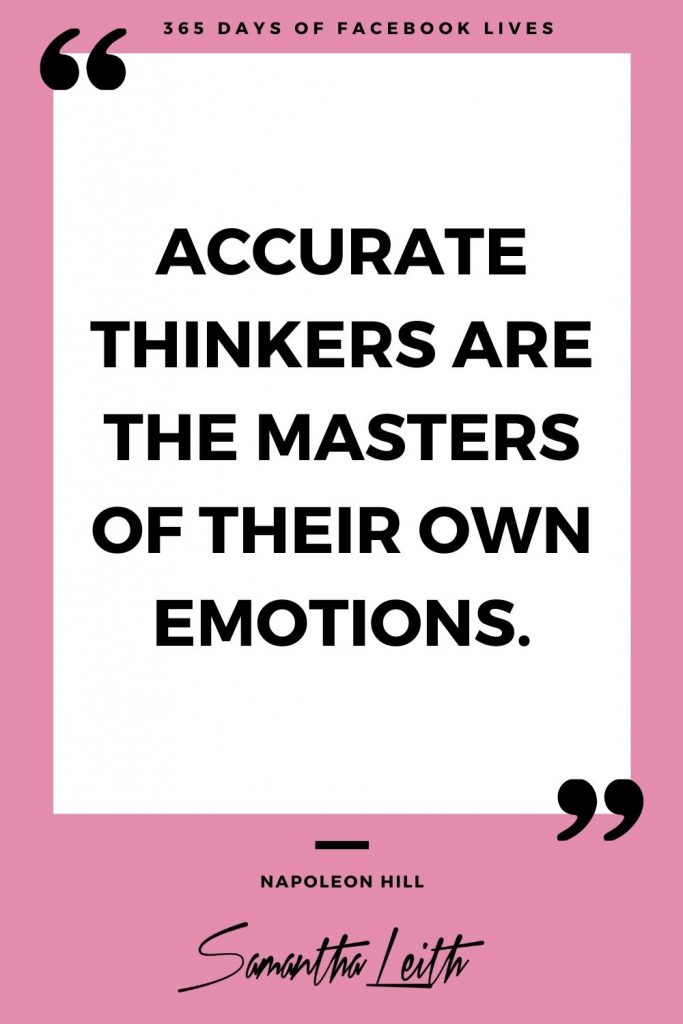 Am I putting a really positive lens on this, or am I putting in a really negative lens on this? Because, the accurate one is the only one you want to go with. Let’s talk about money. So Penelope Positive again, every month she does the credit card juggle because she has great belief that the next thing she sells is really, really going to work and it’s going to fix all the problems and all those money dramas are going to go away. No, Penelope Positive. No, you need to actually be, have accurate thinking about your level of debt and go “Okay, can’t spend that money this month”. Hoping, waiting, believing that that’s going to come in. You need to slow the coach down a little bit. So I’ll change the title of this because it is about the negative accurate and positive thinking. And it’s not about… because again, everybody has their own kind of version of truth.

They should only be one truth, but everybody has their own version of truth. So it’s about, what’s accurate for you in that moment, in a hundred percent honesty about how you feel, what the situation is, what the, what’s the word I’m looking for? The constraints you have, any of the issues you have, because likewise, you can be sitting there going “Oh, no, I can’t go because you know, rent’s due next month and I’ve only got… and I don’t know what to…” and you go into that negative spiral. And the accurate thinking is rent’s due next month. You’ve already saved three quarters of it. If you stay on the trajectory that you’re currently on, you’ll be fine. So yes, the accurate thinking is you can go out. If you want to go out, you don’t need to be nearly negative. So I just want you to think about in every situation, pretend every situation really is like a conversation.

And there’s that conversation that one person thinks they have. There’s the conversation the other person thinks they had. And there’s the words that actually came out in the meal without all the darlings and the ums and the uhs and the connotations and the body language and all the stuff that people mucks up about conversations, all that implied stuff behind the words. So it’s that accurate bit in the middle. And I think we can take that into every aspect of our life. We can look at everything and go, oh, I’ve got my negative lens on, I’ve got, I’ve got my Nellie lens on. I’ve got my Penelope lens on, or I’m being accurate. Amy Accurate. We have to come up with names for these people, I think. Nelly, Penelope and Annie. Yeah, let’s go with Annie. I can be bizarre some days. Sorry about that guys. So I just want you to over the next 24 hours, ask yourself whenever you’re thinking about something, what lens am I looking at this through, positive, negative or accurate?

Because I’m guessing a lot of the time it’s not accurate and thinking negative or positive, too often, doesn’t do you any favors. Okay, but… and I’m going to get messages [inaudible 00:06:25]. I’m not talking about not being positive. I’m talking about looking, looking through things with too positive a lens, so you’re not looking at the truth. Or looking at things through too negative a lens, so you’re not looking at the truth. ‘Cause that’s where the real magic happens. And your base of power for anything is that complete truth space, that honesty space, you know. How much do I earn? How much… you know, all that stuff is… Honesty is the only place you can move forward from. We got to stop fooling ourselves in both ways. So have a great night and I will. Oh, I have one more thing to say.

As you know, I now have 99 Facebook Lives to go, 99 Facebook Lives. If one of the, you know, I did that joke last night, didn’t I? What I want to do is I’m going to really be doing some kick butt stuff for the last 90 days for myself. And I would love it if you wanted to do that with me. So, if you are keen on ending my 365 days of Facebook Lives on the 15th of June, by doing a 90 day group kind of stuff, with me and whomever wants to come and join us, where we’re going to get some goals absolutely nailed in that time.

Do a bit of developed personal development or a bit of business development if we want. Whatever kind of comes up. I know the goals I want to obtain in that, attain in that time. And if I can help anyone else get 20 in that time, it would be fricking awesome. So what I want you to do is you can either DM me, or you can send an email to vip@samanthalee.com and we will get you sorted out in the group for that last 90 days. And here’s a secret, it’s kind of end with a party, but only people involved can come to the party. I’m excited. Bye. Have a great night.