Ironic that I’ve just called this managing overwhelm when I was just having massive issues trying to do a little… I thought I’d do one of those cute little… funny glasses or something. Not me. Okay. So what is overwhelm? Overwhelm is, well, you can either be buried really deeply with mud or soil or water or something. It can be a strong emotional effect on you or it can be complete defeat. So there’s a couple of different things.

Overwhelm is a struggle for very many, many, many of us. What can overwhelm you? Well, your finances, romantic relationships, familial relationships, business, work, children, family, friends, lack of sleep, a death in the family or friends, illness, either yourself or someone else. Many of these things can overwhelm… Can cause overwhelm and then something as simple as your calculator not working sets you often to the deep end. Why?

Because your cortisol’s gone like that and your serotonin’s gone like that and you’re all kind of out of whack. And you can’t cope with things. So some of the things that can happen with massive overwhelm are anxiety can develop. Depression can develop. You can get really grumpy pants and angry. Grumpy pants sounds better than angry though. You can retreat into yourself and avoid the world, which is a big thing for overwhelm. You can also get sick. I tend to when I’m getting overwhelmed, I get tonsillitis. Like it’s a very physical, thing for me. I can see the warning signs, I can start feeling queasy in my tummy and the tonsillitis kicks in. So I’m getting better at dealing with overwhelm. 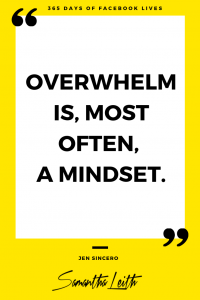 So I wanted to share some of those tricks that I’ve learned over the years on dealing with overwhelm with you and maybe you won’t have to get tonsillitis like I do when it happens. So what do I recommend? Stop. When you’re feeling overwhelmed, stop. Breathe. Breathe, breathe, breathe, breathe, breathe. Grab a journal, write it down. Write down what’s… Putting it on paper can actually sometimes be almost as good. Yes, it can be and in some cases probably can be as good as talking it out with a friend or a therapist or a coach or a mentor. So write it down.

Then I like to say, because I like alliteration, put on your logic leggings. So, logic pants didn’t work. Logic leggings. And look at it honestly. Is what you’re feeling actually true or are you just awfulizing something in your brain. So often we think something is this terrible and by the time we’ve actually written it down, we’re like, what the hell was I thinking about? That is not true. It is absolutely, a hundred percent true that everybody in that party hated me when I walked in. You know? But that overwhelm might’ve made you actually start feeling like that.

Is something else impacting you to make you feel overwhelmed? Like if you’ve been set off into overwhelm, crawling into your bed, avoiding the world because your child did something and it’s actually because of some big issue that happened in your office that you haven’t been able to cope with. The impact from that is setting you off into overwhelm and something else. So it could be something like that. Look at it, investigate that.

Then what can you do to change the situation that you’re in? So if you’re in that really overwhelmed situation, how can you take yourself out of it for a minute? Breathe, breathe, breathe, breathe, look after yourself. Take some action to get yourself out of it. Once you’ve written it down, ask yourself if it was true and worked out what you can do, do what you’ve said would be the thing to help with the overwhelm. It’s not just write it down and it happens. The universe doesn’t work like that people. You’ve actually got to do stuff.

Ask for help. Pick up the phone. Ask a friend, call your coach, write to someone and ask for help. But ask for help. You’re not alone. Nobody’s alone. Okay? Take a break from stressful things is a good thing. So if you’re all worked up about something, get off social media like ugh. Get away from it because that’s probably going to increase your levels because you’re going to go into that comparison thing or they’re doing better. Oh my God. See I told you I was hopeless. Get off social media and look after yourself.

So sleep, eat well, drink less, less multitasking. Yes, I’m talking to myself and say, no. We talk about saying no a lot. It’s saying yes to too much is one of the primary causes of feeling overwhelmed in life. So if anything happens this weekend for you where you’re getting a bit Nancy about something and it’s because you’re overwhelmed and the anger is creeping in, do as I said. Stop, breathe, write it down, ask yourself if it’s true. What can you do to change the situation and take the action? That’s it. Really, really, really, really simple. I should come up for an acronym for that. Stop, breathe, write… It’s going to be a weird word. Have a great Friday night and I will see you all tomorrow night.