Hello. Hey all. Hey, gorgeous people. Hey guys, whatever we want to call ourselves. Hey, survivors of 2020. Let’s go with that. I wanted to touch on today. I was chatting to a friend and they were talking about how they were feeling bad and that was a really bad thing. And Charlie’s decided to join us. Sorry, Charlie. You can’t be in the live darling. So cute though, say hello, Charlie. Hello. Hello. She wants to be Facebook famous.

And they were saying how the feelings were really bad, making them feel really bad and it was all just a terrible thing, so they wanted to shut down their feelings. So it’s prompted me to talk about the fact that feelings can’t actually hurt you. Feelings are feelings. And I know I’ve touched on this before, but I think in times like this, it’s really important to reiterate this. Okay. So if you think something, “Oh look, there’s a mosquito.” And then you start feeling, “Oh, I’m going to get bitten by the mosquito. That’s really annoying. And I’ll feel shitty about getting bitten by the mosquito.” Then that causes the action of you getting up and getting mosquito repellent or slapping the mosquito away or grabbing another gin and tonic and hoping the quinine will help repel the mosquitoes. 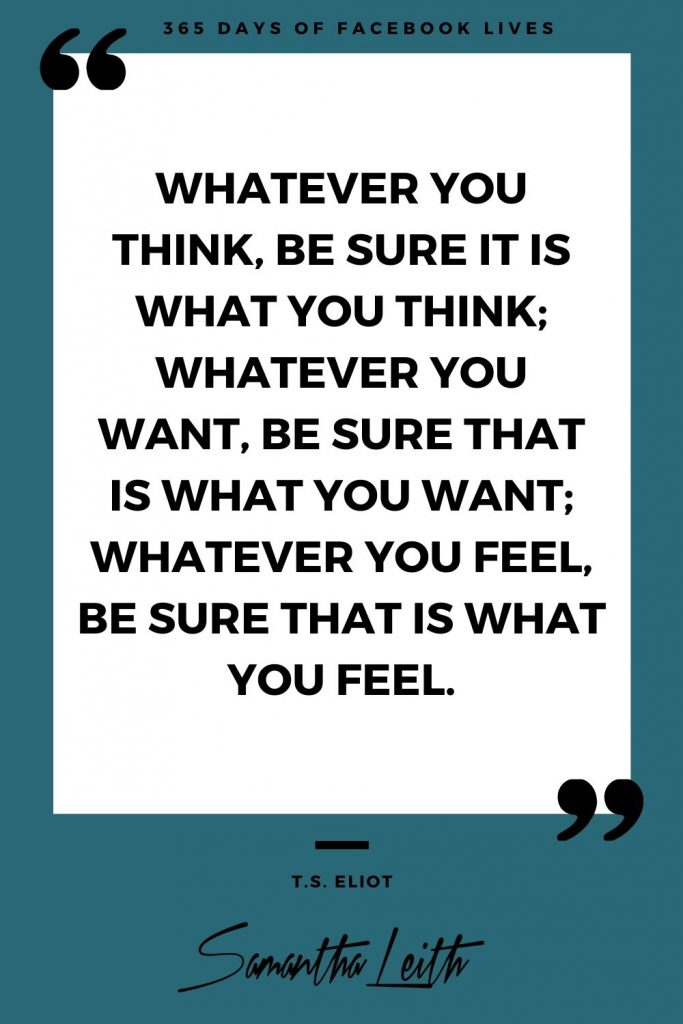 So all that’s caused by the feeling. But if you notice, the feeling actually didn’t do anything. Okay? So we’re fearful. We’re scared of these feelings that we have. Shit, sometimes we’re scared of falling in love because that feelings all, ahh! I can’t control. I can’t control. I can’t control it. But I promise you the feeling actually isn’t doing anything. So even in hard times and happy times and sad times and fearful times, whatever you’re feeling, it’s okay to feel it. There’s a saying, all the feels. All the feels is a really bloody good thing. All the feels gets you in touch with all of it. And once you get in touch with all of it and you have those feelings, and I know at the moment, there’s this spectrum… We’re going to start using the word spectrum in a whole other meaning at the moment.

I’m going to say, pick up your trusty journal and write about how you’re feeling. Share how you’re feeling. Pick up the phone, phone a friend. And if your friend on the other end of the phone is being judgey McJudge pants about your feeling. Well, send me a message because I is no judgment. Honestly, there’ve been people that will contact me in the last few days that think everyone’s being ridiculous. We’ve all lost the plot. I’ve got other people contacting me about conspiracy theories. I’ve got other people contacting me thinking the world’s going to end and other people contacted me thinking we should all just turn off and hibernate until it all goes away. Wide range of feelings and emotions going on with all of this stuff. None of which are bad, because it’s how that particular person is feeling. So they’re all valid. Unless they’re taking action on those feelings which are causing other people harm or causing themselves harm, go for it, feel whatever you want to feel, but just make sure you’re working out why you’re feeling the way you’re feeling. Are you scared of something? Has it brought up something for you?

I got to say, the other day I felt, for the first time in two and a half years, I felt grateful that my mum wasn’t around anymore. And my dad and my brother. They all had so many health issues with them. It’s like I’m glad they’re not here to go through this because that would add another layer of complexity to my life and other people I love’s lives. And that felt weird. I felt angry with myself and I felt, “Oh my God, Samantha, that’s awful. How can you be glad your mother’s not here?” And it was just how I was feeling because she’s okay, she’s not going through this or stuff because she would have been really scared. So I’m glad she doesn’t have to do that.

See, so there was nothing wrong with that feeling. It hasn’t hurt anybody. It’s just at that moment how I was feeling. So I journaled about it and it was about having to take care of her and look after her and another set of responsibilities. And that’s why those feelings came up for me. Nothing bad about it. It’s not a challenge. No challenge today. But I want you to sit with your feelings. I want you to think about how you’re feeling. I want you to write about it, share it, be okay with it. And it’s also okay if those feelings change every five minutes because you know what, our prime minister’s speeches are changing every five minutes.

All jokes aside, honestly, none of those feelings are bad. Get them out, sit with them. It will be okay. And if you’re having any issues, remember my heart, my phone, my Zoom is totally open to all of you guys. Please just touch base. If there’s anything you want to talk about or go through I’m absolutely an open door for anyone at the moment. So much love to all of you and mwah. Good night. Let’s see what crazy Friday brings us tomorrow. Bye.