[365 Days of Extraordinary] Day 289 Transcript: Tips To Being Charismatic On Camera

Hey gang. It is hump day, happy hump day, happy Wednesday. We’re all in the la la land of, “Where are we?” But thank goodness March is over. We are now officially in April. April the first, only April Fool’s joke I heard this morning was little bottle shops were closing as of mid day today in Australia. Which I have to admit, a relative actually texted me and we were like, “No way.” And then were, “Oh, April Fool’s joke.” Yeah, fake news if ever we heard it. Imagine the rush on the bottle shops had they been doing that. I don’t know why… It’s a whole other topic.

Anyway, today I wanted to give you some tips, five tips, count them one, two, three, four, five tips to being more charismatic on camera. And that is a tongue full because many people have actually been asking me, “How do you do it? How do you show up with that presence on camera?” Now, I just need to also point out, I’ve had no media training, I haven’t been to journalists school where they teach you how to stand properly and do that kind of stuff. What I do on camera has come primarily from my performance background. And if you go back through my 289 days of lives, you will see that my presence, how I show up on camera, has changed. I have good days. I have great days. I have bad days. I have fantastic days. I have, “Let’s never repeat them days.” And I have, “Yes, okay days.”

But throughout the journey, I’ve definitely learned that these five things make it better, make me showing up here better. So what are they? Number one, posture. Yes, your posture. Did you know that there’s many radio shows and podcasters, and there’s even some new shows that have people standing up while they do it. So, if you look at some of my videos, when I’m sitting down, I’m not kind of as energetic. I do really try and sometimes I want to be seating to do them, but standing up generally gives me better posture and a better kind of interaction.

So if you see my shoulders are down, my chin is kind of that level. And I move I’m fluid in my posture and my movement. You know from old choir day’s, shoulders, back, boobs out, hips under, that kind of thing. Good posture is really, really important. And if you look at some TV shows even, like E-news, those kind of things, you’d noticed a lot of them when they’re presenting, they stand up because it does give you better posture, or sitting on stools. Sometimes when I record videos for my clients, I sit on a stool so it gives me that link here, that kind of posture, but I’m also sitting down if I might have to read a lot of content or a script or something like that. Okay. 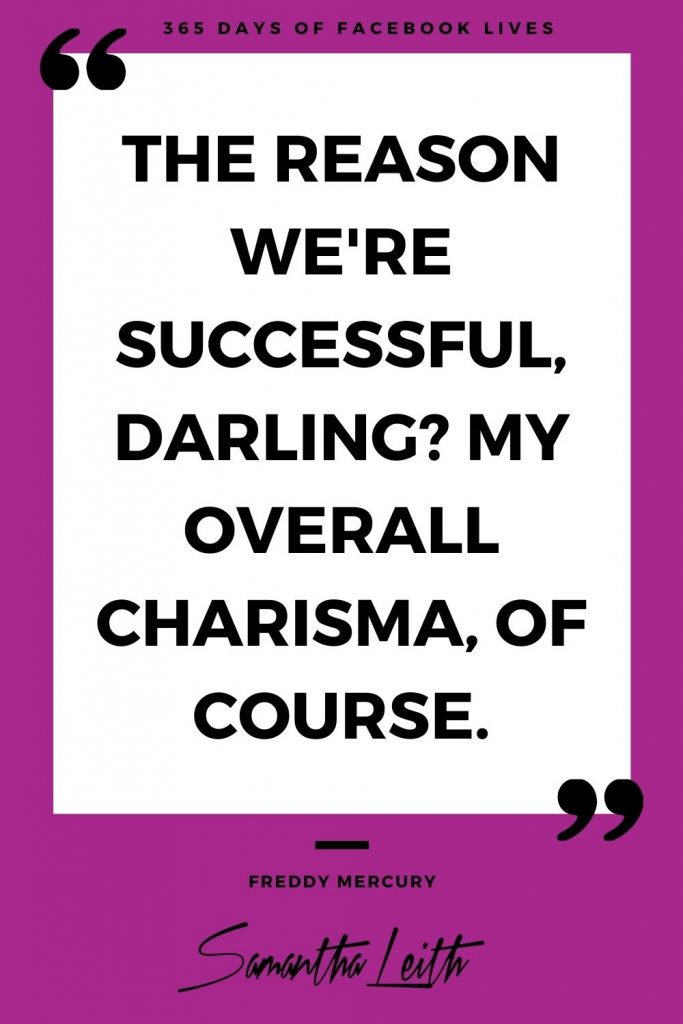 Tip number two of my five tips to being more charismatic on camera is, pretend, pretend to the people. So, I’m pretending right now that I’m just talking to one person. And in my mind, I’m picturing much like when you’re writing sales copy or when you’re writing a presentation for onstage or writing anything like that, you generally write as though you’re talking to your perfect client, your ideal client, your avatar. I do the same when I’m doing my lives. I picture that one person that’s sent me the most comments, or I picture that one person who I think, because of my interactions with them, that what I’m sharing today will be the most beneficial to them. So that’s what I try and do every time I’m on this cameras, So I’m thinking of that one person that’s on the other side of this screen, and I am talking to you. Yeah, talking to you.

Okay. Tip number four is, I don’t like being scripted, I like having points. Now, for anyone who’s known me for a very long time, or known me in any of my singing life, I’m really bad at remembering words. Okay. Really, really bad. So I’m not great at following scripts. I can tend to think of things and I remember the word is something slightly different, or I’m trying to speed read while I read a script. So then I miss a bit. So I’m not great with scripts.

When I’m doing really detailed video work for clients or courses, et cetera, I will have a script and I will use a teleprompter so I can keep that going. But for all of these lives, I’ve never followed a script. I’ve had little points. I might have a few more details that I want to share with you that are actually typed up, but generally it’s points, I just want to get those points across. If you want to work on a script, go for it. But don’t let following a script lose that animation, the passion, the movement, the flow, all that kind of stuff. Okay. Because if I was reading this as a script, sometimes it doesn’t look very engaging and I might not be making you feel very special while I read this script. Yeah, not me, points only.

Speaking of which, this is point number five of my five tips to being more charismatic on camera. So tip number five is, pauses. Now, I’m waiting on this one, it’s up there with patients on something I’m got to get better at. When you’re talking on camera, one of the things about being charismatic is giving the other person you’re engaging with the time to digest what you’re saying, what you’re doing, your body language, your eye contact, the tonality, all of those things so it can make them feel something. So it’s really important to have pauses in what you’re saying.

So, I don’t mean you should say a sentence, and then you should say another one. And then without hoping that people have gotten bored listening to you, you come out with another sentence. That’s not what I’m saying. I’m saying, keep those pauses natural. And one of the ways to do better pauses is to get over your fear of being on camera. So when we’re fearful of being on camera and we’re a bit nervous, which I have to say, I really was in my first few lives. I was like, “What am I doing? Why did I say I’ve been doing this for 365 a days?” I spoke a little bit too fast, or I was like big breaks, kind of waiting, hoping that someone would pop up with a comment or something because I was so nervous.

So there you go. My five tips for being more charismatic on camera. I don’t know why I did the accent. There they are… Can you say them back with me? Posture. Not, “Hi, my name’s Sam and I really want you to look at my live.” Yeah, that’s not going to engage you at all. So posture. Pretend you’re talking to someone. Have passionate! Big one that one. Oh, what was the next one? Points! Got you. And lastly, pauses. Just keep it natural folks.

Thank you for joining me. Next week, might be Friday but I’m going to go with Monday to be safe, I’m actually doing a whole course on how to be more charismatic on camera because all this stuff’s going on at the moment, people are like, “I’ve got to do these Zoom calls and I don’t know how to do them.” And I’ve had the practice so I’d love to help you do that. So if you go over to www.samanthaleith.com, pop your details in the box, it says, “You’ll get the Sparkle Newsletter every week.” Then you will be on the first to know when that course gets released next week. I’m so excited about it! Okay. Love you all and see you tomorrow. Bye.