[365 Days of Extraordinary] Day 29 Transcript: I Like Big Bucks And I Cannot Lie

I like big bucks and I cannot lie. These other fellas can’t deny. Okay. Yep. I want to talk about money. Oh, that light’s bad, isn’t it?

This kind of language and I love big bucks too. I like big … Come on, give it to me girls. I Like big bucks and I cannot lie. Anyway. So I’ve been having conversations with [Elody 00:01:08] and with some of her friends and with my friends actually. I put it like this, to me, money’s a little bit like alcohol. Bear with me. So what alcohol does for a lot of people is it heightens who they are. It breaks down a barrier, so if they’re the funny guy, there’ll be funnier. If they’re the flirty guy, chances are they’ll become a bit of a sleazebag. If they’re the dickhead when they’re drunk, they’re going to be a capital dickhead, like mega, mega, mega dickhead. It’s like this amplification of who they are. And I think money is exactly the same. 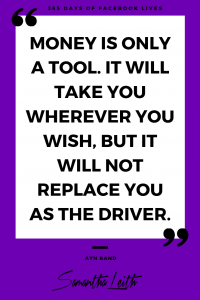 When you look at it, because money’s just a thing. Money’s like these glasses or this calculator, it’s a thing. Money cannot be evil. Money cannot do bad. The person holding the money can do bad. So I think it’s really important conversations to have with our kids about the good and the bad you can do with it.

Today for example, we spent some money, we took an hour-and-a-half drive to have lunch at a friend’s restaurant up on the central coast and then drove back. That to me of sharing love with my friends, showing them another friend’s restaurant, getting good food, that’s a good use of money to me. Okay? Having spending on the couch, getting grumpy pants or buying another lottery ticket so I can be a winner, that would have been a really bad use of money.

But I love experience with money. So when I have money, if I go through phases of feeling a little bit more wealthy, I’ll do things with those money to share that joy. I’ll have a party, I’ll have people over for dinner, I’ll, buying myself something is lower down on my totem pole.

But money to me is very, very inspiring. And I looked at this house yesterday, now the house, I cannot in any way, shape or form afford. If the real estate agent who took my details yesterday is watching this, I seriously came to look at the house. Seriously. Beautiful. That’s the view, people, from the kitchen. Okay, I kid you not, that’s the view for the kitchen. Stunning. Now I walk into that house and I come out of it going, wow, see, if you’re on the right path, if you’re working hard, if you’re working smart, not harder, I should say. If you’re doing something that’s bringing value to other people, you’re going to get rewarded for that handsomely financially. And you get to wake up and have a view like that. That’s so inspiring.
Whereas I know people that have said to me when they know I go and look at houses and things like that. That must be so depressing. Oh, but you can’t afford it. That must be really depressing. No, it’s not. Because again, this proves to me that the people that got the moola are doing, you know, I’m going to go with gut instinct and say they’re good people and they’ve been rewarded for their hard work and what they give to the world and they’ve been rewarded for that financially, so they get places like this. So that’s inspiring.

Some of the flashy, flashy places. Yeah. The people that have had that, maybe, maybe they’re good people with their money, maybe they’re not. That’s not for me to say. But all I will say is, again, it proves money’s a tool. Money’s the thing. Money’s like the dress, money’s the earrings. Money can’t actually do anything. So that house inspired me. I don’t know how much they earn. I don’t know how much the house is going to go for. I’m not even going to find out probably. But what you can get with that money is really inspiring.

But money’s the tool. Money is not doing the thing. Money’s not evil. Money’s not good. So if you have kids especially, and they’re starting to have those conversations with you, really encourage them to look at money as just being this intangible thing that someone does something with. They can get a hundred bucks, they can choose to go to the theater, or they can choose to drink champagne. They can choose to invest it. It’s the person that takes the action with the money, which is what’s important.

That’s all my messages for tonight. I like big bucks and I cannot lie. You all need to do more fun like that. Okay. Have a good night and have a great week.