Happy Wednesday. It’s the middle of the week. It’s hump day. (singing). Anyway, sorry. Got totally sidetracked there, didn’t I? I had to do something today. Actually, I’ve tried to do it over the last few days, which was really hard. And I have a new … You know how I’m sharing lots of videos at the moment of, they look like The Brady Bunch, so the screens where there’s all the different singers doing their bit of different songs. And I’ve been asked to get involved in one with you just have one ear pod in and you’re listening. So you’re recording on your phone or your laptop while you’re listening to the backing track coming from somewhere else. So it’s like this multi things. It’s really hard to do.

So to every muzo whose posts I’m sharing about doing those group choir, choral, the group musical numbers in the split screens, and whoever’s editing them, I bow down. Really, really, really hard to do. I’ve just gone, “You know what? Some of it’s good, some of it’s really bloody awful.” So I just hit send. So I don’t even know if I’ll make the cut, but it was nice to be asked. And some amazing singers in the group doing it. So I might get like a teeny tiny bit. Anyway. Or they might put one of my [inaudible 00:01:27]. 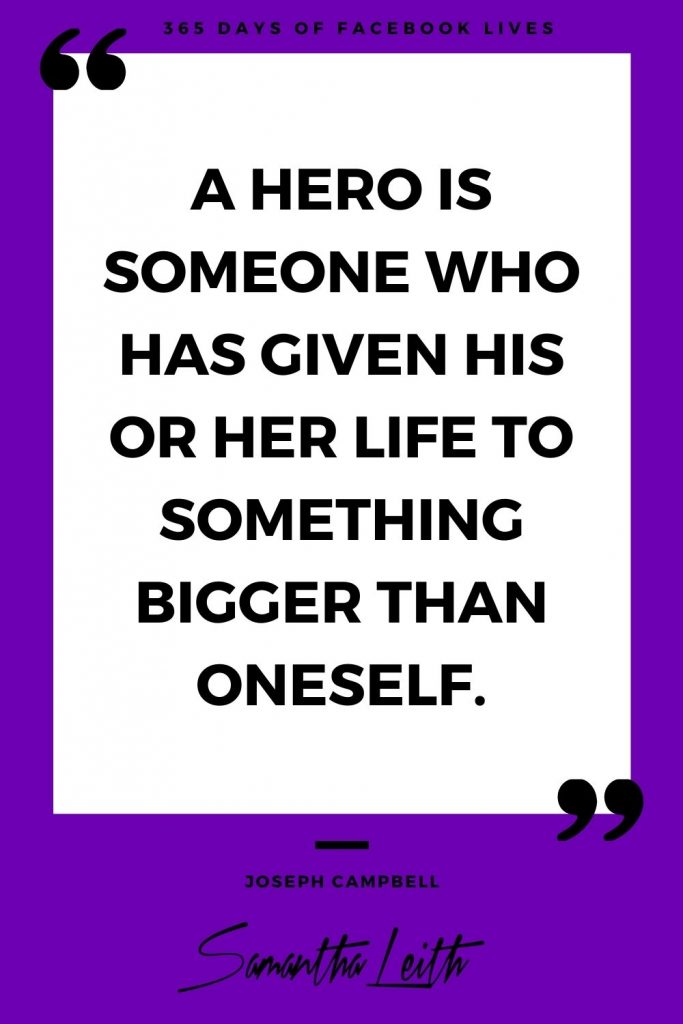 So, totally sidetracked. Tonight I wanted to talk about hero complex. Have you heard about it? So hero complex is not when you put on your super cape, Superman cape and go and save the world, or your Wonder Woman stance, do the power pose before you got to do something. Hero complex is when you’re generally in a work situation. For this point of reference I’m going to talk about work. So when you’re in a work situation and you are … well, you think you’re God, right? So you run around. I was talking to a client about it today. So you’re running around like a blue-ass fly, solving problems, putting out fires, doing absolutely everything because, oh my God, the business wouldn’t survive without you, because you’re it. No one can do the job as good as you can. Nobody can do what needs to get done as well as you can, as quickly as you can, as efficiently, as smartly, as blah blah blah. You truly have a hero complex.

And the irony is your business can’t grow, and you can’t grow as a leader, while you’re stuck with your superhero cape on. It’s impossible. Nobody is irreplaceable. Okay? Nobody. So what great leaders, those without hero complexes do, is support and lead and build others up to shine and to soar and to have their talents just break through, and to have their knowledge and their just everything. They are there to see other people grow to support the vision of the organization.

Now I’ll give you a couple of names of companies that are synonymous. Like I’ll name a company, and just think of one person. Like you’re, “Oh.” Chanel, Coco Chanel. Versace, Gianni Versace. Apple, Steve jobs. Microsoft, Bill Gates. There’s all these people. But, in all of those organizations … Okay, so Bill Gates is still working in Microsoft, but he’s off doing other things as well. At some point those people were probably pretty bloody maniacal leaders, but they had to ditch the hero complex in order to build an organization that could grow. Okay? If they stayed stuck in the, “I’m the only person that could do anything correctly in this business,” attitude, Karl Lagerfeld wouldn’t have taken over at Chanel. We wouldn’t still be wondering what the next Apple product is going to be. We wouldn’t have seen J-Lo wearing that oh my God hot mama green dress from Versace.

If those people had stayed in that hero complex attitude, none of those great things would have happened, because it’s about the team, the organization around them, and people being able to impart their incredible wisdom and their incredible gifts into your organization. Sure, you’re at the masthead of that organization, and you are leading them, and you are guiding them. And it might be, if it’s a business you’ve started, it’s going to be your vision and your mission. You may have a board, you may have a group that have helped you create all that. But if you don’t ditch this hero attitude of you’re the only one that can get stuff done, and you’re the only one with the answers, your business will not grow. Of that I can assure you. And you will have high turnover of staff. Or if you’re in a virtual world working with VAs and things, if you have a hero complex, you’re going to have people there waiting to do stuff for you and you’re not letting them do it. So you need to ditch it. Okay?

So ditch your superhero capes. If you’re thinking, if you’re thinking for a second, “Ah, but da-da-da-da,” just remember what I said. If Coco Chanel thought she was the only person that could do something in that organization, there would not be that bag that I’d really, really like now. Okay? Just remember that. Nobody is a hero within an organization. It takes everybody to make it great. Especially in times, like crisis like this. Yeah. Ditch the hero thing big time. Now is absolutely the time for more supportive, more cohesive work environment. And nobody flapping around like a chook with their head chopped off going, “I’ll do it. I’ll do it. I’ll do it.” If you’re doing the minutia in the business when you’re the leader because you’ve got this hero complex, so much time wasted, so much talent wasted. Don’t do it. Okay. Be a hero in your own life, be a hero to someone you care about, be a hero to those amazing heroes out there that are doing stuff for us at the moment. But don’t try and be a hero in your business. Happy Wednesday, and I’ll see you all tomorrow. Bye.