[365 Days of Extraordinary] Day 303 Transcript: Being Happy For Others Success

Good evening. Happy hump day. Yes, it’s Wednesday, on that crazy week where we’ve all got short weeks and we’re like, “What day is it?” Which isn’t helped by spending a lot more time at home at the moment and not knowing what day it is. Today, I want to just talk about being happy about other people’s success. Crazy topic, I know.

Because, human instincts, we get told, “You got to cheer on the other people. You should be really happy for other people’s success.” And let’s be honest, us human people, nature can sometimes make us get a bit, “Bloody hell, how come they did that so well and we didn’t?” “Can’t believe they got that job and we didn’t get that job.” “Oh my God, look what they did. I’m so hopeless because they did something so much better.”

And that dialogue can start. And on the outside, we’re like, “Oh congratulations.” And we say it with such sincerity, “Really, congratulations.” And inside, we’re like… Honestly, we’ve all been there, done that. But I want to talk about how exciting it is and how great it is when you are genuinely in a place where you are grateful for everything you have. You’re happy with your life, you know that you’re doing what you’re meant to be doing.

And when something good happens for someone else, or you see someone achieve something. When you are actually really, really sincerely happy for that person. Oh my God, it feels different. Like, oh my golly gosh. So I want to encourage you, when you’re just doing the… Because someone’s had something really good happen for them and inside you’re doing that comparison thing, thinking I could have done that better. 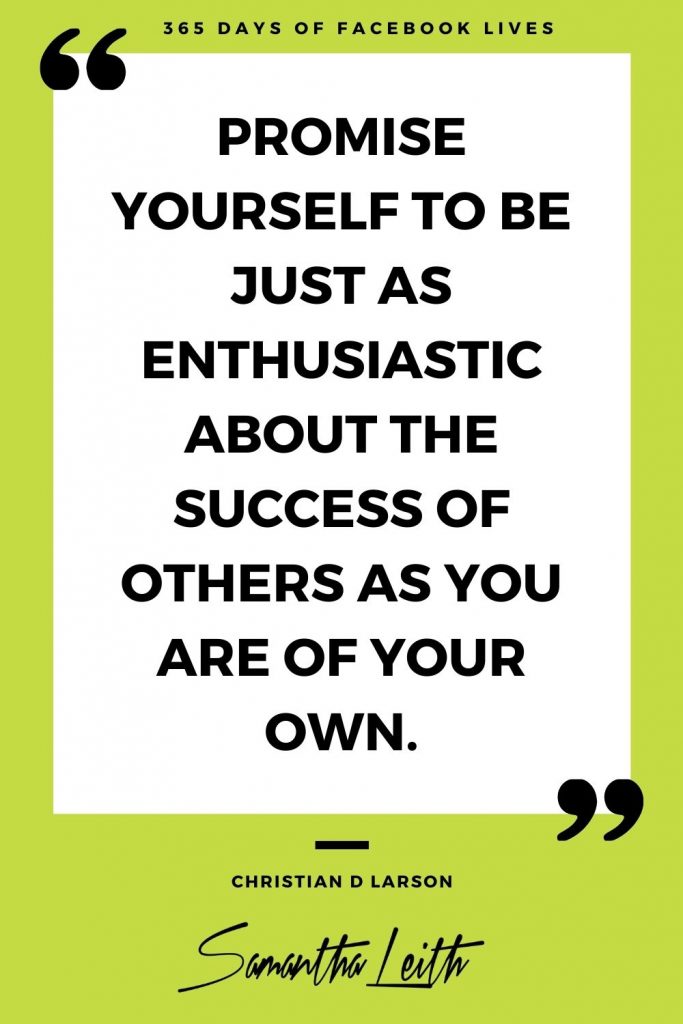 And this stuff, I honestly don’t think for most people, if you’re not a genuine narcissist, most people want to be happy for other people, but it’s their internal dialogue about their failures or their perceived failures or that comparison trap that we go into or that imposter syndrome stuff, that comes up for us, that makes us have that stuff going on.

Even though to the world we’re projecting a “Yay, go you. Yay, go team.” And when you can let go of those voices in your head that go, you could have done that better. Because sometimes it’s, poor me. I can’t believe nothing that good’s ever happened to me. Oh no, nothing ever good happens to me. That dialogue. And sometimes it’s like, what the hell? I could have done that. Standing on my head, dancing backwards in high heels. You get the drift.

So we go to either being, were worse off than them because good stuff doesn’t happen to us. Or we’re so much better than them and that good stuff hasn’t happened to us. And neither of them are actually real. The reality is someone else just achieved something. Unless you were going for the same job. It actually had nothing to do with you.

So, that stuff that you’re feeling is completely irrelevant. You need to put that back in your wheelhouse and work on that and get to that point where you look at any success in anybody else’s life with pure joy. Whether they got a date, they made a million dollars, they lost 50 kilos, they bought the house you really liked. It doesn’t matter what it is. You have to be happy for other people because the moment you are happy for other people, I tell you, it comes back tenfold. Tenfold.

Recently, a friend of mine got a new job. And when I sent a message saying, “I genuinely don’t think I’ve ever been so happy for someone getting something like this.” I meant every word with complete sincerity. The joy was bubbling up, bubbling up. I’ve got friends at the moment doing some amazing lives and shows and putting their stuff out there.

And here’s the interesting thing, I didn’t think I used to say I was happy for someone insincerely. I really didn’t. I thought I was completely sincere when I said it. I wasn’t deliberately faking it, I wasn’t thinking I was faking it, but something’s changed. Something has really changed, where I’m saying to people now, “That’s great you did that.” Or, “Good job, you did that.” Or whatever.

And it’s like, oh my God, it’s so awesome. I’m so happy for people. I sent Eledy a text today, because I got a notification from Facebook, that the post sheet, the live she did the other night, when I wasn’t well was my best performing live all week. And I sent her a message going, “You want a job?” So happy for her. I cheekily said to my best friend, “Oh great. I quit. She can do it.”

But inside, oh my God, I was so, so happy for her. And it feels different. So I want to encourage you over the next couple of weeks. Tomorrow, tonight, whenever anything’s happening in anybody’s life, whether you know them or you don’t know them. Just check your feelings, check your dialogue that’s going on. And when you’re saying, “Great job.” Or anything like that.

What’s happening for you inside when you’re saying that, are you actually being really sincere? Because if you’re not, maybe you don’t say it, say something else. If you genuinely don’t feel it, don’t pretend. And look at why you’re not feeling that happy about it. My pleasure, Peter. Honestly, just to let you know, I’m offering Eledy 10 bucks a live and she can take over the whole rest of the series. What do you think? Don’t please don’t all text me saying that’s a great idea. Then I would start to feel bad.

So yes. Be happy for people. It makes you feel so good. So, so good. Have a great night. I’m off to eat my takeaway from Bar Number Five, subtle plug in there. And then you can go to… Oh, you can check them out on Facebook, Restaurant Number Five, or any of the posts that I’ve tagged them in. Looking forward to my drinks and my cocktail. Happy Wednesday night guys. Bye.