[365 Days of Extraordinary] Day 304 Transcript: I Can I Will Not Tonight

Good evening. Happy Thursday. Yay, we’re nearly at the end of the week. Not that you can tell. So I have something to say. I made an announcement today to a group of people that they could jump online here and watch my live at five o’clock for a very special live. And guess what? It’s not going to happen. Yep. Best misery divorce there. So many of you may know, I spent a lot of the first part of my life, career as a professional singer, and that I think I did my first solo at about five and got first paid when I was seven. Yep, seven years of age. 50 cents to sing a weddings and a dollar to sing at funerals. Not sure what the difference is, but I wouldn’t be able to get a gig now in these times of coronavirus, would I?

So a lot of people have been doing live music, gigs, truckloads of people, dancers doing live dancing, actors are doing Facebook lives, doing acting pieces. Writers are doing reading. Drag Queens are doing drag. There’s a whole host of stuff going on. And a few people have reached out to me and said, “Sam, you know how you do the odd little sing-y bit when you’re dancing in the kitchen and you might just let belt, have a bit of a number? Why don’t you do more of a singing live?” And over the last few days, that’s kind of resonated with me because more and more people have asked. And I don’t do a lot of singing in this kind of environment because I’m not really working singer anymore. I do the odd gig because I love to do them. And I do sing in my keynotes, which is just, I love that. I get to put my two loves together on stage, which is obviously not happening at the moment. 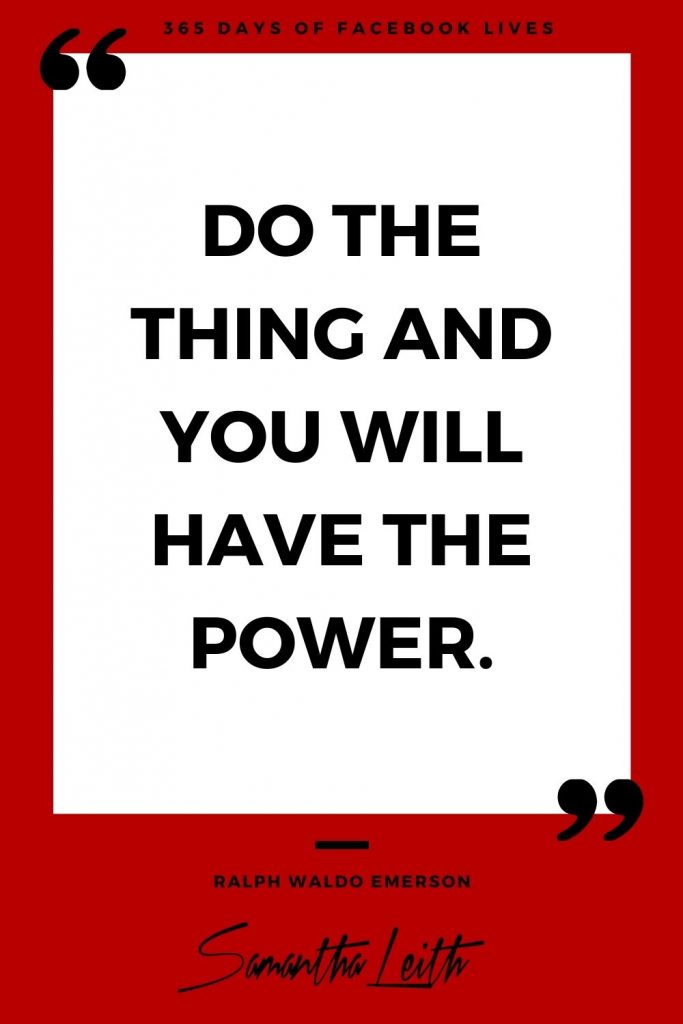 So I was like, “Oh.” I thought about it for a little bit. Thought about it, thought about it. And then this song that I was talking to a friend of mine about really just kind of hit me. And I was like, “Oh yeah. I want to do that song for the community of people that watch my Facebook lives.” It means something to me. I hope it’ll mean something to them. So I’ve been having a bit of a practice because I haven’t sung for ages. And then I just went to do it because I thought, Oh, I could do this. Everybody else’s doing it, I can do it. So I just went to play the backing track while singing live to see how the levels worked, and that kind of thing, because I’ve never really done that on these before. Total stuff up. It was terrible.

So am going to reach out to some of my fabulous musician friends that clearly know a hell of a lot more about this than I do, who are doing these amazing lives all the time. And I’m trying to share lots of them. If I haven’t got around to sharing yours, let me know what it is and I honestly will try and do it because I think it’s really, really important. And where they have they’ve got donate buttons or buy me coffee or a beer button, that kind of thing, because the arts community’s really, really struggling.

That’s not why I’ve wanted to do this piece tonight. I just have been asked. So I thought, yeah, I’ll do my thing and I’ll get something out there which hasn’t worked. So for any of you that know how to do it properly on your phone while you got music over there, please let me know because I feel like a bit of a twit tonight. I don’t like to admit that. No, actually I’m happy to admit that. One of the things you should really, really, really learn in life is to admit when you can’t do something. And it’s okay. There’s a saying, “Done is better than perfect.” It’s a brilliant saying. Done is absolutely better than perfect.

But in this situation, and I was tempted. Actually, Vanessa, you can probably help me. And I was tempted to actually still just do the song even though it was a bit shonky with the delays and stuff. And I thought, no, I can’t actually do that because that’s not how I would show up on a stage. That’s not how I would shop either speaking or singing. That’s not how I show up when I would go into a workshop with anybody. So in those instances, when you’re putting yourself out to do something in that kind of niche, I think I needed to get the tech a bit more better-er, a bit like my ability to speak English. So I’m not even going to say it’s going to be tomorrow night.

I’m sure someone will be able to help me buy then. But some stage over the next couple of days. I will give you a heads up because I will be doing a singing live once I can work out how to get the music sync at the right time. Honestly, Elodie can probably help me. In fact, she’s good at most things so she can probably help me. Ask yourself, you know I like a little bit of an ask yourself on the end of these, ask yourself over the next couple of days, “When do you blurt out I’m going to do X totally unprepared, and then have to backtrack?” And you know what? We all do it. And it’s okay. But in those circumstances, you have to… That’s so funny. Okay. Well, Vanessa we’ll chat and figure out how to do it so neither of us looked like dickheads. How’s that?

When you do say you’re going to do something and you’re unable to do it, own up to it. One of the most powerful things you can do, especially for your confidence, is to own up to your imperfections. And you learn from them and you grow and you’re building those confidence muscles as you do it. So tonight I am imperfectly Samantha Mary Leith, unable to bring you the song that I really wanted to bring you until I figured out how to do it, but I will do that at some stage over the next couple of days and bring it to you.

In the meantime, keep watching these lives. They’re fun. Go online and watch what everybody’s doing. There’s so much joy out there in the world at the moment, and pay attention to those things rather than all the negativity and the dooms days and the conspiracy theories and all that kind of stuff. Stop refreshing world amateurs and go and listen to one of your favorite artists do something live. Everybody’s doing it. Well, everybody’s doing it, birds do it, bees do it. You know how the saying goes. So get on there and support your local artists, or your international artists, because they need to see your love at the moment. Okay? Mwah. Happy Thursday night. Go and have a cocktail on me. Bye.