It’s Friday. It’s Friday, doo doo doo doo doo. Hi guys. You can ask why I’m wearing this on my wrist today, I know you are. I’ll tell you why when I get through this live, because it’s part of it. Okay, I want to talk about guilt. I’ve talked about guilt before in terms of when you’ve stuffed up or you’ve done something bad or in terms of how guilt festers a bit like resentment. So we’ve been there done that, but I wanted to touch on it again today about the guilt that is just redonkulous. The guilt that is just stupid really. And I don’t like that word, but it is just stupid. Guilt is one of the … if not the most useless, useless emotion, there is. There is no point to guilt. No good comes from guilt. Okay? Shit happens. And if you’ve done something bad, you know what? You’ve probably got a bit of a right to feel guilty about doing something really horrific like killing your neighbor’s cat, or like one of those movies where you knock down your grandmother’s ashes off the mantel piece, something like that.

Yeah, you probably should feel a little bit guilty about that. But it doesn’t do any good, it serves absolutely no purpose. I’m talking about when you’re in the modes of, guilt is just your natural instinct. So you do things like say sorry a lot, or you forget about your boundaries and you agree to do things that you don’t really want to do, or you shouldn’t have to do. But you feel guilty because the person said to you … picture this scenario, “But if you don’t come to the party, I won’t be able to go to the party because I’ll be really nervous and I won’t have anybody to talk to.” And you feel guilty, so you go to the party. And you’re miserable, because you don’t want to go to the bloody party. There’s no point.

And then you’re not having a good time at the party and the person that guilted you into going to the party isn’t having a good time because you’re being a misery guts. See? No good from it whatsoever. Now, boys that are watching, sorry, but we trumps you on guilt every single day. Shouldn’t have done that because it’s really not something to be proud of. For some reason, women naturally feel more guilty more often than men do. We have mum guilt, body guilt, food guilt, work guilt, sexual guilt. You don’t even have to be Catholic to have all this guilt pouring out of you all the time, it just happens. Okay? It just happens. My little sticky note fell down, my cheat sheet. Can you see my cheat sheet? Can you read my writing? I can’t even read my writing, I feel guilty about my bad handwriting. 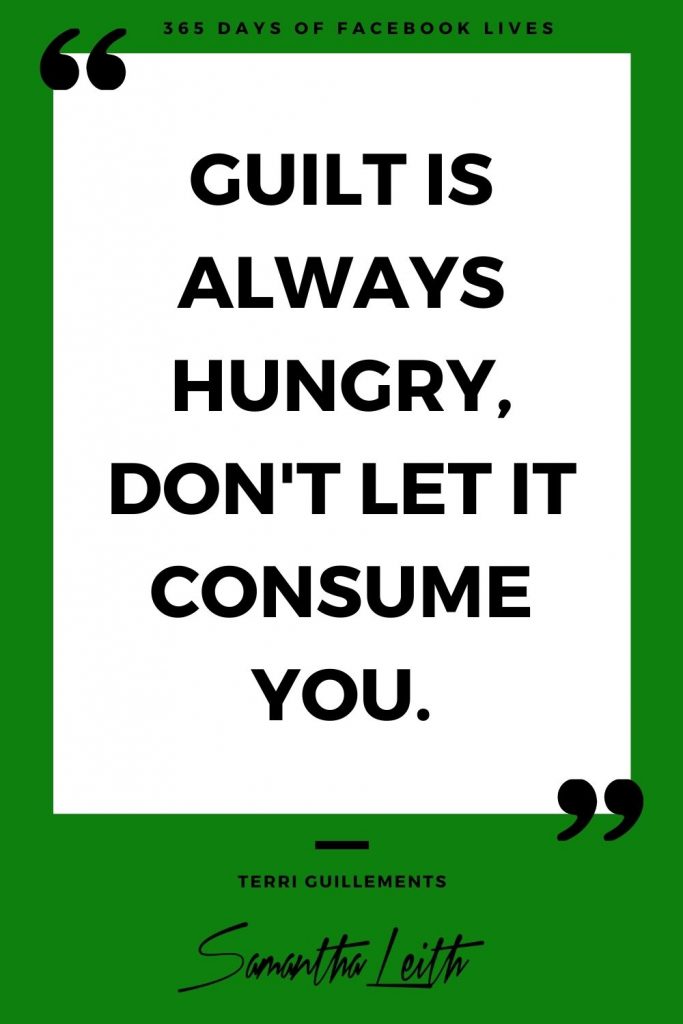 Did you know that? I do. Things I felt guilty about in my times, oh my God, that would be a really, really big list. I’m not so bad at it anymore, but I’m a work in progress. So some of the things we do when we’re feeling guilty or in that zone of having to be better for some reason, because we’re feeling guilty about something. And it can be triggered by something so minuscule that’s said to us, or that we see, or a guttural reaction to us because maybe something didn’t go to plan. So we do things like we overcommit, classic guilty mood, classic guilty move. I will agree to do everything because I feel bad because I didn’t do that one thing. Really? No. Then you feel worse because you’ve over committed and you can’t get it all done. So then you’re apologizing more and then you feel more guilty and it goes around and around and around and around.

The self-blame guilt. That’s a big one. I should’ve got my SNS taken off properly because now I feel really bad. I’m really guilty because I picked my SNS off and now my nails look ugly. And I’m the worst person in the world because I picked my SNS off. What’s the point? I picked my SNS off, I have short nails again. Do I like it? No. Feeling guilty about it is not going to change anything. It’s not going to make me take action, it’s not going to make me feel better, so get rid of it. When people are judgy, Mick judge pants, or they’re blaming people, or like I touched on before, they’re ones that guilt you into doing something. I’m so busy, I can’t get this done, you have to help me. So you put aside everything you need to get done to help them out because you’re feeling guilty because they’re having a bad time. For what? I can’t do it. I have my own work to do.

It’s really hard to do, so I’m not standing on a pedestal here telling you, you have to do this. I’m giving you a little bit of guidance as to how to make a few things better when you are having these moments. Because this is not a quick fix. We do not go from queens of guilt to, I got it in the bag, quickly. Mm-mm (negative). Sorry. If you’re after a quick fix, you need to watch someone else’s live. I don’t do anything quick. Oh no, that’s not true actually. I do lots of things quick, but this isn’t a quick one. One of the things I want to also say is, don’t use guilt as a tool. So if you’re doing things like having to finish a project or you’re having to … or you want to train for a marathon or you want to lose weight or you want to stop biting fingernails, and you try and use guilt as a tool like, I feel so bad I’ve got to get this done, I feel so guilty I didn’t finish off, I’ve got to get it now, I’ve got to get it done.

It doesn’t work as a tool. It can give you a short spurt of an adrenaline hit, a dopamine hit, to make you actually take action for a little bit of time, but it will not last. When you’re trying to fix any of those situations, you need to come to it from a positive angle, not a negative angle. And guilt, there’s nothing positive about guilt. So do not use it as a tool, it does not work, and that I can promise you. Pinky promise. Now, flip side of all of this is, you’re really good at making yourself feel guilty, got that. You take on guilt and you increase the guilt that you’re feeling when other people do things that might make you feel … might trigger the … they can’t make you feel guilty. Sorry, let me correct that.

No one can make you feel anything. You make you feel something. But something has triggered in you to feel guilty by how someone else has acted, that’s that one as well. Neither of these kinds of guilts are going to go away if you’re the kind of person that occasionally says to someone, “Oh, but I’m lonely, please come over. Please, because I’m lonely.” If you say that to someone, you are a guilt machine. So don’t do it. I know this is semi woo woo coming out. You’re putting that out, you’re going to get it back. You make someone feel guilty, someone’s going to make you feel guilty. And then you will keep making yourself more guilty. It will just go round and around and around. It’s like one of those little mice in that little wheel thing. What’s the point? You’re going to get your K’s up. You’re not going to feel any better.

So what can we do about it? When you feel guilty for the next 24 hours, 48 hours, next month, pick a day, do it for an hour, if you’re a guilt machine, because you’ll get bored with it by then. I want you to put something around your wrist. Yeah, I know. It’s so old school, but it works. Every time you’re having that emotion of guilt come up, give yourself that little reminder. Oh, this is … that’s what I’m feeling. Okay. Then ask yourself this question, why am I feeling guilty in this situation? Why? It’s my natural reaction, but why? What’s going on? Second question I want you to ask yourself is, is this guilt reasonable? Again, if you had a deadline of, some big project had to be done by 10:00 AM and you got really drunk the night before, you didn’t turn up to work, didn’t get the project handed in, you probably should feel guilty. That’s a reasonable guilt. It’s a reasonable guilt.

And you can go back and watch one of my lives about forgiveness or have a look on the samanthaleith.com blog. Did you know that the transcripts are there for the lives? And you can actually have a search and look on self forgiveness. So forgive yourself. And then the fourth part of that equation is, what emotion am I choosing to feel instead of guilt? Again, I’ve talked about this before, how we flip emotions. How we can flip something from negative to a positive. So when you’ve had that moment of guilt, ask yourself, why are you feeling guilty? What’s going on? Then ask yourself, is that guilt reasonable? Question number two. Question number … You can’t even see my hand when I’m doing this, it’s hilarious. Question number three, for the people that are watching, is forgive yourself. It takes a bit of time to get used to it because we’re taught to be guilty from like this big, this big. Oh my golly gosh. It’s so inbred in us, it’s unbelievable.