[365 Days of Extraordinary] Day 309 Transcript: You Are Not What You Have Done

Hey gang. Tuesday night. What a day. Fill you in another time. Tonight I wanted to talk a little bit about this notion that we are our mistakes, or we are our successes. Guess what? We are not our mistakes or our successes. We can leave a legacy behind based on those mistakes or those successes, but it’s not the sum of us. So I know I’ve tried to do this quite strictly with Elody, when she’s made a mistake or done something, and even at a little age, and I’m silly or I’m stupid, or those kinds of things, no you’re not. What you did was silly. What you did may have been a little bit on the dumb side. What you did may have been flipping awesome, but it’s still not who you are. And it’s a tough one to get your head around. 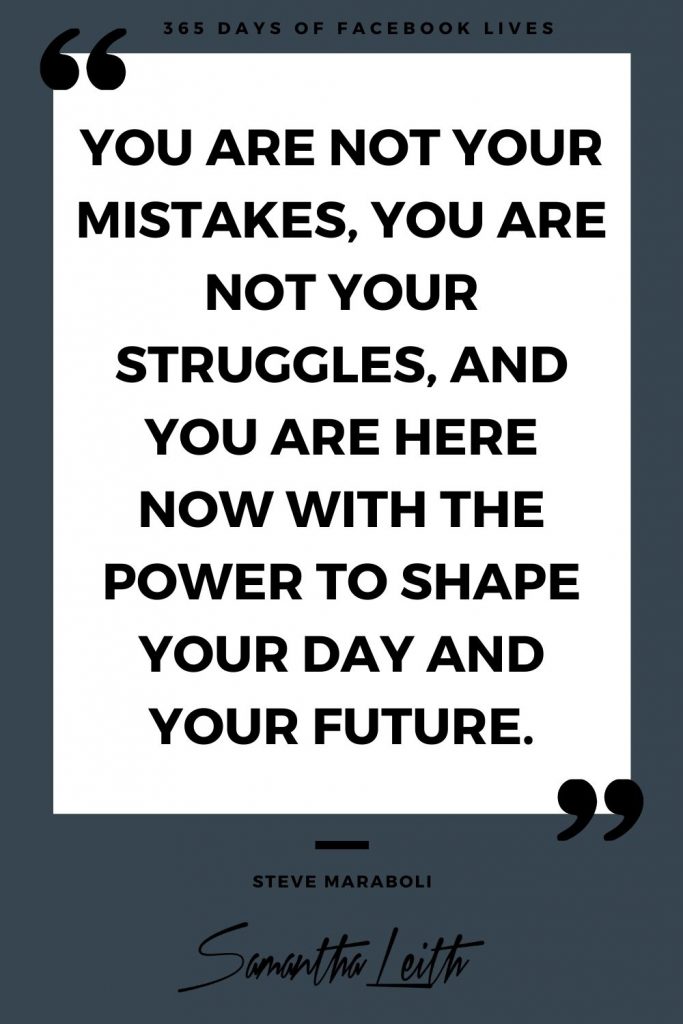 Who you are, apart from skin and bone and that kind of thing, is your soul. It’s your heart. It’s your connection with people. It’s your values. Who you are is made up of so much, but it’s not an act. So I could see stand here and say, “Hi, I’m Samantha Leith. You may me remember me from such blah, blah, blah, blah, blah,” and talk about all these things that I’ve done. Great. I’ve done them, but it means Jack-shit in terms of who I actually am as a person. Does it make me a good person that I once donated something? Okay. That sounded terrible. I’ve donated more than once I promise. But it doesn’t make me a bad person because I didn’t clean my teeth probably a few too many times.

So I want to encourage you to look… when you’re thinking about, especially the negative ones, because they impact us so much more than the positive ones. If you do something really great, it can absolutely give you a boost to your confidence, which I’m all about. But it’s still an act it’s still not actually you, and confidence comes from so much more than an actual act. But when you do something that you talk negatively to yourself or to other people about, that’s really going to impact you… really, really, really. Okay? And if you haven’t paid a bill on time, “Oh my God, I’m so stupid.” No, you’re not. You just didn’t pay the bill on time. Accept the consequences for that. Don’t whinge about it. Pay it on time next time. Set up a direct debit.

Today I had a few things majorly go wrong in my house. A friend texted me and was, “How was your day?” I was, “Okay, so two leaking toilets, leaking washing machine hose, and water all over the kitchen bench from a leaking tap in the sink.” One day. I knew the toilet was happening, but seriously everything. And I was, “Oh God, I knew the toilet had to get fixed. I should have done that.” And I started in this loop of, “I’m so stupid, because I didn’t get the toilet fixed.” No. I’m not stupid because I didn’t get the toilet fix. I’m busy. It’s got nothing to do with it. So today when it all went pear-shaped, got it fixed.

So every time something happens to you, think about it in terms of how it is going to affect your confidence. And if you’re saying to yourself you’re dumb, stupid, naive, silly, boring… any of those negative things… because of an act that you have done or haven’t done, that is not who you are. Keep going back to who you are based on your values, how you care about people, how you communicate, how you feel. All of those warm and fuzzy things, rather than an act. Because an act, positive or negative, does not define you. Happy Tuesday, and I’ll see you all tomorrow for hump day. My humps, my humps… Anyway, can’t sing that… Can we sing that still? I don’t know. Is it politically incorrect? See, I do things that I probably shouldn’t do all the time. Bye.