[365 Days of Extraordinary] Day 310 Transcript: What Happens When You Lose Something

Hey gang. So right now I think … Oh, it’s very dark in here, isn’t it? I think I’m going mad. See, I broke a habit in the last couple of weeks with everything that was going on and I was trying to work really, really, really hard. My house was a wee bit messy, which for those of you that know me personally know that that’s not usually how it goes around. And now, I had a pile of washing. So today, I went to change the linen on my bed and I’ve lost two pillow cases. Now, that may seem silly to you and not that important but I literally think I’m now going mad, like certifiably mad because I’m one of those people that when you do the washing, you fold the sheets together with one pillowcase and then you put both the sheets and the one pillow case in the other pillow case so you don’t lose anything.

And it’s all neat, in the laundry, in the whole cupboard so you know where everything is all the time. You just grab a set and go, “Yeah, yeah, here we go.” Didn’t do it, broke my own habit. What’s happened now? Can’t find the bloody pillowcases. Am I mad? Oh my gosh. It’s been an upsetting me and I spoke to a friend. I was like, “Oh, I can’t stand the mess. I can’t stand the mess.” And look, let’s be honest. It wasn’t catastrophic. It was just messy for me. There was this pile of washing on the couch. Today, this morning, I was like, “Yep. Got to get all of that organized.” Because it’s been sitting there for over 10 days or something. That makes me sound terrible, and I’ve lost these pillow cases. 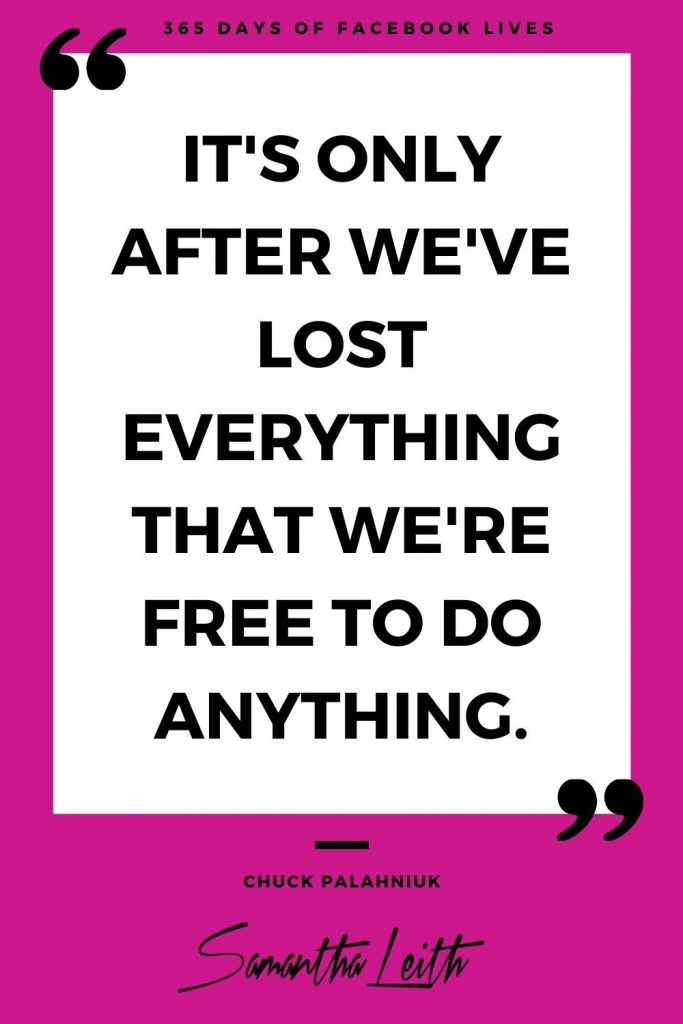 So there’s a reason why we have habits and we stick to them. You do the washing, you put it away because you know you’re organized. Then you don’t doubt yourself. Then you don’t think like I’m thinking right now that I’m gone certifiably insane, because I’m so upset about two pillow cases. I wanted those sheets on my bed and I got to make my bed, but I don’t have those cases. Does that sound really stupid? It’s a little bit stupid but to me, it’s important because I like to come home and I like my house to be fresh and neat and tidy.

And having let it not be like that for a couple of weeks, it’s really kind of worn me down a little bit, I have to confess. So today I was like, “Yes, I want to get all that. I want to be back to some sparkle at home with candles and lots of light and all those pretty things and my bed made with my purple sheets.” And now I can’t have my purple sheets. And you’re all going to think I’m crazy. What is the point of this in terms of my Facebook Live because there’s always got to be a point, right? I’m trying to get good light because I don’t feel like sitting down. No, I don’t speak Spanish. Sorry, Alexis. Sorry. What can I say in Spanish? Agua, cerveza, Coca-Cola. There you go. That’s about it, paella.

So what is the point? I’ll go back to that, is we have these habits that make us feel good. And when we don’t pay attention to those habits because something else is going on in our lives, it sends us off-kilter. And you know the saying that if an airplane … That’s so funny, [Fadah 00:03:21]. I’m like, “Ahh, I just can’t believe it.” If an airplane goes a teeny tiny little bit off its path, like a tiny bit, it’ll eventually end up gazillions of miles away from where it actually should have been and that’s the same with our habits. It’s the same with our personality. It’s the same way that we feel about ourselves. If we’re just that little bit off-kilter, even for like a little bit of time, it can send us into a spiral or it can make us stop doing something.

You know what it’s like when you’ve had a big boozy night and wake up the next morning, your alarm goes off at five and you’re like, “Oh God. No, I’m not doing that.” So you get back to sleep. And then the next day your alarm goes off and you’re like, “Oh, it didn’t kill me not going yesterday so I won’t worry about it today.” And then by day three it’s like, “I haven’t even set the alarm.” And it was just those two days that it took. So all it took for me to feel totally not like myself the last couple of days was my house not being to the standard I like it in. And it now has had all these other ramifications. Even though we’re in the midst of what is chaos in many, many places at the moment around the world, we have to pay attention to that stuff that makes us feel good.

But I’m still on track with my goal sprint, but doing that goal sprint meant I took the eye off the ball of a couple of other things which has had ramifications. So whatever you’re doing, those core things that make you feel good, please, please, please stick to them. Do not take your eye off the ball with that stuff then makes you feel good? Hi, have a great night everybody. And hopefully, I’ll get over my little I’m going mad moment and I will see you all tomorrow. Happy hump day. Bye.