[365 Days of Extraordinary] Day 311 Transcript: The Compound Effect On You!

Good morning. So, last night, I had my little bit of a thing about when you start not following your habits and the things that make you feel good all the time and what the effect of that is. And I thought I’d follow that up today with talking a little bit about the compound effect, but in the other way. So, you’ve all heard about compound interest, that’s when you have a loan or a mortgage or a credit card, and the interest keeps creeping up and it gets compounded on top of that bit, and then it adds onto that bit, and [inaudible 00:00:41]. So, that by the time you get to… If you’re not paying more, that compound interest just blows out. Really be wary of reverse mortgages on that. But that’s a totally separate topic and I’m not a financial person, but it’s just a little aside.

So, the compound effect in life, I’m talking about the little things that you do every day in many, many ways that you might not see a great impact of until quite further down the path. So, if you, for example, every day, do 15 minutes of piano practice… Now, you might have just etched out that 15 minutes and, yeah, it’s nothing. And you listen to yourself playing, and, yeah, whatever, whatever. But you get to the end of a year and it’s like, “Holy guacamole, I can play the piano so much better than I did when I started this practice.” You might be a month in and you’re like, “Oh, I don’t really see the point. I don’t feel I’m much better.” But you keep going and you keep going. And that’s where the magic happens.

So, the same said for reading 10 minutes a day, studying something new, a language, exercise, eating healthy, even the compound effect of just every night, getting that little bit extra sleep. By the time you get to an end of a week where you haven’t had a sleep deficit, you’ll feel so much better. Your mind will be clear. You’ll be able to do more things. You might not wake up in the morning on the day two and go, “Bloody hell, that half an hour didn’t really make much of a difference.” But the time you’ve had that extra half an hour for a whole week, wow. 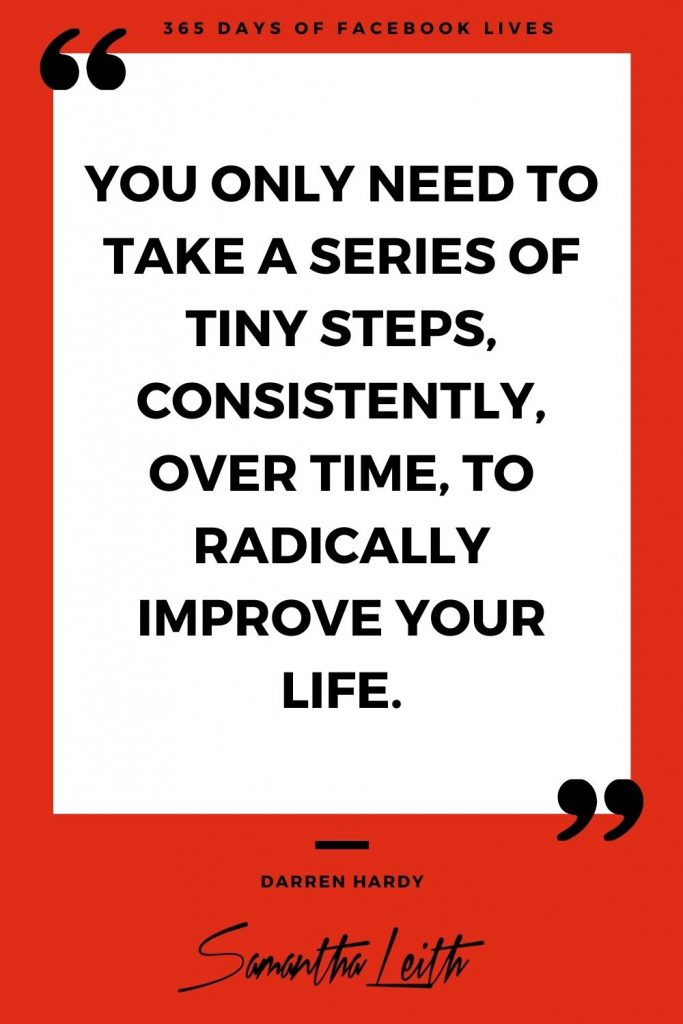 You may not think that that 10 minutes you do every day, reaching out to a couple of people that you’d love to work with, or you’d like to start to know a bit better, couple little emails, couple little text messages, whatever, take your 10 minutes a day, you may think, “Uh. Well, none of them hired me so what’s the point. Six months down the track and you’ve reached out to so many people and one of those people coming back to you and goes, “I remember you mentioned it in that email that you did X, Y, and Z.” Or, “We had this conversation.” The compound effect of everything you do.

Now, I’ve talked about it before, in terms of I have my charts where I mark things off or put little stars on and things like that, because I like that visual aspect. You don’t need to do things like that. There’s apps to do it. You can also just do it. You don’t need a tracking method to do any of these things. And quite often, we get caught up in the, “Oh, I’m not going to really improve myself or my productivity if I don’t follow the right productivity planner. And I’m not going to get my goals if I don’t have a goal thing that I write on every day or I mark off or I do this, I track.” The tool is not actually what does it. You’re the one that does it. Some of us like tools. There are lots of people that are incredibly successful, they can’t stand the idea of using any of those tools. They just have their rhythm going.

When I was a teenager and I was singing a lot… I was in the Australian Opera. And I would do, with school and with everything else, I would do two hours singing every single day, come hell or high water. I would sit at the piano in the morning and I would do warm ups. I’d do little exercises. I may be sing a couple of songs, but generally that was just warming up kind of stuff. And in the afternoon, I’d practice songs and do all those things every single day, every single day. The compound effect of me, over time, with that was a bigger range, better breath control, better tonality, all sorts of things. Did I see it after a day of doing it? Hell no, after a day of doing it I wanted to be out hanging with my friends rather than sitting in a bloody piano for two hours. Considering I can’t play the piano very well, it was torture.

Week three, I believe is two minutes of running. So, had I started that two minutes of running on day one, yeah, I don’t want to do that. It would have hurt. And I would have not done anymore. I mean, like, uh-uh, this is not fun. But because it’s building me up, that compound effect is taking place and getting me to be a… I don’t know if I’ll ever be a runner. But that compound effect is getting me to the point where I can do it so much easier, without noticing the impact.

So, think about anything you want to learn, anything you want to do, anything you want to get better at, whether it’s sleep, social media, a language, reading, writing content for your business, finding a friend. The compound effect of reaching out to one friend every single day, especially during this time, you will feel so much connection within 30 days. I promise you. So, look in your life today, and I want you to think of one thing, just one thing, that you could start getting a little bit more off every single day and see how that compound effect helps you and takes you to the next level in whatever it is you’re trying to go for.

Thank you for watching this morning. I will see you all tomorrow. And don’t forget newsletter goes out on Friday so if you want to see The Weekly Sparkle, head on over to samanthaleith.com. I forgot my name there. And join in. Sign up for the newsletter and you’ll see all the fun stuff that we do. Have a great day guys. Bye.