Oh, it’s a wee bit chilly tonight. Monday, another start of a new week. Thanks to all those teachers that went back today to start all the pupil free stuff. And then our kids are going to start back at school on Wednesday. Which is not physically at school, but learning at home, which is great.

But what about courage? So courage is one of those things that… Obviously, courage, fear, they go hand in hand. If you’re feeling really fearful, sometimes it can take extraordinary efforts to come out of that fear and into a courageous momentum. It can take huge amounts of work. As we learned the other day on the emotional scale, you can go up a little bit at a time. 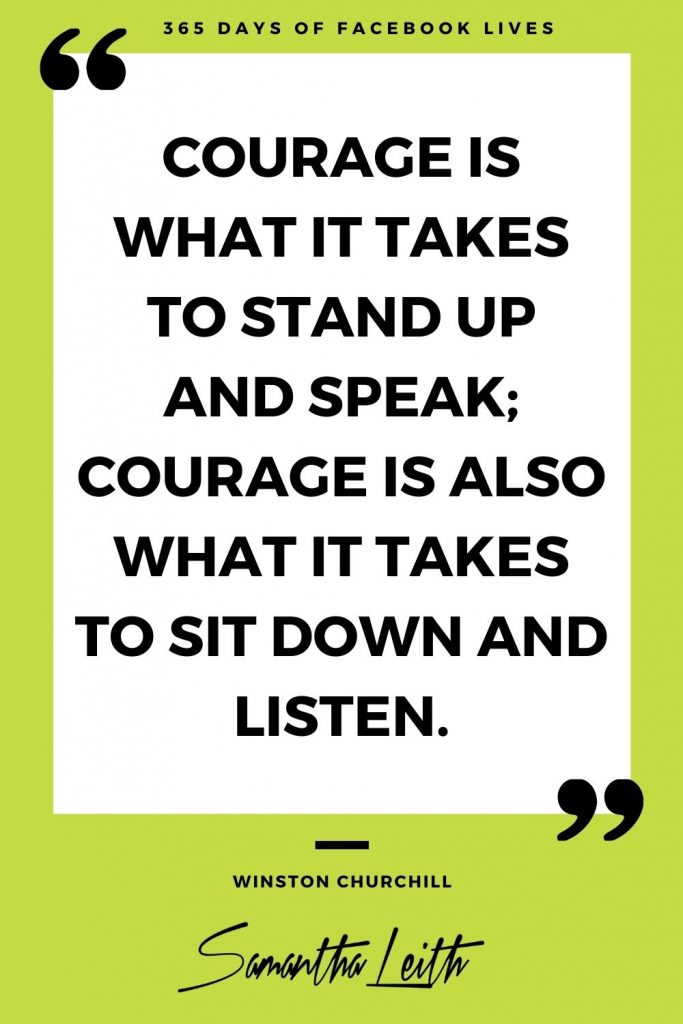 But how about if you could have a little bit of courage rub off on you? Well, you can. It may sound silly, but I promise it really is true. Think about the people you hang around with, how many of them are courageous? I’m not talking those people that hold their breath and go, thousands and thousands of miles under the ocean. Okay. No one goes that far, but you know what I mean. Not the deep sea divers, not the people that are bungee jumping naked off the Eiffel Tower. I’m not talking those kinds of levels of courageous.

I’m talking about the people that they might see someone across a crowded bar and go and chat them up. I’m talking about the people that might be, yeah, unhappy with their jobs, so they spend a little bit of time either on a side hustle or just putting their feelers out. Getting LinkedIn up and running, putting the feelers out and seeing what jobs are out there. I’m talking about the kind of courage that means someone who has grown up all their life eating meat and three veg goes, “You know what? I’m going to try this vegan thing.” Those kinds of courageous acts. Because like confidence, when you do little courageous act, it builds the muscle of courage. I know, same thing. Who would have thought?

So who are you hanging around that does things courageously? Because if you’re feeling stuck and you can’t give something a go and it’s all just a bit too much. If you’ve got people around you that are tempting you because they, like me, doing couch to 5k. Bloody courageous. Week three, by the way people, loving it. Trying new things. Someone at home at the moment in all this chaos that is going on around us, is learning a new language. They’re acting with courage. Who do you know in your life that’s being courageous at the moment, and has been historically that you can kind of hang around a little bit more? Because if you’re hanging around people that are not willing to give things a go, you’re less likely to give anything a go. It’s so, so, so true.

So question this week, and I’m not saying if there’s people are in your life are, like, “Oh, no, I couldn’t do that. Scary.” That you call them and go, “Sorry. You’re not courageous enough. Bye.” No, not that kind of thing. But I’m just talking about being aware of the people that you can hang around. If courage is an issue for you, that fear-courage split is an issue for you. I want to just encourage you to try and spend some more time with people that are that little bit courageous and just let it seep into your pores a little bit and see how you go. Let me know how you go.

And can you believe it? Today is Day 315. Do you know what that means? I only have 50 days to go and I’ve done 365 days of Facebook lives. Which was a really bloody courageous thing for me to do because I was so fearful of turning up on camera without my hair all done, and my makeup all done and a great script or a great song or an outfit or any of that kind of stuff. I thought I was going to look like an idiot. And you know what? I have loved every moment of it. And since doing this, it’s led me to do more and more courageous things because it does rub off on you. It is a muscle that you can build just like confidence.

So if you want any more information, head on over to the interwebs. Well, you’re probably already there, because you’re on Facebook. And go samanthaleith.com and sign up for a weekly dose of sparkle. Night, guys. I will see you all tomorrow. Bye.