[365 Days of Extraordinary] Day 316 Transcript: Pushing Goals Too Much

Hey guys, gang, gals, everybody, the whole world, kit and caboodle. You know that Salt-N-Pepa song Push It? Push it real good. Okay, well when it comes to goal setting, push it real good could sometimes bite you in the ass. I am a recovering goal pusher. So what does that mean? It means you get kind of control freakish, pushy, to-do list-ish about any goals you’re working on. So I mean like that really over the top kind of… Oh, I hate admitting this, I really hate admitting it up, but it’s so true. You’ve got the ticks, and I did this, and it’s all this army kind of, and regimented I should say, because I’ve never been in the armed forces. But remember those movies where it’s left, right, left, right, left? When you’re doing goals in that kind of momentum, sometimes you can actually repel them. Yes, I know, weird hey?

So the more, if you’re in that pushy angsty kind of energy while you’re trying to, “Go for gold,” as I say, sometimes it’s like two magnets and it’s repelling and you’re never going to get to that goal. So let me give you an example. I think I re-edited my showreel, sizzle reel, whatever you want to call it, in terms of speaking and singing, in November last year. And I had to get it done by a certain date. I wanted it edited by this date, [inaudible 00:00:01:44]. Because I was going to do this with it and this was it. And this lists and all this stuff. Push, push, push, push, push. 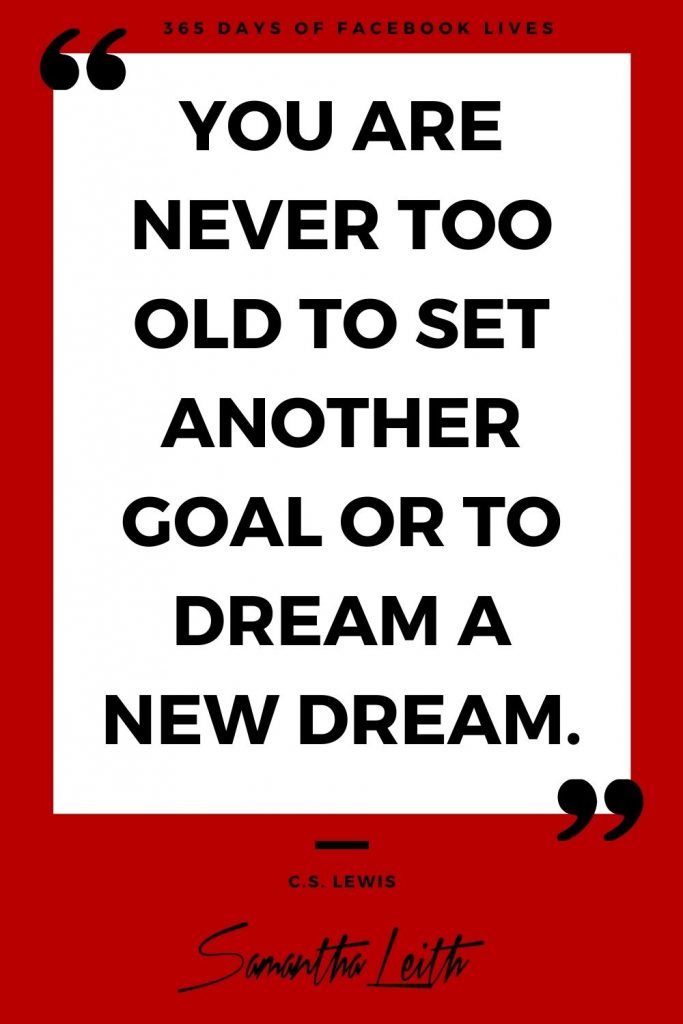 And you know what? Apart from few people I’ve had to send it out to, and it’s been up on my website, I’ve done buggerall with it. And I cannot tell you on how many lists it is said, “Publish showreel on Facebook.” Not that hard. But the energy behind me wanting to do it was all, got to get it done because I’m going to do this, got to get it done, got to get it done. So of course I didn’t do it. What happened today? I was like, “Oh yeah, I should probably put that up now.” Publish. Two seconds, people. Not hard, really not hard. Hit publish, it’s there. Miraculous. No drama, no struggle, no ridiculous amount of drive.

So why am I telling you this tale, and why am I encouraging you not to push too hard on some goals? Because go back to way back in the beginning of when I started doing these lives, and I talk to you a lot about goal setting and how we reach them, is sometimes we have these goals that are so external to us. So, for me, that one about the video was if I put that online then these people will see it and these people will see it, and it’ll mean extra gigs and [inaudible 00:03:06]. And I had all this extra angsty energy about what one video could do for me. So of course I didn’t achieve the goal, because I didn’t really give a toss whether I’d put that video up on Facebook or not. To me, I done it, that was great. I was really happy with my new showreel. I was really happy with the footage we’d found, the stuff that we’d put together, the theme, all that kind of stuff. But yeah, whatever, if it was on Facebook it was on Facebook. There was no real driver for me.

So when you’re pushing goals for those reasons, they ain’t ever going to happen. Going back to, you know what I’m going to say, asking yourself those questions about whether the goal is something you really want or something you think you have to have, or something that other people think you should have or should do, and then look about how the energy… I’ve been [woo-woo 00:04:05] this week, have I? Stick with me, people, that analytical woo-woo thing happening. The energy that you put into the goals really does attract or repel them, it really does. Pick any book on my bookcase and someone’s going to tell you a little bit about how your feeling about goals as to whether they actually work out.

And if you’re working towards a goal with that really aggressive pushy nature, you’re either going to collapse in a heap by the time you’ve achieved the goal, or you won’t achieve it. It’s just not good for you. And if anything, all this stuff that’s going on at the moment around the world with COVID, is making us kind of appreciate and sit back a little more and go, “This is working for me because,” or “This feels good,” or “This doesn’t feel good.” You know what? I haven’t missed seeing those people at all. So maybe they weren’t meant for me, all those things. Be a bit gentler in your goal setting. And that’s hard for me to say as a recovering goal pusher, okay. But I swear it’s method in it, and it works.

So when you’re looking at your goals that you’ve written down today in your journal or tomorrow in your journal, ask yourself about the energy that you’re putting into those goals, and see if you can maybe tweak it a little bit, be a bit kinder to yourself. Maybe not even go for it, if it’s not really meant to be. Or take your pedal off the metal and flow into it a little bit better. Have a great day, guys, and I will see you all on the morrow. Hump day tomorrow. Bye.