Evening all. Tonight, I want to talk about the tall poppy syndrome. So, it’s a very Aussie thing. Kiwis, there’s a few countries around the world that do it. There’s people everywhere that actually do it, but it does tend to be an incredibly Aussie thing to do. Where someone gets to a certain level of success, or notoriety, or wealth, and we just want to like pick, pick, pick, pick, come down to our size. And I think we get taught this from a really, really, really young age, we go from those moments where there’s small kids and they’re so excited for their teammates, or their friends to win an award, or get up on a podium, or to have an acceptance speech, or even have that take that toy that they get to take home that weekend from year one because of their good behavior.

And then as we get older and “wiser” we stop doing that. We stop enjoying other people’s success. We want to find fault. We want to go, “Oh, well, yeah, but she’s only that famous because she got all that money from her father.” Or we want to say, “Oh yeah, but you know, auto tune does wonders for her songs.” There’s always a something. And I want to encourage us to go through life, forgetting the somethings. The more we can be happy for anybody’s success, at any level, the more other people are going to be happy for our success, number A. And the more success we’re actually going to have, you can’t be negative and get a positive. It’s like a universal impossibility. Sure, you might have a small win, or you might have a little ego hit because you’ve brought someone down a peg or two by gossiping about them, or finding, or picking on something they’ve done, or making some notation about how they’re clearly not that great anyway. 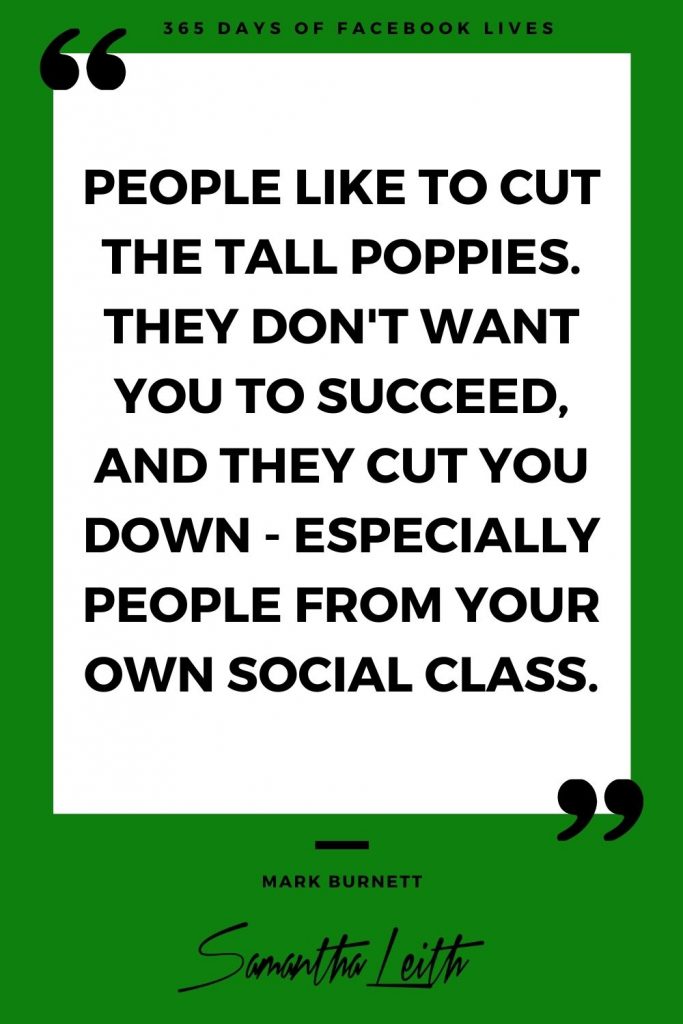 Why, why, why, why, why, why? I don’t know why we do it. It’s interesting. Someone’s just jumped on line. “Hi, Shanna.” And we were at school together. And when I was at school, I was teased incessantly, not by the young lady watching tonight, I might add, about my singing. I’d go into classrooms and someone had teased me, or someone will make a joke because I was doing this. And it was just because I was different. I was doing something that my friends in my class, my comrades, my people weren’t sharing in. So, therefore I had to knock out a wedge so I could, not even come back to their level, because that’s not what it’s about. It’s about you just not … Them not seeing you at some perceived higher level, because the reality is none of it’s … The reality is ironic for them, I’m going to use the word, none of it’s real. It’s not, we’re all the same.

Whether it’s me, or Celeste Baba, or Oprah, or Bono, we’re all just people. Sure we have different talents. We have different gifts. We have different skills. We have different personalities, but we’re all just this genetic makeup. And no good comes of living in a world where we do “tall poppy syndrome.” You might get a teeny tiny buzz, your ego might get this little kind of ping because for that moment, you feel a little bit better than someone, or you feel that you might not feel better than them, but you don’t feel that they’re as good as they were. That ego boost is gone in like microseconds. So not worth it. We have whole industries in the world built off the back of tall poppy syndrome. How many magazines do you pick? If you pick up four magazines, I guarantee three of those magazines will be filled with negative things, meant to knock chinks in people’s armor. To make them somehow seem smaller.

The reality is, the bigger we lift people up, the bigger we are. So I just want you to watch your language, watch how you think about people. Watch what you … When you’re picking up a magazine, or see something on the TV, the news, a movie, whatever it is you’re doing, and you see someone and you have those seconds where you’re like, “Hmm, yeah, but you know, well, she wouldn’t be that successful if she wasn’t married to him.” Stop it, please, please, please stop it.

Ask yourself if you were on a pedestal, what would you want people to be saying about you? Hmm, that’s a biggie. And look out for that over the next 24, 48 hours. Just pay attention, okay. Because, they’re all just the same. They’re all the same as you and me. So try knock that tall poppy syndrome out of your life, and possible to from around you, because when you stop doing it, the people around you stop doing it, which is really important for children. Okay. Mwah, have a great night guys. And remember we are all the same. There are no tall poppies. Okay. None, poppies are left for Anzac Day. Bye.