Evening gang. I have FOMO. It’s clear, it’s sad. I haven’t got the care button on Facebook. Okay, all jokes aside, I’m actually really upset. Does that seem stupid or what? Now, for those of you that know me, in my business or personal life, you know I care, I’m one of those people you can pick up the phone to and talk to at any time about anything, and with an open nonjudgmental heart. Well, I try my best to have an open nonjudgmental heart, I’m there and I’m listening, and holding space, and caring, and loving, and all of those things. And I don’t often actually toot my own horn, but on that I’m really bloody good at, and I haven’t got the care button. I’m sad. I know that seems really stupid.

FOMO’s one of funny things. There’s FOMO, which is fear of missing out, and there’s JOMO, which is joy of missing out, which a lot of the time people joke about having JOMO when they’re really introverted. Oh thanks yeah, show me your care buttons why don’t you. JOMO, an introvert, for example, is really happy when they don’t have to go to a party, so they’ve got JOMO because they don’t have to go. So it’s the joy of missing out. And FOMO is when something’s going on and you’re missing out on it. And I don’t often have it, I truly don’t. I’m pretty good at going, okay, I’m really happy for that person, they’re doing that. Or I’m really happy for that circumstance, or I’m really happy they’ve succeeded in that. I can generally always find and a positive about something so I don’t feel like I’m missing out, or I’m left out, or anything like that.

Until Facebook introduced the care button. Yeah. I’m like, man, don’t ever tell me your troubles again because the world has spoken and I don’t care. In fact, why am I doing these Lives? Because clearly, I don’t care, or Facebook things I don’t care. Can someone hack me a care button? So I’ve spent some time this afternoon, I know this seems so stupid, I was like, “How to get care button when you don’t have it.” Yes, that’s what I’m [inaudible 00:02:23] I’m like, but where is? Someone said, update your app, I updated my app. No care button. Went online, no care button. 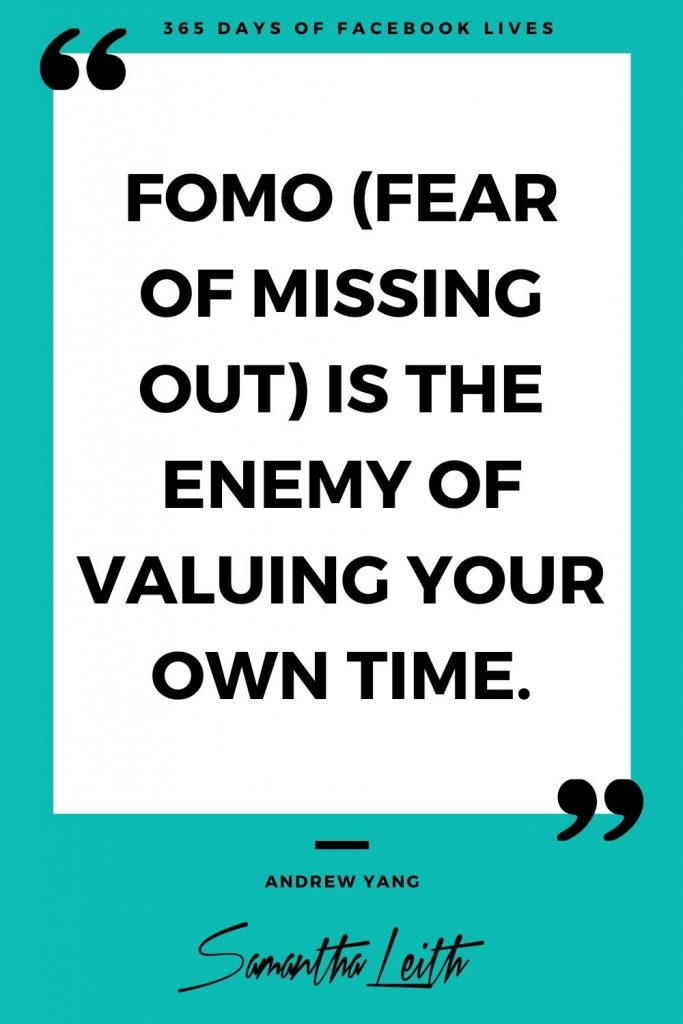 So I might create my own care button. I’m might just create my own Facebook, because don’t go telling me I don’t care Mr. Facebook, Mr. Mark Zuckerberg, I care. Truly, FOMO is one of those ridiculous things to feel, because if you’re not a part of something, chances are there’s a reason you’re not a part of that thing. Whether it’s an invitation to a party that you didn’t get, or it’s something, you didn’t get told about a promotion at work. There’s probably a reason you didn’t, you might not have been suited to it, you might not have been invited to the dinner party because there were five people with really opposing political views going to be at that dinner party and your best friend thought you would get really, really drunk and tear shreds off them so it wasn’t going to make for great dinner party conversation.

So when you are feeling FOMO-itis, is that a word? We’re going to make it a word. When you’re feeling FOMO-itis it’s really important to think logically, take the emotion out of it and think, okay, well, why haven’t I been included in this? Or, why can’t I go on that holiday? You know what? Because I can’t afford it. There’s logical reasons, nine and a half times out of 10, for any of those times you feel FOMO. Apart from the Facebook care button. Seriously, the Facebook care button, go with me. If anyone knows anyone that works of Facebook, send it my way, thank you very much.

Honestly, it’s ridiculous. I feel ridiculous about it, but I want that care button. It’s got me thinking, one of the things that I, or we all… thank you, thank you Johnny. Can you imagine how upset that I don’t have it though. It’s just bonkers, like meh, give me that bloody care button. [inaudible 00:05:00]. When we are feeling FOMO-itis, as we’ve just recently called it, and I have touched on the fact that it’s nine times out of 10 completely irrational, we have to ask ourselves, what is that missing out mean to us? What does it meaning to us? Because it will be meaning something more to us than the actual thing we’re missing out on. You know what I mean?

So take the example of friends having a picnic, and you’re not getting invited. Again, completely rational, they know it’s spring, you get really bad hay fever, so they thought they were not going to invite you to a picnic, they’ll catch up with you somewhere else where there’s not a whole lot of pollen. Okay, let’s go with that for a rational reason. But in your mind, you’re making that little act mean so many things. It’s meaning that conversation you last had with your friend clearly pissed them off because you said that bit about their mother and Oh my God, it must’ve really upset them. You might make it to mean… whatever it is you pick apart conversations that you’ve had, situations that you’ve had, to find a reason to rationalize why you’re missing out on something, when it’s irrational.

For you to feel like that is irrational. You not being included in something is not someone holding up a card and going… I need a blank sheet of paper. You are hopeless. Me not getting the care button does not mean Samantha, I’ll just try and write this quickly, Samantha Leith does not care. Okay. So Facebook not giving me the care button is not a big sticker on my head saying, I, Samantha Leith, does not care. That’s not what it is. It’s some silly little algorithm. It really is. But its made me make all these jokes about not caring, its made me do this Live about FOMO.

No, actually I don’t often get FOMO, I really truly don’t. And for an extrovert, I sometimes actually do get JOMO, joy of missing out on things, because I might not be in the mood, or somethings going on in my life. But it is because I take that step back and think, what is the real meaning behind it? Is there a logical explanation, am I overreacting? This is one of those things where if you go back to, I can’t remember the numbers of any of them now, but if you go way back to the beginning of my Facebook Lives, I did quite a big one on a think process called The Work by Byron Katie. I’m not going to go through it all now, but really go back and watch it or read the blog post about it, because it’s brilliant.

So I challenge you, next time you are feeling a little FOMO-ish, even if it’s someone’s sourdough baking extravaganza on Facebook and you’re sitting at home going, “Oh my God, no one gave me any sourdough starters. I mustn’t be good enough to make sourdough.” And you go into that kind of FOMO mode. It’s not logical. They didn’t give you the sourdough starter because they were in quarantine and they couldn’t get it to you. Not, they didn’t think you could make sourdough bread. Whatever it is, wherever you’re feeling, that fear of missing out, just ask yourself those questions when you think thinking there’s a reason why you’re missing out, is it true? How do I know it to be true? Is it true? How do I know it to be true? And really search for what you’re making that mean, really, really search for it, because chances are, it’s absolute bullshit you’re making up in your head, and your heart, and you need to go over that. And we can help you with that. Back to my newsreader voice for the night.

So in the meantime, if you could just send me caring emojis, because I don’t have one, that would be really great. Or send me flowers, that would probably make me feel good too. Wine, chocolate, anything to make up for the fact that I, Samantha Leith, do not care. Have a great Saturday night everybody. Thank you for tuning in for this ridiculous Facebook Live, and I will be back to my caring self tomorrow. And who knows, maybe I’ll get an extra button.